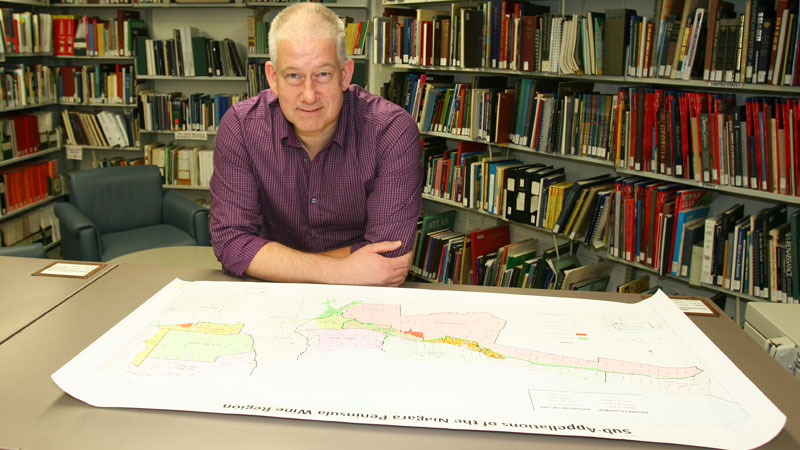 Wine is an integral part in Niagara’s identity, but not everyone feels included in it.

More than the Welland Canal or the Underground Railroad, Niagarans feel that tourism and wine defines the area. But it’s a dynamic that makes some feel excluded, said Michael Ripmeester, professor and chair of the Geography department.

Those are the findings of a recent study by Ripmeester and Russell Johnston, professor in Communication, Popular Culture and Film. Ripmeester will present the findings on April 28 with “Memory in a bottle? Heritage, identity and wine in Niagara,” the first event of the Cool Climate Oenology and Viticulture (CCOVI) Lecture Series. The series starts Jan. 19 and runs until April 28 at Brock.

Ripmeester and Johnston interviewed hundreds of St. Catharines residents in 2005, 2008 and 2009 about what they thought defined Niagara. Rather than references to the War of 1812 or Laura Secord, many people associated Niagara with wine.

But some residents feel ambiguous about that identity, Ripmeester said. In a traditionally blue-collar area where many are looking for work, the wine industry is seen as being for people with higher incomes.

“All of these things build a little bit of animosity,” Ripmeester said.

Such sentiments are common in areas where gentrification has taken place, he said. Examples include Soho and Greenwich Village in New York City, or the spread of the Queen West area in Toronto, where “shops that were seen as being for everyday goods have been taken over by high-end coffee shops,” he said.

Ripmeester hopes to interview residents in other areas of Niagara about wine and the region’s identity.

The study’s findings have been published in a number of venues, including Covering Niagara: Studies in Local Popular Culture, edited by Prof. Barry Grant and adjunct professor Joan Nicks. Ripmeester also plans to publish A Companion to Niagara Wine with fellow Geography professors Christopher Fullerton and Phillip Gordon Mackintosh in 2011. The book contains contributions from about 17 Brock academics from various faculties.

This year’s fourth annual CCOVI lecture series is the largest yet, with researchers, fellows and professional affiliates from across Canada participating.

Click here to view a PDF of the full lecture series schedule.