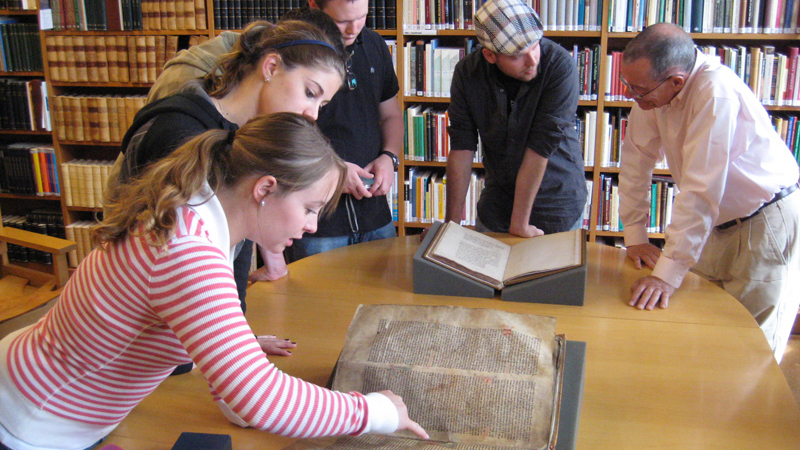 Students examine an historic text known as the Flateyjarbok at the Arni Magnusson Institute in Reykjavik.

As part of a new Medieval and Renaissance Studies course, known as MARS 3F50, 19 students headed to Iceland in June to pore over historic texts, visit burial grounds and examine historic sites they’d learned about the month before. It was the inaugural journey of a course the department hopes to offer every two years, said Andrew McDonald, professor of History.

The course, titled Heritage of Viking and Medieval Iceland, is taught by McDonald and Angus Somerville, associate professor of English Language and Literature. The pair recently edited The Viking Age: A Reader, a book released on April 15. They were looking for a way to combine academic with experiential learning. Iceland, which counts the medieval Icelandic Sagas among its wealth of preserved textual material, was an obvious choice, McDonald said. The course focused on the Viking age and medieval Iceland between 870 and 1300.

In Iceland, students received lectures, workshops and seminars from the leading figures in medieval Norse and Icelandic studies, Somerville said.

“Context is all-important in understanding a culture,” he said. “In Iceland, our students saw the physical environment which gives so much of the meaning to medieval Icelandic literature and history. When they saw the place, the reason for cultural developments became much clearer.”

The students visited various sites, including:

“It is a completely different learning experience to see places and things in person as opposed to looking at images or reading texts in class,” she wrote in her post-trip statement. “Through this trip, I was able to gain a certain respect for Icelandic culture as Icelanders seem to greatly value their past.”

The trip gave the students a deeper understanding of the often-misunderstood Viking culture, McDonald said.

“People are fascinated with the pillage and plunder image, but when you get into the study of it, the reality is much more interesting,” McDonald said. “People are amazed to learn that these people were farmers and fishers and explorers and poets.” Students listen during a workshop on the scientific study of manuscripts at the Arni Magnusson Institute in Reykjavik.

Links:
• Viking Heritage in Iceland — photos
• Links to blogs of the Iceland experience