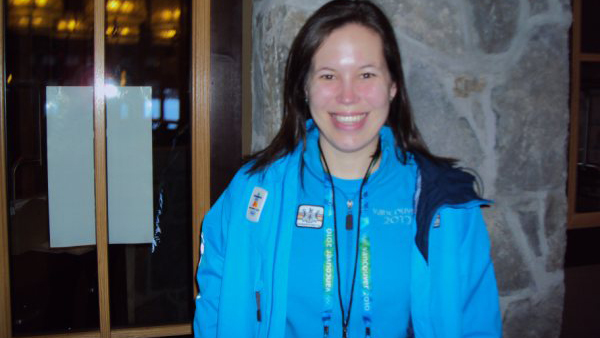 Milaina Lagzdins is a Brock alumna playing an important part in the Olympics in Vancouver this month. Lagzdins, 27, is doing drug testing on athletes at the 2010 Winter Games. The Burlington resident graduated in 2008 with a Master of Arts in Applied Health Sciences (Sport Management). She also played on the Brock women’s basketball team in the 2005-06 and 2006-07 seasons. In the 2007-08 season, she was assistant coach.

Lagzdins took some time during her preparation for the Winter Games earlier this month to describe what she’d be doing in Vancouver. She is there from Feb. 8 to March 2.

What will you be doing at the Olympics?

I am volunteering as a doping control officer at the Whistler venues. I will be collecting and processing athletes’ urine samples and then sending them to the lab for testing. Approximately 2,000 tests will be conducted at the 2010 Olympic Games. There are very strict procedures involved in drug testing. To be eligible to volunteer in this role, I had to attend numerous workshops and have over two years of practical experience.

How did the opportunity become available to you?

I am contracted by the Canadian Centre for Ethics in Sport (CCES) and work as a Doping Control Officer for the domestic anti-doping program. All national-level athletes, university and college athletes plus some competitive amateur league athletes in Canada are subject to drug testing. The Canadian Olympic committee asked the CCES to supply the doping control officers at the Olympics and I was asked by CCES to volunteer for the games.

How do you feel about being part of a monumental event in Canada?

I believe this will be a once-in-a-lifetime experience for me. I am very excited to take part in this celebration of athletics. I’m also a strong advocate of ethics in sport and am thrilled that I will have the opportunity to play a role in making sure Olympic competition is conducted in a fair and ethical manner.

Do you have a favourite winter sport to watch at the Olympics?

Last year, I was part of the doping control team at the World Cup of Bobsleigh in Whistler. This sport was amazing to see live and I’m very hopeful that I will be able to watch some runs while I’m in Whistler.

Anything else you’d like to add about yourself, your experience or your involvement at the Games?

I work at the Royal Canadian Golf Association and part of my job is to organize volunteers for the RBC Canadian Open and CN Canadian Women’s Open. I’m looking forward to being in a reverse role and being the volunteer at such a monumental sports event. Hopefully I will be able to bring back some ideas to help make Canada’s professional golf tournaments even better.