Fifth-year Interactive Arts and Science student and Faculty of Humanities Intern Ellen Thornton had the opportunity to interview recent History alumnus Matt Busnello about his upcoming work with the Chabad Jewish Centre of Niagara in Welland. 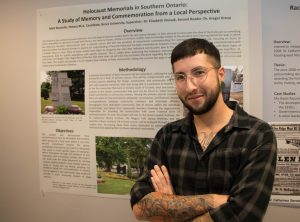 Matt Busnello is helping to create a Holocaust memorial in Welland in partnership with the Chabad Jewish Centre of Niagara.

Through his research, Matt Busnello (BA ’16, MA ’18) has learned about the horrors of the Holocaust and the resilience of its survivors.

The recent Brock Master of Arts in History graduate is now using his work to give back to the local community, helping to create a Holocaust monument to be built in Welland.

Busnello, who graduated at the University’s Oct. 12 Convocation ceremony, has partnered with the Chabad Jewish Centre of Niagara on the project. He has created a design contest for the monument, to be erected in the Anshe Yosher Jewish Niagara Cemetery — the oldest Jewish cemetery in the region.

“The purpose of the Holocaust and Jewish Welland Memorial is to offer Jewish people who live in Niagara, as well as visitors to the Chabad Niagara Jewish Welcome Centre, a place to commemorate the victims and survivors of the Holocaust,” Busnello says.

The Brock alumnus is running the monument’s design contest, which is open to submissions from the public, and putting together the committee that will help decide the winner.

The monument is expected to be unveiled in June 2019 to coincide with the cemetery’s centennial. It will be placed in an accessible location on the Lyons Creek Road property, adding to the region’s list of Holocaust memorials, which also stand in St. Catharines and Niagara Falls.

“This project means a lot to the people in the community,” Busnello says. “We’ve had an outpouring of support from community members but also from people who once lived in Niagara who want to participate and get involved. It’s been really special in that way.”

Busnello says Brock’s 20th century European, German and world history courses nurtured his interests as an undergraduate and motivated him to continue studying the Holocaust as a graduate student, working with Associate Professor Elizabeth Vlossak.

“Since much of Dr. Vlossak’s work deals with memory and the politics of commemoration, she suggested that I examine how the Holocaust has been remembered in Canada, specifically among its Jewish population,” he says.

His research focuses on local forms of commemoration in southern Ontario and how it connects to the larger culture of Holocaust commemoration.

Busnello says his Brock experience “played a big role in getting me to where I am today.”

“I don’t think I would have been able to take on a project of this size if I didn’t have this kind of background.”

Busnello is eager to see the results of the design contest, which is open to the public but has also been marketed to architects and architecture firms, designers and independent artists.

“We’re really going for transparency, not having it limited to any one group of people, trying to keep it open and allowing for a fair and open competitive contest,” he says.

For more information about the design contest, or about the Chabad Jewish Centre of Niagara, visit the organization’s website.