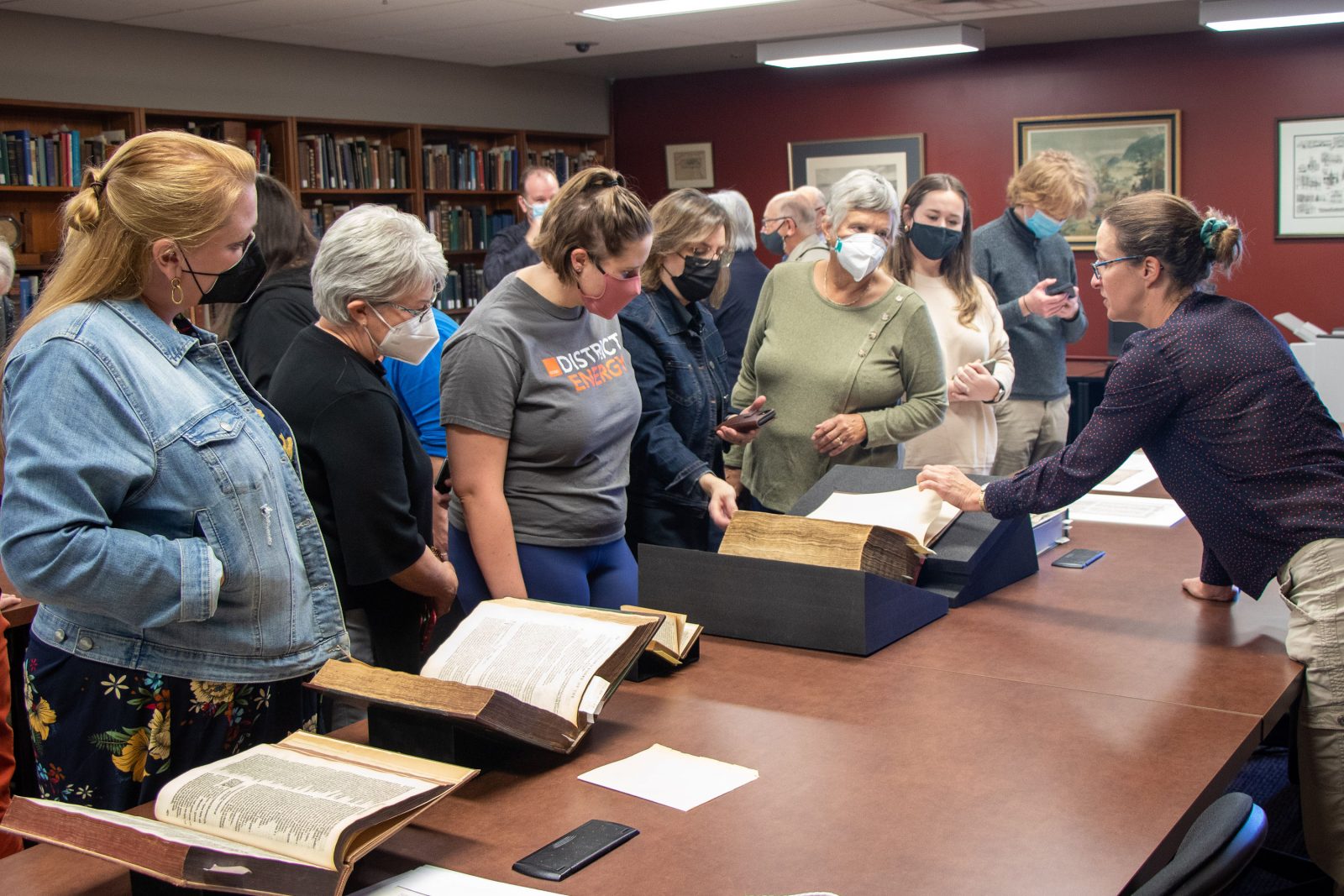 Professor Leah Knight, right, shows tour participants some details in Sir Walter Raleigh’s History of the World in Brock’s Archives and Special Collections as part of the Archive Crawl event held on Sept. 29.

Book lovers and historians alike were drawn to a recent tour that gave access to two rare collections of texts, documents and illustrations housed on Brock’s main campus.

The group was able to view some of the oldest materials in Archives and Special Collections, including a page from a medieval Bible dated to c. 1200 CE; the famous Clopton Charter from Stratford, England, from 1241 CE; a letter from King James VI of Scotland; and John Gerard’s Herbal history of plants from 1597. MARS professors Andre Basson, Leah Knight and Andrew McDonald were on hand to share their expertise.

The tour continued at the Concordia Lutheran Seminary’s Rare Book Room, home to rare books dating back to the early 16th century. Texts and woodcut illustrations on display highlighted the importance of print culture to the 16th century Protestant Reformation.

Featured items included a 1562 edition of Martin Luther’s writings with an early printing of his 95 Theses; notated liturgical music from 1592; a Danish-language Luther Bible from 1589; and Flavius Josephus’s history of the Jewish people from 1574, “complete with bookworm hole,” says Sarah Cavanagh, Librarian and Bookstore Manager.

“We also have a small but aesthetically-beautiful selection of early 20th-century German books designed in art nouveau and art deco style, among them Oscar Wilde stories and fairy tales by Hans Christian Andersen and Wilhelm Hauff,” she says.

Other books on exhibit at the Rare Book Room offer a glimpse into the lives and history of their owners, featuring unique inscriptions, notations and painstaking and surprisingly creative book repairs, proving there are more stories hidden in old books beyond what is printed on their pages.

“I’m excited that the participants had a chance to discover some of the fascinating documents held in these two neighbouring collections,” says Renée-Claude Breitenstein, Associate Professor of French with the Department of Modern Languages, Literatures and Cultures, and Director of the Centre for Medieval and Renaissance Studies.

“My hope is that the time spent learning together, walking together and exchanging about the past will pique the participants’ curiosity for these fascinating periods, encourage them to learn more and go back to the archives, and maybe even open new research perspectives.”