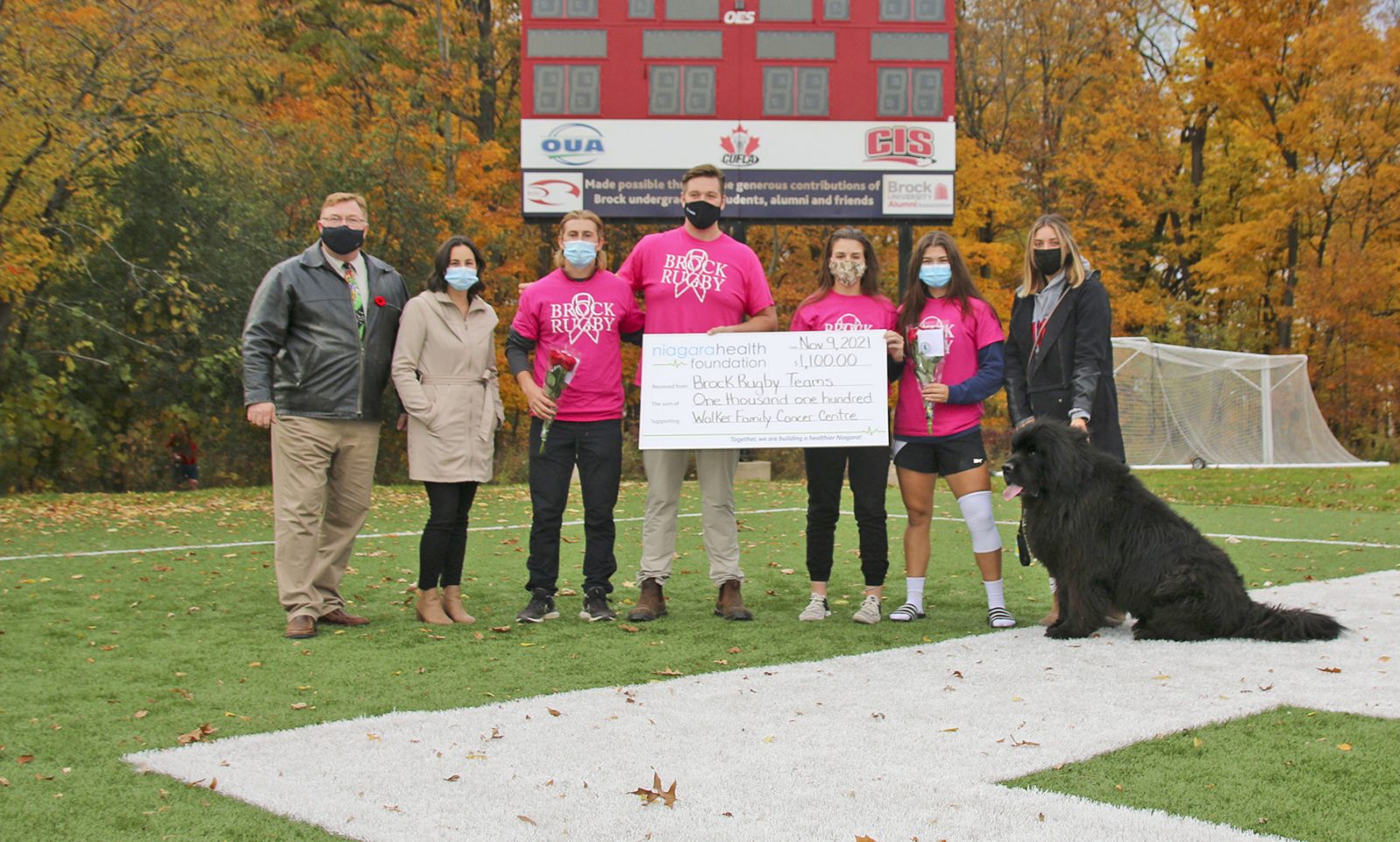 A donation to a local hospital by the Brock women’s and men’s rugby teams held special meaning for two student-athletes.

The Badgers donated $1,100 to the Walker Family Cancer Centre during a ceremony at Alumni Field on Wednesday, Nov. 10. The donation will help cover the cost of chemotherapy treatment chairs.

Carter Filion and Natalie Dzamba of the Brock men’s and women’s rugby teams led the donation campaign, each with a personal connection driving their need to see it succeed.

Filion recently lost his mother, Barbara Tomenson-Filion, after a long fight with triple-negative breast cancer, which is considered a more aggressive form of the disease.

Dzamba’s grandmother, Agnes Gowans, was able to overcome breast cancer, and her mother, Frances, is currently undergoing chemo treatment after being diagnosed in April.

The impact the Badgers’ donation will have locally, and the importance of raising awareness of the worthy cause, was not lost on Filion, Dzamba or their teammates.

The hospital donation comes on the heels of the Brock rugby teams holding a fundraiser for the Iroquois Roots Rugby Foundation, an Indigenous-led program that promotes rugby to First Nations.

“One of the life lessons my mother taught me as a kid was always to give back and help others,” said Filion, who is working on his Master of Applied Health Sciences. “Based on our success with our teams’ fundraiser for the Iroquois Roots Foundation last month, I thought we could do a fundraiser to donate to one of the larger cancer centres in the area, especially the one that helped so much with my mother.”

Filion has experienced a wealth of support from his teammates during this difficult period in his life and said the Brock rugby community “means the world” to him.

Barbara Tomenson-Filion would have turned 52 on Oct. 25. Just days before her birthday, the first after her passing, the Brock men’s rugby team played Laurier in a must-win game to make the playoffs.

Before the game got underway, Filion’s teammates asked him to write his mother’s name on their wrists.

“They told me they were playing for my mom today. It was tough to hold back the tears,” said Filion, a St. Catharines native. “I’d like to think she helped us out in some way in that comeback victory. My dad was at the game, and the whole evening was pretty special.”

In her younger years, Dzamba witnessed the battle her grandmother went through to overcome and successfully beat breast cancer.

Her heart sunk when years later her mother said she was having tests run because of a suspected trace of breast cancer in her lymph nodes and breast.

“The results came back positive. Since April, my mum has had weekly checkups and chemo. This was very difficult at the beginning and through the physical and mental battles of chemo,” Dzamba, a fourth-year Community Recreation student, said. “My mum has been fighting it this long and makes it look easy as she continues with work and everyday life.”

In support of Dzamba’s mother, the Brock women’s rugby team wore pink ‘Ruck Cancer’ T-shirts as part of their warmups and sideline uniforms during matches.

“The support from my Brock rugby community was more than I could ask for. I will be forever grateful for this group and the program’s involvement,” Dzamba said. “This initiative is close to my heart and gives other women like my mother some extra encouragement and love. She is one of my biggest role models, and I am proud of her every day.”