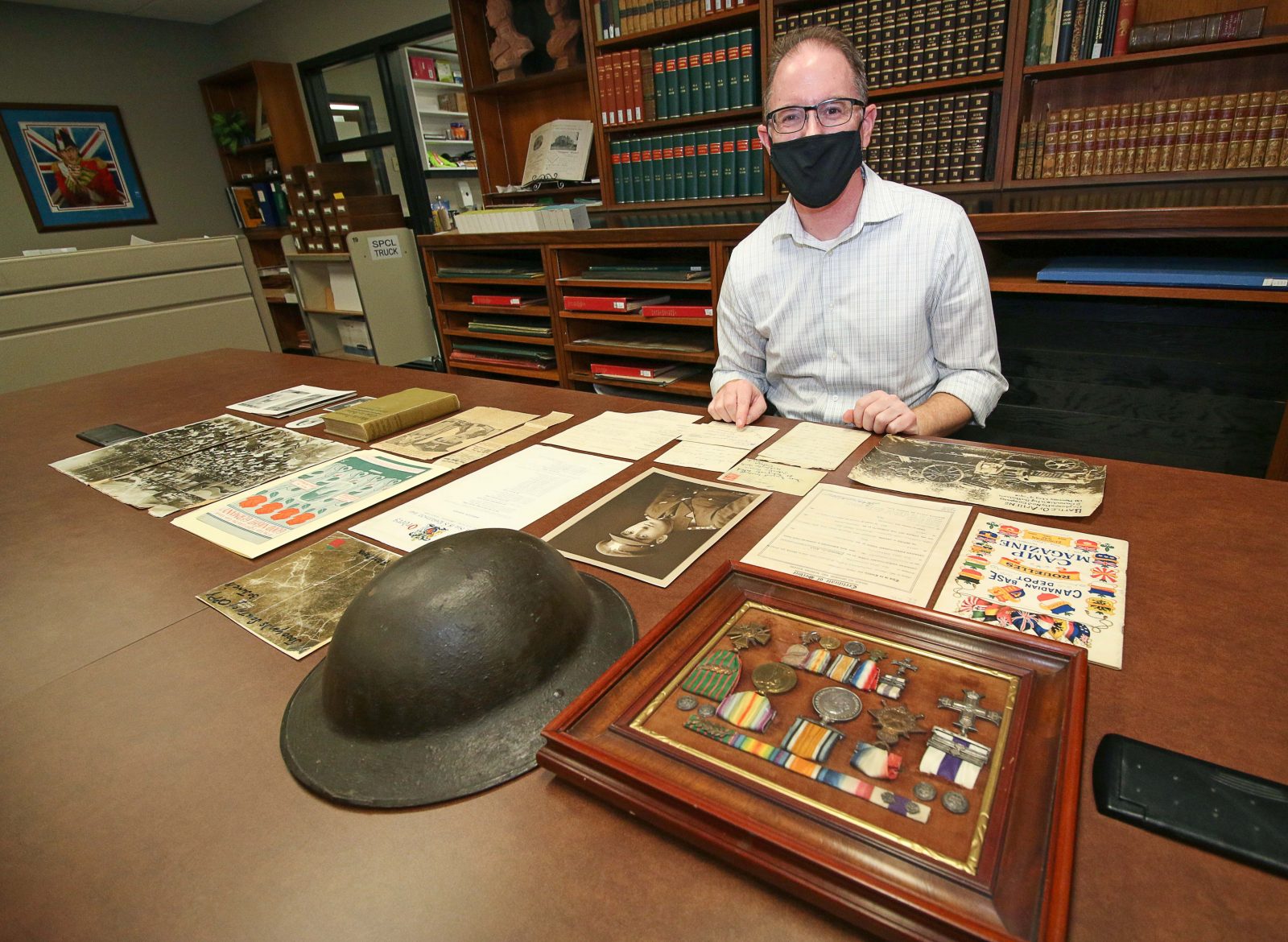 The Brock University Library’s Archives and Special Collections houses some of the most unique and valuable records representing all aspects of Niagara’s history, including a wide range of historical items related to the First and Second World Wars.

David Sharron, Head of Archives and Special Collections, said although each collection is significant in its own way, the records that cover the World Wars and other modern conflicts evoke a different reaction.

“There is an immediate reverence for both the individuals who fought the battles and those who supported the war effort from home,” he said. “These records remind us of a time when people and organizations made sacrifices and pitched in to do their part. It was difficult and often tragic, but as a community, Niagara made it through.”

Collection highlights include a letter from a father serving oversees to his young daughter; a trench helmet and rucksack used in the First World War; documents on the City of St. Catharines’ war preparations and measures; photographs of fundraising parades to support the war; oral histories from the Niagara Mennonite community; and postcards from a military training camp in Niagara-on-the-Lake.

Sharron said with some of the wars happening so long ago, many of the people who experienced them are no longer alive to share their story.

“Their history and voices held in these records help us remember,” he said. “It’s why we preserve them and make them available.”

While many of the collections are digitized and available online for anyone to access, including the records Sharron curated below, there are millions of documents and artifacts housed in the physical archives.

“The online collections are just the tip of the iceberg,” he said. “There is always more to the story; a fuller history unfolds as you sift through a box of documents or flip through books from that era.”

Brock University’s Archives and Special Collections is open to the Niagara community as well as Brock students and researchers. The public is invited to access the physical collections on the 10th floor of the James A. Gibson Library in Brock University’s Arthur Schmon Tower Monday to Friday from 9:30 a.m. to 4:30 p.m. Writing ahead of a visit to archives@brocku.ca is recommended in case a class is occupying the space or the reading room is full. Vaccination and mask protocols are in effect.

Laura de Turcynowicz (nee Blackwell)
Laura de Turcynowicz was a famous opera singer from St. Catharines who married a Polish Count and was living in Poland when the First World War began. The Prussian Army occupied her home for several months before she escaped to the U.S. She wrote a book about her ordeal and raised money for the suffering people of Poland. In 1918, de Turcynowicz was instrumental in promoting the training and education of young American women of Polish descent to help with war relief efforts in Poland. The group became known as the Polish Grey Samaritans.

Percy Carruthers Band
Percy Carruthers Band was a decorated First World War soldier who earned the Military Cross with two bars and the French Croix de Guerre with Palm. He was also the former caretaker of the Brock Library’s Woodruff and Post Office collections. Among other records in this collection are letters from his sweetheart Margaret Woodruff from St. Catharines, photographs, military documents, a trench helmet and rucksack from the First World War, and medals he received for courage and determination.

Samuel DeVeaux Woodruff
The Woodruff family of St. Catharines came to Canada from the U.S. in 1795. They were an integral part of the Village of St. Davids and played an active role in the battles fought in Upper Canada. Samuel DeVeaux Woodruff was killed in action during the First World War as a member of the 116th unit of the Queen’s Battalion of the Canadian Infantry (Central Ontario Regiment).

Niagara Camp
Niagara Camp was a military training camp in Niagara-on-the-Lake that was used as a summer training grounds for infantry, cavalry and artillery. Postcards of Niagara Camp were common. This collection features postcards from the early years of the First World War.

Mennonites of Niagara
Oral history interviews of members of the Mennonite community who came to Niagara from Europe after the upheavals of the First and Second World Wars.