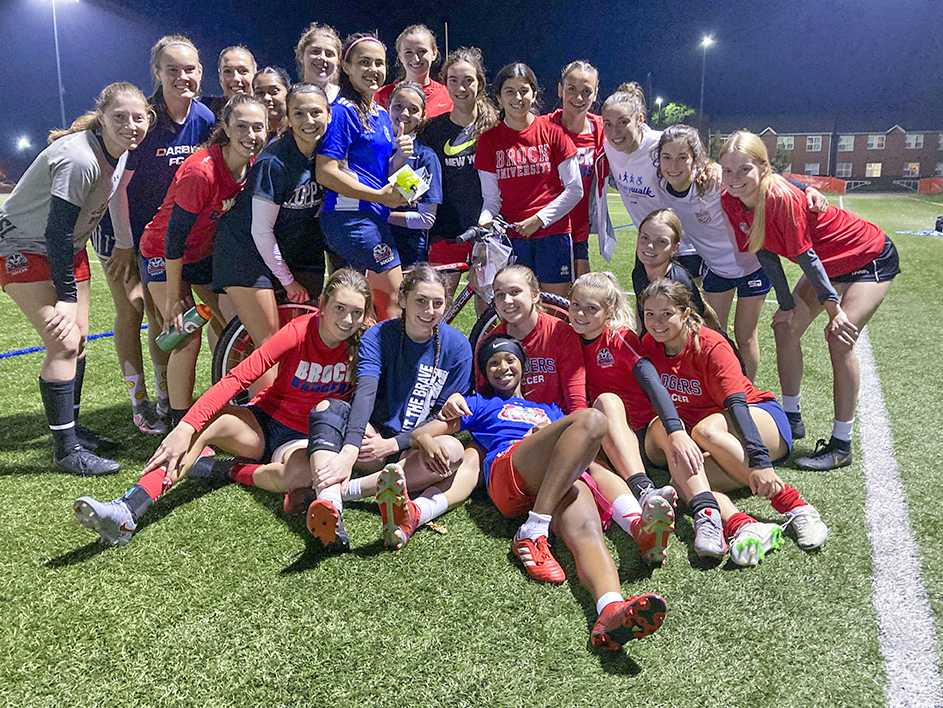 The Brock women's soccer team surprised their teammate, Luisa Argento de Almedia (centre, thumbs up), with a new bicycle after hers was recently stolen.

Argento de Almedia didn’t take the 1-0 home loss to Laurier on Wednesday, Oct. 6, lightly. She paced the sidelines after the game and reviewed with her coach, John Di Pasquale, what more she could have done.

She felt compelled to leave everything on the field for her teammates after experiencing what she called one of the most “heartfelt moments” of her life.

She joined the team in 2020 during the COVID-19 pandemic, so she hasn’t fully experienced what it’s like to be a Badger, yet the night before Brock’s match with Laurier, she did.

A few weeks ago, Argento de Almedia, a second-year international student from Brazil, received a bike from her parents. They wanted their daughter to have a mode of transportation to get from her residence across campus to Alumni Field and to meet up at the Pen Centre with her friends and teammates.

“Luisa came to practice sad one day,” said third-year midfielder Arnelle Douglas. “I asked her what happened. She explained how she just got a bike and it was stolen. My heart broke for her, as her experience in Canada hasn’t been the smoothest so far.”

Douglas and the Brock women’s soccer team pooled their money to buy their teammate a new bike.

“As her teammates, we are her new family and we need to look out for her,” Douglas said.

The team chose to surprise Argento de Almedia after training on Tuesday night.

She couldn’t believe her eyes when a teammate rolled up with a brand new bike as a gift for her.

“I was not expecting that at all. I got so emotional when I saw them roll in with the bike,” Argento de Almedia said. “I almost cried on the spot.”

Her mother reached out to Douglas and Adrianna Belfer-Marin, the teammates who spearheaded the cause.

“Luisa’s mom personally reached out and was put in tears with this gesture,” Douglas said. “Seeing how easy it was to co-ordinate with the teammates to get this going showed how loving and family-oriented we are, and that is what Brock women’s soccer is all about.”

Argento de Almedia and the Badgers look to bounce back when they visit Wilfrid Laurier on Saturday, Oct. 9 at 6 p.m.

“I’ve never experienced anything like that from a team before. My time at Brock and with this team so far has been such a special experience,” said Argento de Almedia. “We’re only three games into the season and this is the best squad I’ve ever been on in my life.”