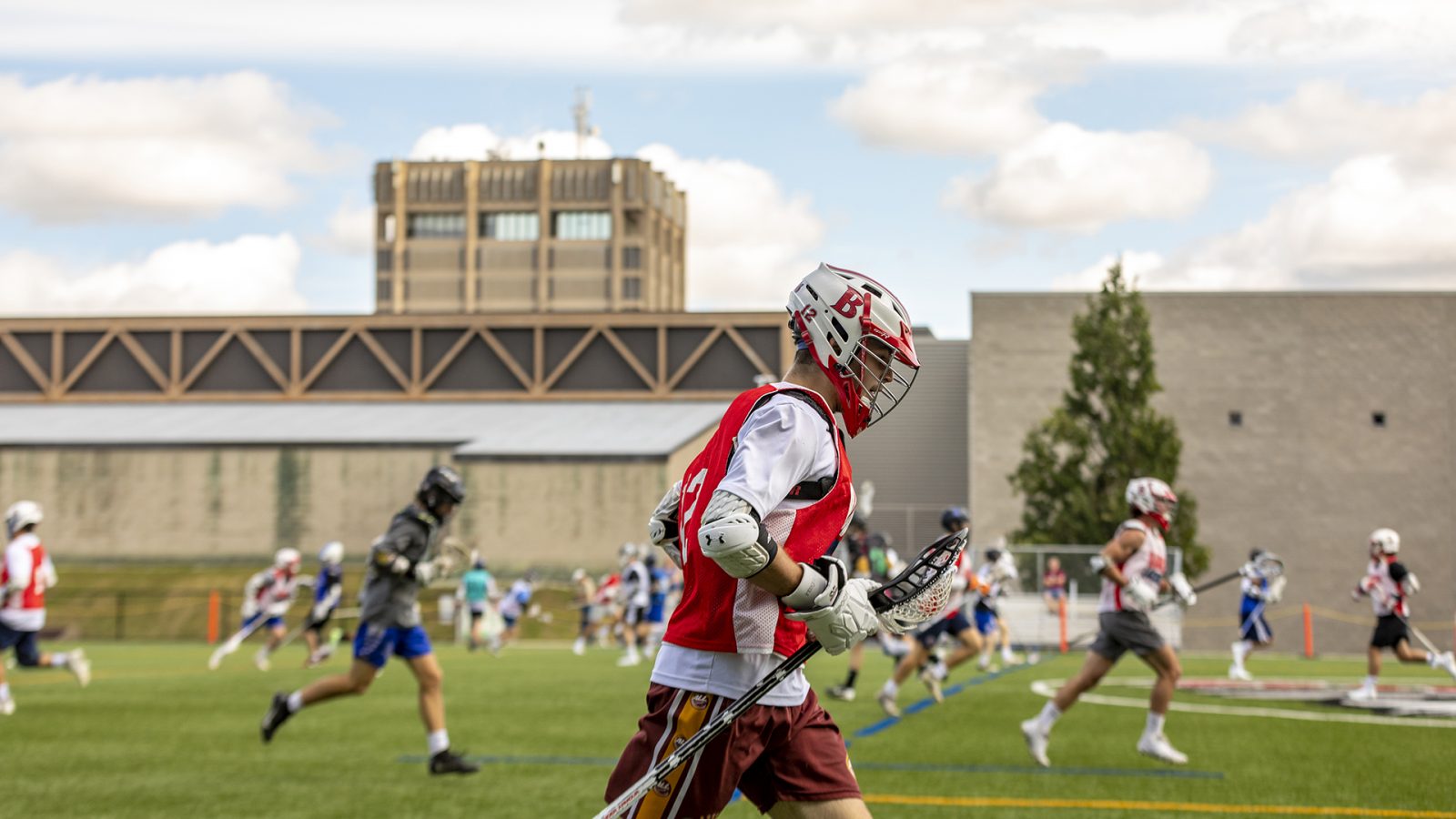 The men’s lacrosse team was the first Brock Sports team to open training camp as the Badgers make their return to sport this fall.

Vince Longboat was surveying the scene at Brock University’s Alumni Field on a sunny Friday afternoon.

Longboat and the men’s lacrosse team he is the head coach of was the first Brock Sports team to officially begin a training camp since the COVID-19 pandemic brought sporting activities and the world to a halt more than a year and a half ago.

The Badgers knocked off the rust as they ran through drills and scrimmages — looking to get their playing legs back before hosting McMaster University on Saturday, Sept. 18 to kick off the Canadian University Field Lacrosse Association (CUFLA) season.

“A little shaky at the start, but everyone is excited to be back on this field and putting in the effort,” said Longboat after conducting his first training camp session Friday, Sept. 3. “That’s all I ask of these guys. Give me 100 per cent and we’re going to be alright.”

Before they are allowed to participate, each student-athlete goes through a COVID-19 vaccination verification process as Brock continues to prepare for a safe return to campus this fall.

Students taking part in high-contact sports such as rugby, wrestling, hockey and basketball go through a rapid antigen screening test provided by the University before they take part in each training session.

This period of training camps is also serving as tryouts for each team.

On Saturday, Sept. 4, the men’s and women’s soccer teams have such a large group of students attending tryouts they’ve split their camp into multiple sessions.

“Myself and the coaching staff are excited to be back on the pitch and working with our student-athletes again,” said men’s and women’s head coach Lucio Ianiero. “We’ve been in touch with our players during the entire pandemic and know how hard they worked to prepare for this season.”

Brock’s winter sports teams begin their training camps during the week of Sept. 13 to 17 with hockey, volleyball, swimming, track and field and fencing getting started.

On Thursday, Sept. 16, the Badgers women’s basketball team opens training camp as it look to defend the Ontario Unviversity Athletics (OUA) championship it won in 2019-20.

The Badgers have a cast of new faces and begin their title defence without a few core players from the championship team, including OUA Player of the Year Melissa Tatti and star shooting guard Jessica Morris.

“It’s my job to meld these new players, put them together and create a cohesive group,” said head coach Mike Rao, who was named U SPORTS and OUA Coach of the Year in 2020. “Our University is a place where student-athletes can go on to do greater things. That’s our culture. There’s a desire to learn and work at the game from our players on and off the court.”