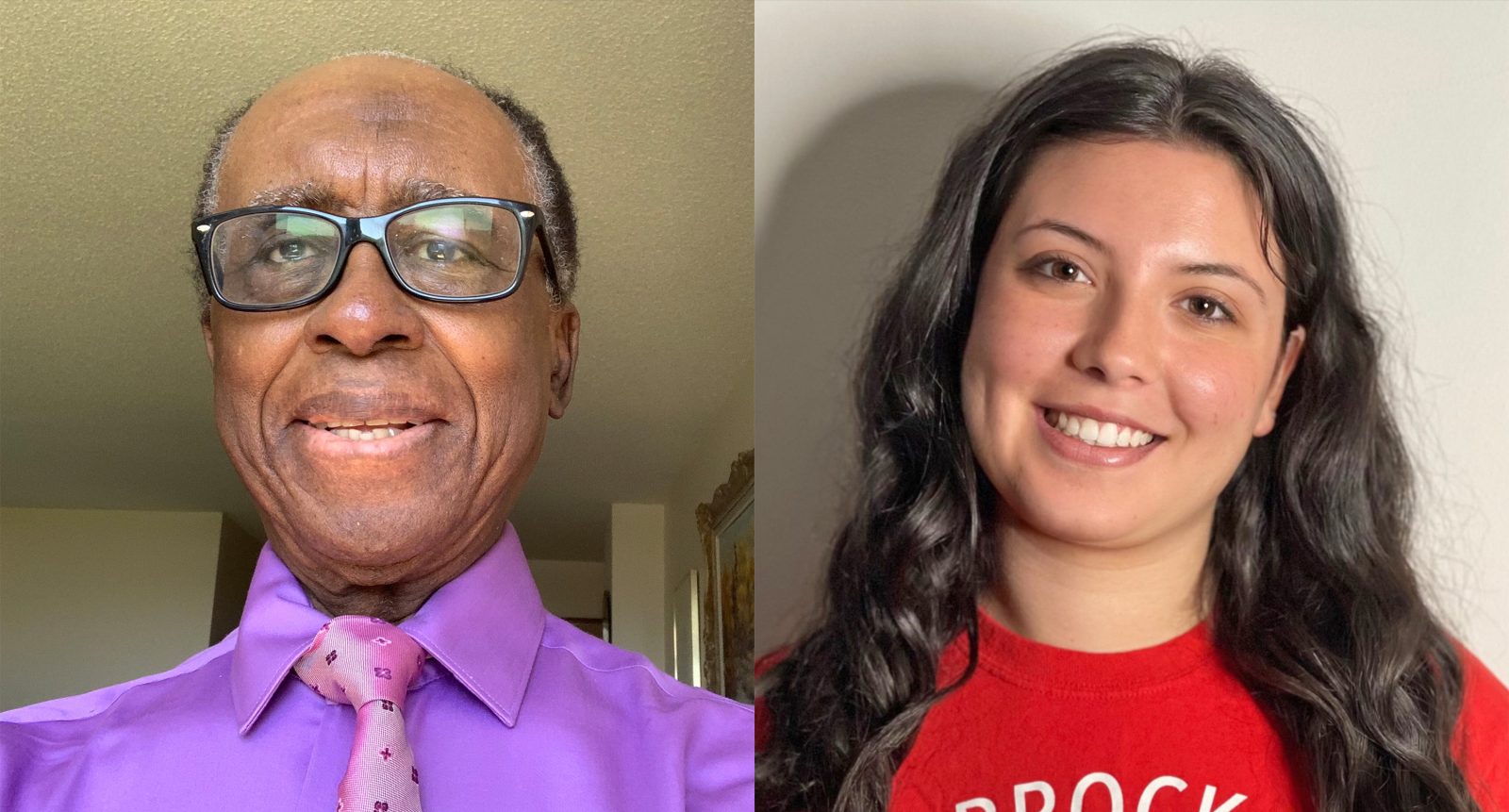 Faculty of Education graduates Edwin Laryea and Joyce Khouzam were recognized with the Board of Trustees Spirit of Brock medal during the University's Virtual Spring Convocation on Friday, June 18.

Despite being at different points in their lives, Faculty of Education graduates Joyce Khouzam and Edwin Laryea share a defining characteristic — the unwavering drive to give back.

During the recent Virtual Spring Convocation, the pair were honoured with the Board of Trustees Spirit of Brock medal for their leadership and outstanding contributions to the University and their respective communities.

Community involvement has been at Laryea’s core for decades, and the award offered an opportunity for the 80-year-old to reflect on his work in the field of education and volunteerism.

“For me, this award is a crowning achievement to the years I have dedicated to building cultural bridges, with a focus on anti-racism, equitable opportunities and representation for marginalized groups in all spheres of life,” said Laryea, who graduated Friday, June 18 with his PhD in Educational Studies.

The drive to fulfil his own potential brought Laryea from Ghana to Canada in 1960. He had stumbled on the details of a scholarship program in a magazine and applied for the opportunity to pursue post-secondary education abroad.

“What I found on the ground was completely different from what I had imagined,” he said of his arrival in Canada. “There was a lot of racism and discrimination, and I went through that throughout my career.”

Despite the challenges he’s faced, Laryea has persevered.

He studied French and Spanish in Canada, completing an undergraduate degree at McMaster and a master’s at the University of Toronto. He went on to spend more than 30 years as a high school teacher, department head, vice-principal and principal.

Laryea has always been a dedicated volunteer and activist. He has served as a board member, founder, president and vice-president for a number of community organizations and initiatives. He was also appointed National Director for a federal Community Capacity Building Project for African Canadians.

After retiring, he continued to look for ways to fulfil his potential and control his destiny after decades of being overlooked for leadership positions.

“My academic desire, which I had when I came to the country, came back and I started asking myself if I could do a PhD,” he said, adding his three daughters encouraged him to apply to programs.

Adjusting to being a student again after 45 years was difficult and he considered quitting after his first class, but with persistence and the help of his supervisor, he pressed on.

In his experience as an educator and community volunteer, Laryea encountered pervasive negative narratives about the academic abilities of Black youth, echoing his own experiences since coming to Canada.

“The more I work with the community, the more I found that some Black students were not doing well and the narratives about their educational experience were almost negative and that bothered me,” he said.

Inspired by the stories he heard from families while he was president of the African-Canadian Association of Waterloo Region, Laryea focused his thesis research on factors that African refugee-background students identify as being helpful to their academic success.

Now that he has completed his PhD, Laryea plans to share his knowledge by writing a book and contributing to the development of youth leadership initiatives.

Khouzam, who graduated from the Concurrent Teacher Education program on Friday, is also looking forward to her next steps.

She was honoured to be recognized with the Spirit of Brock medal, but credits her support system for her success.

“I had so many opportunities because of the people around me always,” she said. “I wish I could tell every single person that has helped me along the way ‘thank you so much.’”

Born in Egypt, Khouzam and her family moved to Saudi Arabia then Canada to pursue a better life when she was a child. Along the way, she was always taught to value education.

Community has been central to her Brock experience. After a difficult first year at another university, Khouzam came to Brock because of its welcoming atmosphere.

“Everyone was just so amazing at Brock,” she said. “All of the people really made my experience 10 times better.”

Khouzam immersed herself in the Brock experience, joining intramurals, working at the General Brock store, attending campus events and successfully running for Vice-President of Student Services (VPSS) of the Brock University Students’ Union (BUSU) in her third year.

She is particularly proud of her work to champion a menstrual equity project on campus. As a results, students have been able to access free menstrual products at the BUSU main office and the General Brock store, and menstrual product vending machines have been installed in several male, female and gender-neutral accessible washrooms.

Outside the classroom, Khouzam has served the local community through experiential education opportunities offered at Brock, including helping to run a professional development session on coding for elementary school teachers and working with Distress Centre Niagara on a coding and math project.

Balancing community, employment and academic commitments has sometimes been overwhelming, but Khouzam has persevered with the help of classmates and Brock’s student support services.

“My degree should have 10 other people’s names on it because I would not have graduated without all of my colleagues and all the support systems,” she said.

Khouzam plans to return to Brock to complete a Master of Science in Mathematics, with hopes of ultimately teach math at the post-secondary or secondary level.