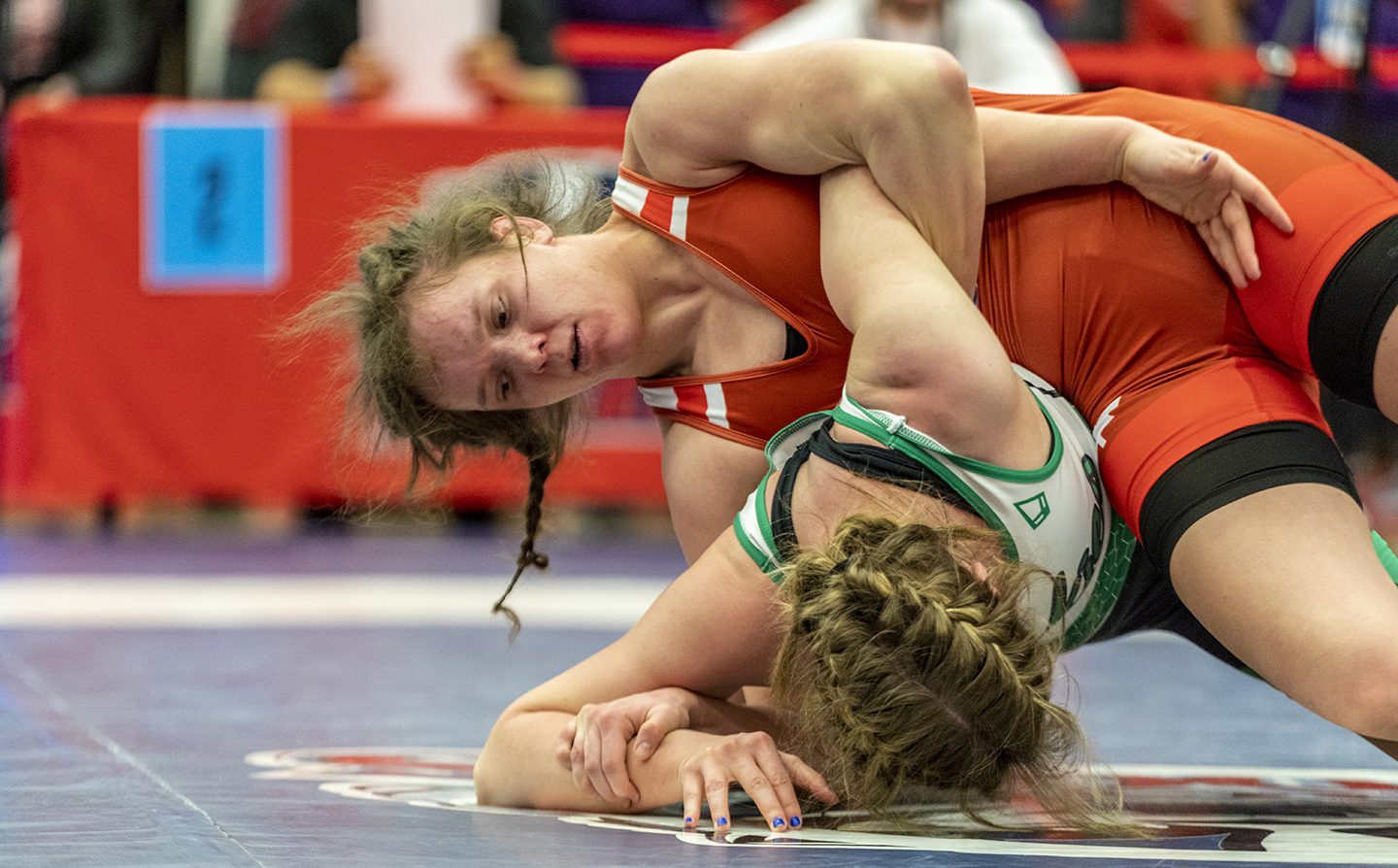 Julie Steffler overwhelms an opponent during the 2020 U SPORTS Wrestling Championships at Brock University in March. Steffler will graduate with a Master of Professional Kinesiology on Friday, Oct. 16.

Julie Steffler’s future physiotherapy patients can be confident they’re in good hands and are being treated by someone who knows the road to recovery from an injury all too well.

Steffler is one of more than 41 student-athletes who are graduating during Brock University’s Virtual Fall Convocation on Friday, Oct. 16.

She is graduating with a Master of Professional Kinesiology, which is the first graduate program of its kind designed to train students as leading practitioners in the health-care system. It’s an appropriate end to Steffler’s outstanding university wrestling career.

She won back-to-back gold medals at the Ontario University Athletics (OUA) and U SPORTS Wrestling Championships before being named the 2019-20 U SPORTS Outstanding Wrestler. In December, she competed in the Canadian Wrestling Trials in Niagara Falls. 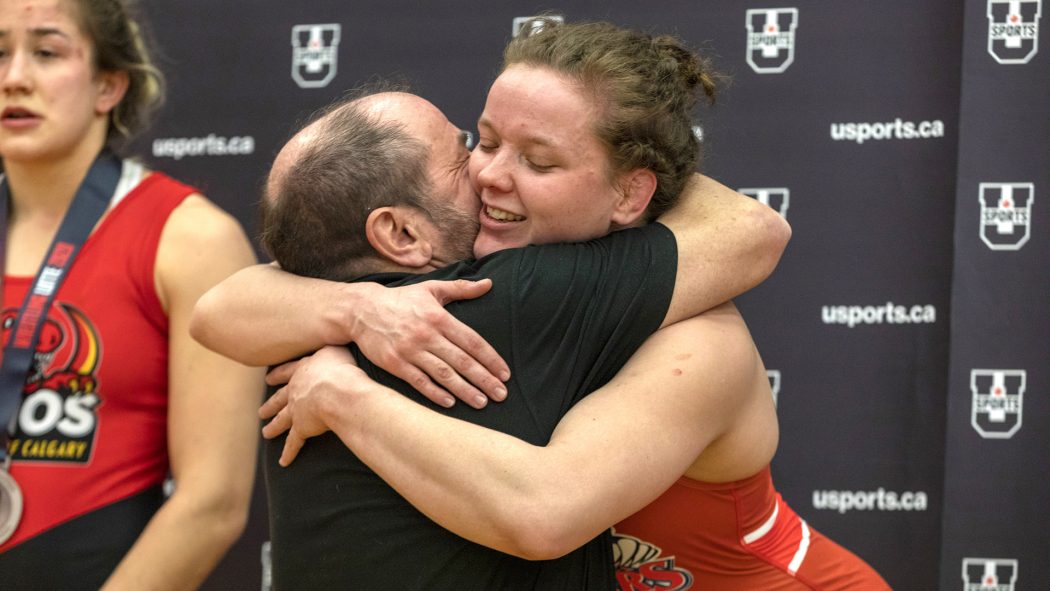 Julie Steffler hugs her dad, Bruce, after being awarded a national gold medal at the U SPORTS Wrestling Championships. Steffler credits her strength and courage to the example her dad set for her growing up.

Off the mat, Steffler earned her master’s by completing coursework and placement over three semesters. She recently wrote her Registered Kinesiologist licensing exam and is taking on extra course work to eventually become a physiotherapist.

She spent one of her semesters working with Power Cord, the Brock-run wheelchair accessible workout facility for clients with multiple sclerosis, Parkinson’s, spinal cord injuries and amputees.

“I had never worked with a disabled population before, so this experience was incredibly humbling,” said Steffler.

She then completed two consecutive semesters with the Niagara Health and Rehab Centre (NHRC) under co-owners Paul Skiba and Geoff Gamble.

After graduating with her undergrad degree from Western, Steffler faced a fork in the road when it came to her career path. She decided to switch to Brock after she was accepted into both the Master of Professional Kinesiology and Teacher Education programs.

“I went with my gut as the deadline approached to choose which program,” she said. “My choice in Kinesiology program gave me opportunities to try new fields within kinesiology as well as get a glimpse at what it might be like to be a physiotherapist, chiropractor or kinesiologist.”

Steffler is proud of her grades and hard work in the classroom, however wrestling still holds a special place in her heart. 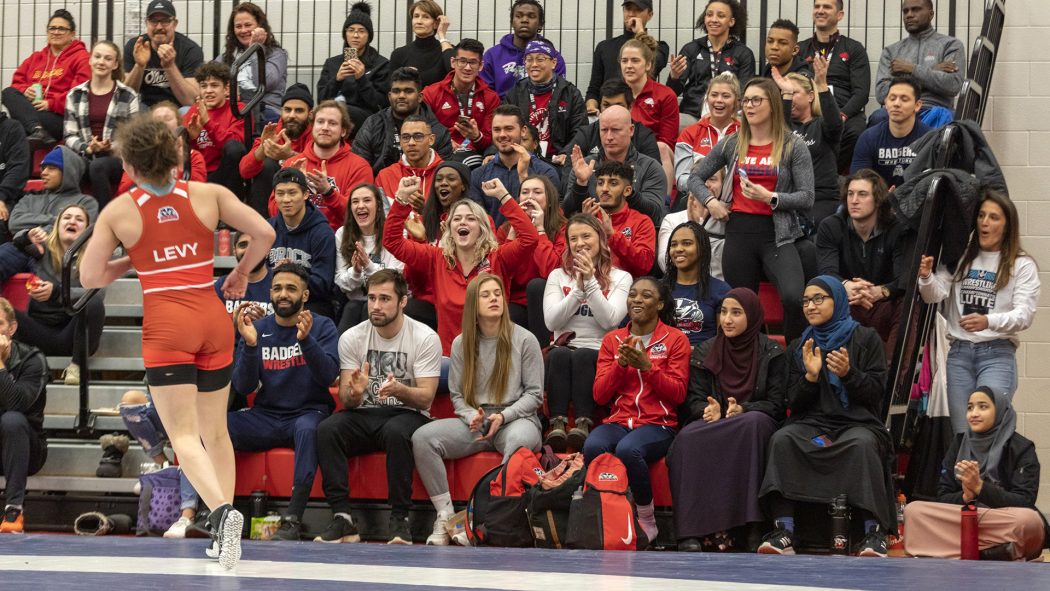 Julie Steffler conducts a victory lap in front of friends and teammates following her gold-medal win during the U SPORTS Wrestling Championships. She wore teammate Makayla Levy’s singlet due to a delay in her order arriving on time.

Among all the wins and losses, gold medals and defeats, Steffler’s wrestling career was peppered with injuries. Most notably, she’s torn the same ACL twice, which is a ligament responsible for the rotational stability of the knee. One of those ACL tears caused her to miss an entire season.

“To be able to come back from two major surgeries and win a U SPORTS title on home turf is something I’m extremely proud of,” said Steffler. “Wrestling has made me into the woman I am today. I have no idea where I would be without it.”

Steffler credits her strength and courage to the example her dad set for her growing up. She jokingly refers to not giving up on wrestling, despite two knee surgeries, due to being stubborn — another trait she gets from her dad.

In Grade 5, Steffler started wrestling for a club in her hometown of Tottenham where her dad, Bruce, served as a coach. She ended up attending a practice by chance after tagging along with her dad and brother, Erik, and was instantly enthralled with the sport.

“The other kids played games to warm up, so I joined in and sat mesmerized watching the rest of practice,” she said. “As we were leaving, I looked at my dad in the car and asked ‘Hey dad, why can’t I wrestle?’ He looked at me confused and replied ‘I never said you couldn’t. I just didn’t think you’d want to.’ I joined practice the next week.” 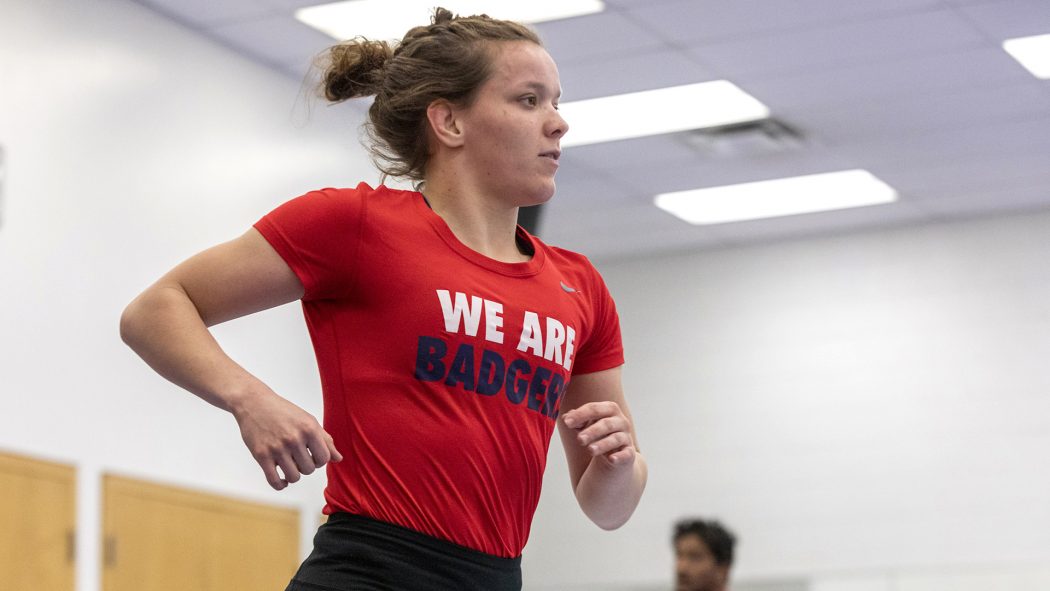 Julie Steffler, a native of Tottenham, Ont, has overcome two ACL surgeries, including one which caused her to miss an entire season.

That hometown club eventually dissolved, and she joined Kempenfelt Bay Wrestling Club in Barrie with coach Nick Cryer during her years at Banting Memorial High School. That was six years ago, but the two still stay in touch and Cryer provides tips on all of her opponents. Steffler said he’s someone who has always been in her corner, on and off the mat.

“The most valuable lesson he ever taught me as a person was that you should always shake someone’s hand. It will earn you more respect than any amount of money ever will,” said Steffler. “Shaking hands is ingrained into our sport in the way we engage and end a match. It starts and ends with a handshake. It’s a sign of respect to each other, because you both had the courage to step onto the same mat and fought to win.”