Brock Cyclones raise more than $27,000 for local fight against cancer 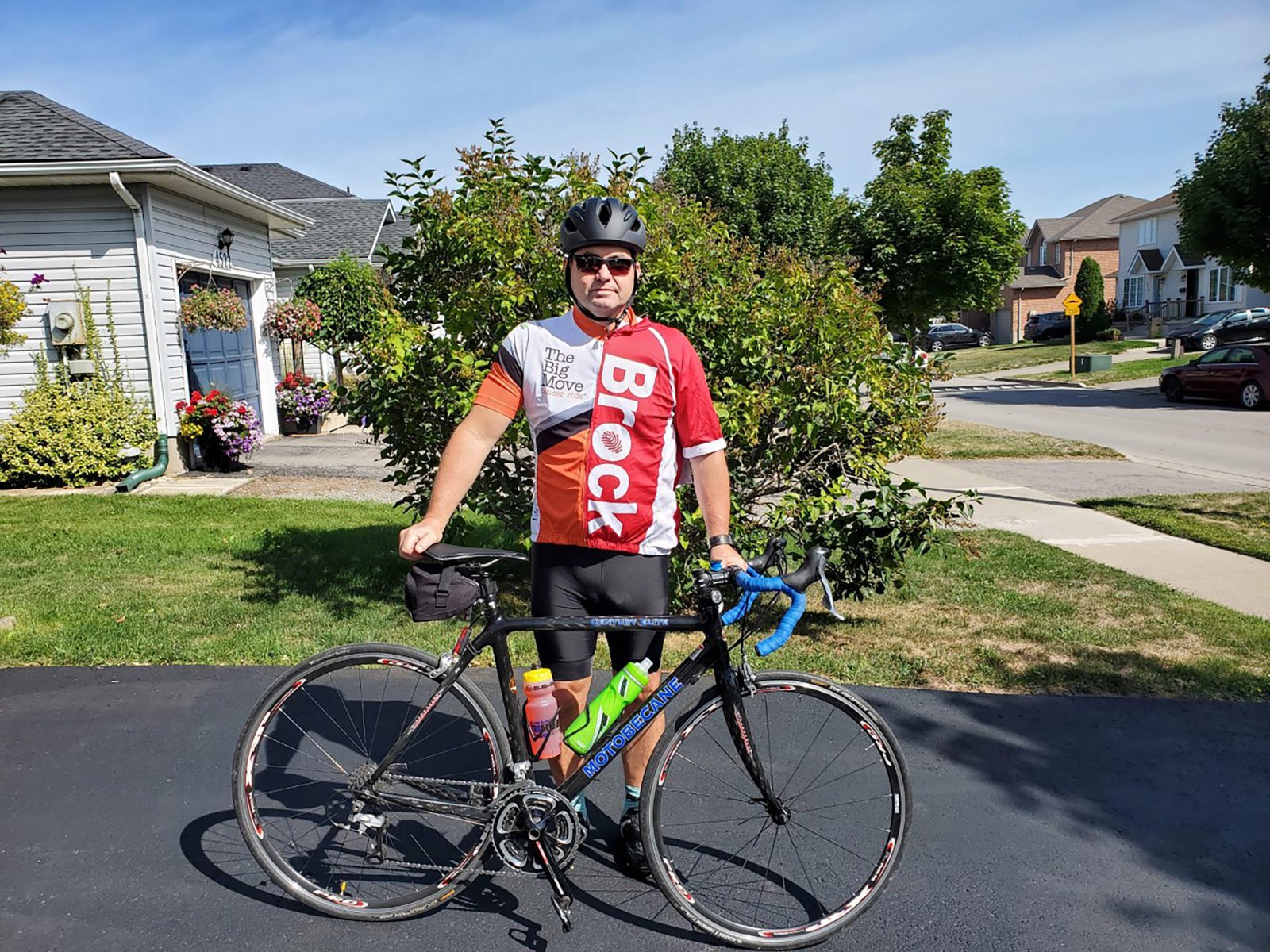 Karl Thorp, Operations Supervisor/Instructor, Campus Security Services and Brock Cyclones team captian, gets ready to take on his solo bike ride as a part of the Big Move Cancer Ride.

Sixteen members of the Brock University community laced up their shoes and hopped on their bikes this month to help support the local fight against cancer.

The Brock Cyclones, a group of Brock faculty, staff and students, ride annually in the Big Move Cancer Ride to raise funds in support of the Walker Family Cancer Centre in Niagara. Over the past 10 years, the Cyclones have raised more than $100,000 through the annual bike rides.

This year, the ride looked a little different. As with the majority of events scheduled this year during the COVID-19 pandemic, the Big Move Cancer ride had to modify their regular format to align with public health regulations. This change of plans didn’t slow down the 38 teams signed up. Adjusting to the change, the 334 participants prepared to cycle individually instead of gathering together for one big ride.

Spanning from Sept. 1 to 13, each participant rode solo at their own pace, on their own route and covered distances between 12 kilometres to more than 75 kilometres. Each rider tracked their own distance and shared their experience through social media posts and photos with the Niagara Health Foundation.

“Everyone either knows someone who has passed, is battling or has survived a diagnosis of cancer in some form,” said Karl Thorp, Operations Supervisor/Instructor, Campus Security Services. “We know the importance of family and friends support during the frequent treatments, and the Walker Family Cancer Centre enables those receiving treatment to do so close to home with cutting edge equipment and technology. It is an honour to be the team captain for the Cyclones. We have an amazing group of team members and are always looking for more.”

Brock’s team cycled more than 800 kilometre in total. Tim Kenyon, Vice-President, Research, alone cycled a total of 308 kilometres in memory of his aunt.

“The option to build your own route this year gave me the idea of a ride that would put the “big” in ‘Big Move,’” said Kenyon. “In just over 11 hours of moving time, I rode from Pelham up to Paris, Delhi and Turkey Point, circling back through Port Dover, Dunnville and Wellandport. This special challenge commemorated a special woman — my dad’s younger sister — who was lost to cancer far too young. I’m grateful to the Brock Cyclones’ donors who made all our rides so meaningful through their generosity.”

This year’s team collectively raised $27,180, which awarded the Cyclones second place for overall team fundraising. The top 20 individual fundraisers were also highlighted, with three of the Brock Cyclones being recognized for their hard work fundraising by placing in the top 20.

Out of the 334 participants, John Suk, long-time Cyclone and former Brock University Board of Trustees Chair, came in second place overall by raising $12,205. Sitting in seventh place was Gary Comerford, Brock University Board of Trustees Chair, with a fundraising total of $4,875. Rounding out the top 20 in 18th place was Ron Matsushita, former Brock instructor, raising a total of $2,250.

Any members of the Brock community who are interested in joining the Cyclones in the 2021 Big Move ride can email Thorp at kthorp@brocku.ca for more information.