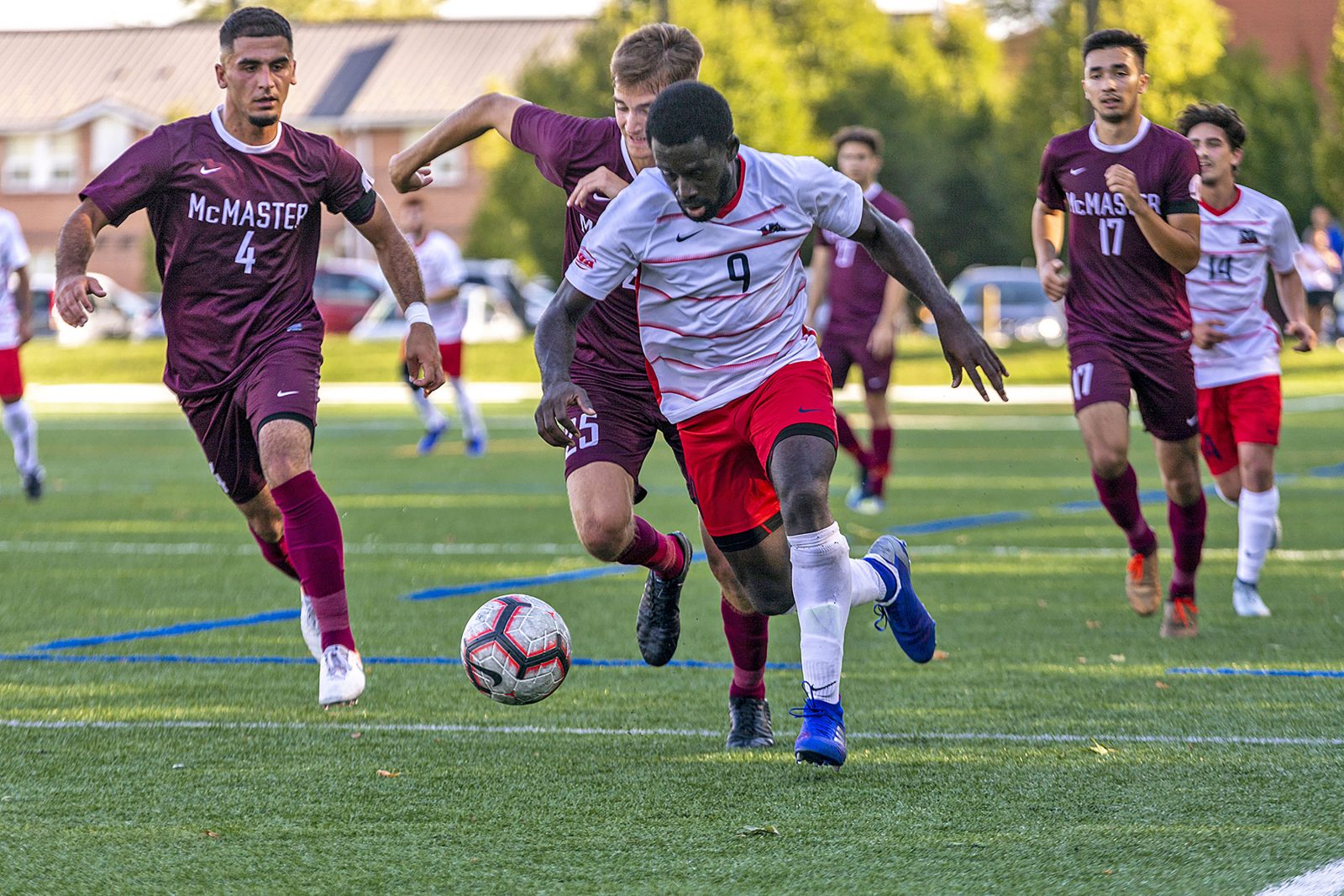 “I didn’t always respect the need to balance academics and soccer at the time,” he said.

Agyemang was enjoying a standout soccer career at the University of Guelph for three seasons (2012-15) with countless goals and loads of awards, yet he believed if he focused everything on soccer, he could become great.

He sacrificed his studies and poured all of his time into the sport he loves.

“I ended up losing everything and had to take a step back, think about what I wanted in life and how to make it work,” he said. “So, coming to Brock to complete my Psychology degree felt like my redemption.”

On Friday, June 19, Agyemang’s hard work paid off as he was one of 3,000 students who celebrated their graduation during Brock’s first-ever Virtual Spring Convocation.

“Graduating here at Brock is very special for me, and it’ll always be in my heart,” he said.

When Agyemang arrived at Brock, he was more balanced than ever. And with two years of athletic eligibility remaining, he felt the time was right to return to the pitch.

He led Ontario University Athletics with 16 goals in final season at Guelph during the 2014-15 season, yet showed little rust when he made his debut as a forward for the Brock men’s soccer team three seasons later.

“I was more focused in school and it was humbling coming back to the OUA — older, wiser and with something to prove on and off the field,” Agyemang said. “I think I did just that by graduating and by my performances on the field.”

Badgers head coach Lucio Ianiero, who also works as a full-time high school teacher, said being a student-athlete is a difficult balance and that it can be easy to be consumed with sport, so the coaching staff puts an emphasis on academics.

“Our athletes are here to get a degree first and foremost,” said Ianiero. “Being able to play sports on top of that is a bonus. Jared did a great job being able to balance both with his renewed outlook.

“We were blessed to be able to coach him and wish him nothing but the best in his future endeavours. We know he will be successful in anything he applies himself to.”

In his final OUA campaign, Agyemang was unstoppable.

By the end of September, he led the country in scoring and was named the U SPORTS Male Athlete of the Month.

Agyemang and the Badgers took the league by surprise this year and reached the second round of the playoffs after missing the post-season in 2018.

The 5-foot-9 striker was named an OUA First Team All-Star by season’s end. Agyemang led the league in scoring for much of October and finishing second overall with 13 goals in 14 games.

He was named the Badgers’ Most Valuable Player for two consecutive years.

The individual awards used to be everything for Agyemang, but it was during his time at Brock that he learned the value of being a teammate.

“There was a time where winning awards was just about me. Making sure I was the best,” he said. “My coaches here at Brock had a big influence on my game, especially Lucio Ianiero. Watching and learning from him inspired me to be a better man not just for myself, but for others. He taught me how to be a ‘deadly striker’ for the team, which always came first.”

Agyemang first started playing soccer when he was five years old after a family friend from their church recommended his parents register him and his older brother, Enoch.

“From then on, I practised and played a lot with my brother and my dad and it was just something I instantly fell in love with,” he said.

Agyemang led his high school, the St. Edmund Campion Bears, on multiple trips to the Ontario Federation of School Athletic Associations boys soccer championships, including back-to-back titles in 2011 and 2012.

He credits his dad, Opoku, for teaching him the nuances of the sport and his mother, Gifty, for showing him that hard work and dedication yields nothing but results.

With degree in hand, Agyemang is looking to become an employment counsellor and directly help others in their career development before eventually transitioning to the school board as a guidance counsellor all while staying in the game of soccer as a coach.