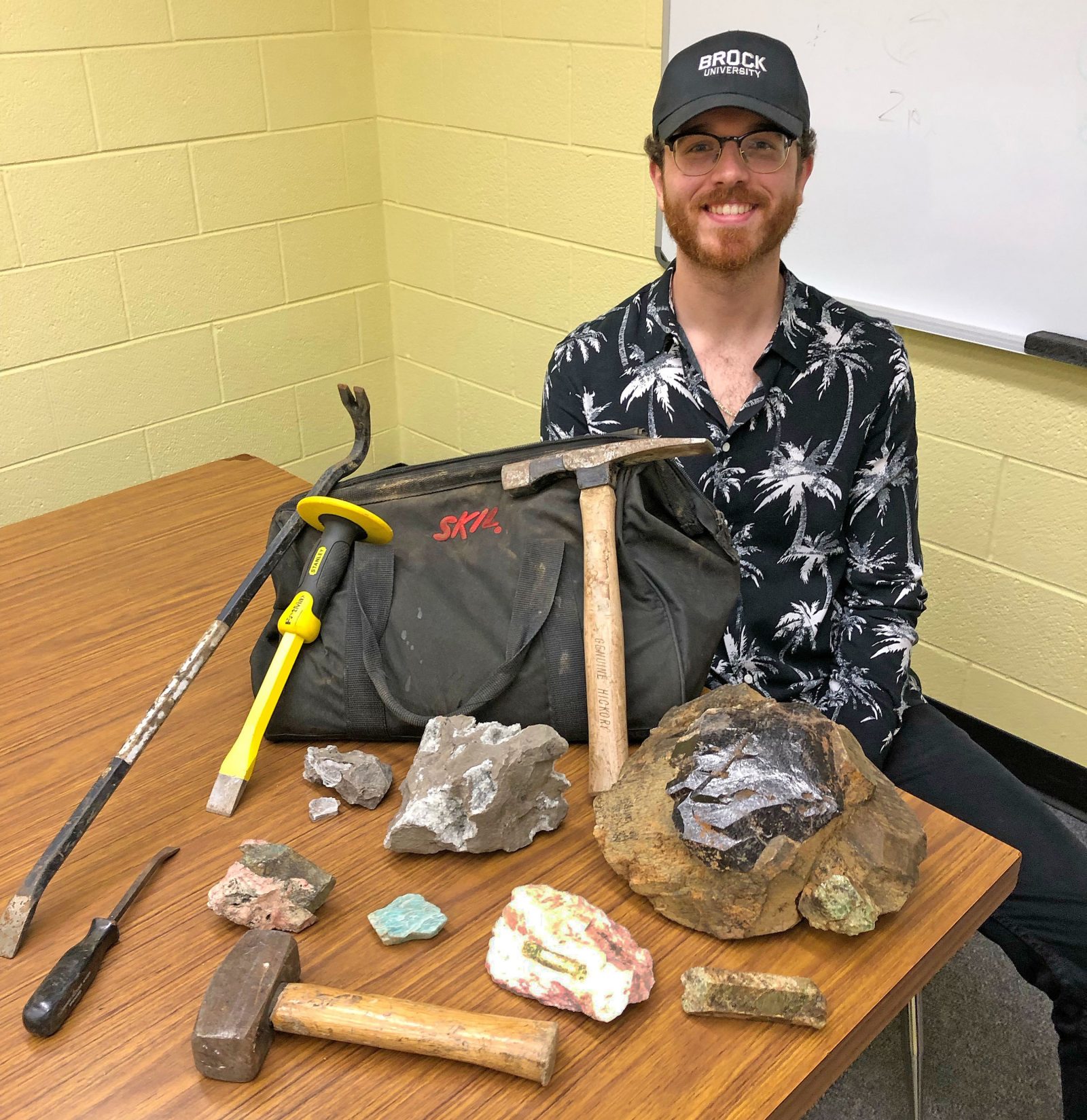 Earth Sciences student Thomas Henley shows off some of the tools and rewards of the rockhounding hobby.

Whether hiding in plain sight on county roadsides or buried in remote northern quarries, Ontario has a plethora of rocks and minerals waiting to be discovered by hobbyists known as rockhounds.

The Faculty of Mathematics and Science is home to many rockhounds, particularly in the Earth Science department, where students use the hobby to study geological phenomena and chart Earth’s history through the stories layered within the sediment.

Getting involved with rockhounding is easy at Brock, says Stephanie Chadder, President of Geoclub, the University’s longest-running club.

“We accept members from all Faculties. Anyone with an appreciation of nature and a good attitude is welcome to join us,” she says, adding that members enjoy a yearly camping trip and often pick up skills in botany, hydrology, and of course, rockhounding.

Some students have even turned their passion for rockhounding into a professional career in Exploratory Geology, which can lead to jobs in the mining industry.

Rockhounding involves a love of Geology and adventure, with participants often hiking deep into the bush for a shot at a rare find. This type of endeavour often leads them to places like Titanite Hill near Bancroft, Ont. in search of Spene, a rare titanium mineral.

Spene — also called titanite — is most often green, yellow or black, yet in rare cases, it can also be pink, red or orange. The most desirable spene samples have well-defined crystalized structures and transparency. Titanite is also industrially important as a source of titanium dioxide (TiO2), which is used in pigments.

Thomas Henley, an honours student and research assistant for Professor Mariek Schmidt in the Earth Sciences Department, enjoys hunting for spene and is a champion of the rockhound hobby.

“It’s not about the money, it’s the thrill of discovery,” said Henley.

Even though he has uncovered a large sample worth thousands of dollars, Henley enjoys the hobby for other reasons.

“You can attend a gem show and buy a nice specimen, but it’s the times you’ve spent hours digging through rubble along the roadside to find that small yet perfect specimen that make the hobby so rewarding,” he said.

To savour those moments further, Henley noted that he keeps a collection of his favourite finds on his desk, each one telling a story of discovery. The secrets of earth science linger in each rock.

A beginner rockhound often starts by learning about vugs, which are vacant spaces within rock that accumulate water over time and are saturated with ions and minerals, leading to crystals coating the interior walls. A novice might ignore the bland beige outer layer of such a geode, yet a savvy rockhound knows that the stone’s unusually light weight could mean its hollow pocket is filled with a brilliant crystalline bounty.

For those looking for something different, rockhounding offers an alternative avenue of exploration, where every step along the path is a chance to find something remarkable.