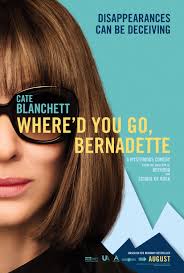 If you’ve ever found yourself wishing you could run away to Antarctica and leave your troubles behind, Where’d You Go, Bernadette, screening Thursday at 7 p.m. at BUFS, might be for you.

Bernadette Fox (Cate Blanchette, Ocean’s Eight, Blue Jasmine) lives in Seattle with her software engineer husband and teenaged daughter, Bee. Before she devoted her life to her family, she was devoted to her work as one of the most promising architects of her generation.

Now, she rarely leaves the house. When she disappears out the bathroom window one day, it’s up to Bee to figure out where her mother has gone, and why.

Based on the best-selling novel by Maria Semple, the film is directed by Richard Linklater (Dazed and Confused, Boyhood) and features Billy Crudup, Kristen Wiig and Laurence Fishburne.

“Bernadette can be acerbic, tender, charming and maddening, sometimes all at once, and it’s both funny and painful to watch Blanchett strip away the character’s psychological defenses, layer by fragile layer,” says Justin Chang of NPR.