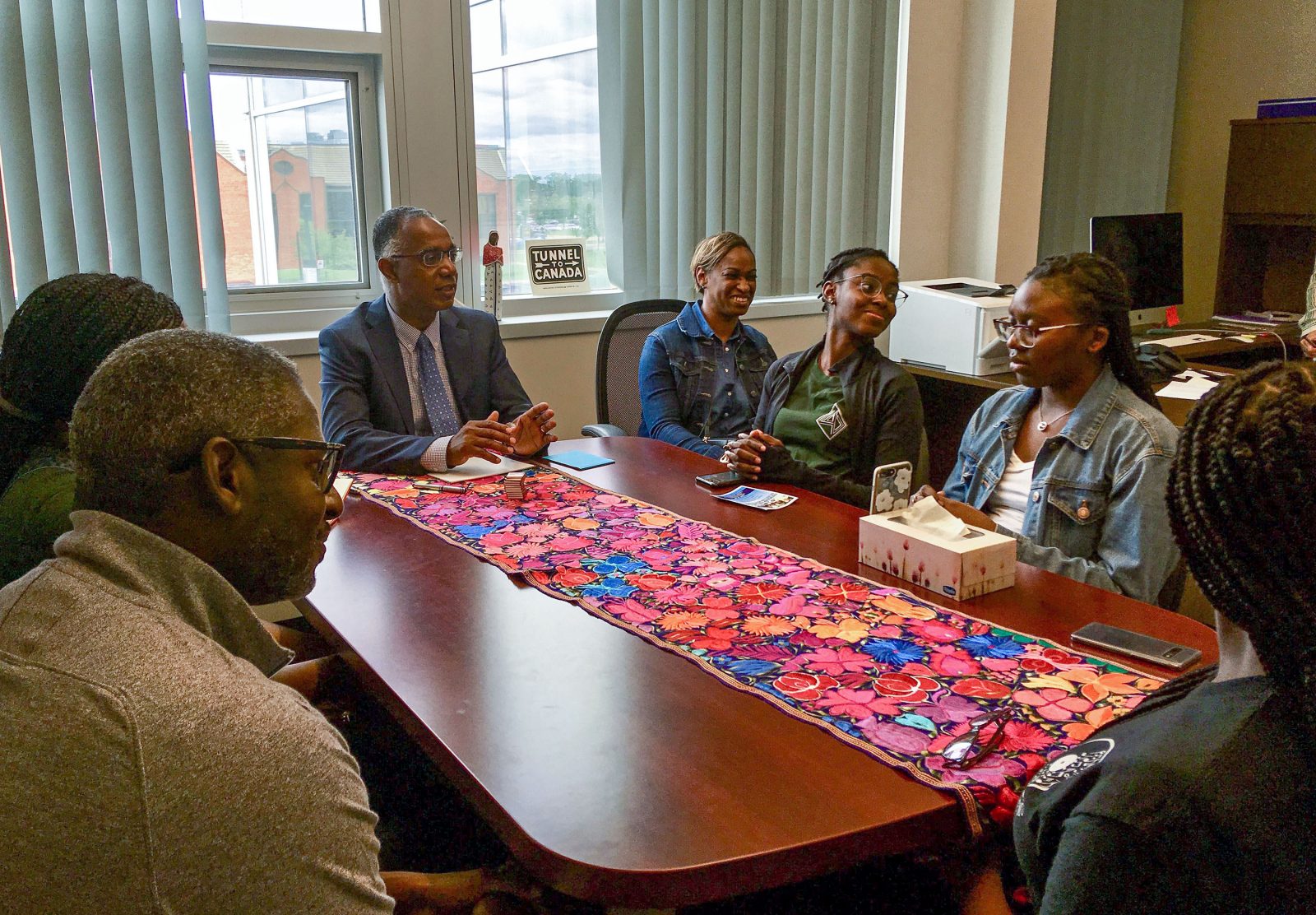 President Gervan Fearon meets with international students from the Caribbean to discuss how the University can support those affected by Hurricane Dorian.

The changing of seasons and beginning of the school year often fills the Brock community with a sense of revival and hope, but for 11 students from the Bahamas, as well as others from surrounding Caribbean countries, the need for hope has never felt so strong.

Brock President Gervan Fearon met with some of these students on Wednesday, Sept. 4 to discuss how the University can help support the Caribbean community affected by Hurricane Dorian.

Seven students — including one who joined on FaceTime — and two parents of Brock students attended the meeting. Several of them haven’t yet heard from family members in their home countries.

The Category 5 hurricane first struck the northern Bahamas on Sunday before sweeping across the Abaco Islands and Grand Bahama Island, likely destroying more than 10,000 homes and much of the country’s infrastructure, with winds reaching 295 km/h.

Less than a week ago, first-year Psychology student Jodie Sears moved from Nassau, Bahamas to St. Catharines with the help of her parents. Wednesday marked her first day of classes.

“This is my first time away from home,” said Sears. “This is the worst hurricane the Bahamas has had in my lifetime. This is historical — I’m not used to it. It’s shocking.”

She says the meeting held by Fearon helped make the small, tightknit Caribbean community on campus even closer.

“To me, Brock is a fairly big school,” said Sears. “Having the opportunity to sit down with the President of the University really showed how important this is. I wasn’t expecting that.”

Sears and her parents are still waiting to hear from relatives.

Fearon, who lived in Jamaica from the ages of six to nine before coming to Canada with his Jamaican-born parents in 1968, addressed the meeting “more as a parent than as a president.”

“We all have multiple identities,” said Fearon. “I was a father before I was a university president. I don’t lose that sense of being a parent.”

“I share a horrific sense of what’s happened, but it’s also important in the midst of challenges to recognize the resiliency of individuals. Your actions and success here, and your academic career and the things you’re doing, allows everyone weathering through the consequences to know others are pursuing their dreams. Your achievements are creating a sense of hope,” he said.

Rhonda Rolle, whose daughter is entering her fourth year at Brock, said the meeting provided her and her husband with a sense of comfort.

“As a parent, I want to say thank you,” Rolle said to Fearon. “I know it’s a small community that you have here, and just knowing that you actually reached out to them says a lot to us.”

Sears encourages the Brock community to be educated about what’s happening in her home country.

“All you have to do is type Hurricane Dorian or Bahamas into Google,” she said. “A lot of people don’t understand that we’re more than a tourist destination — people live there. These are our lives.”

Students affected by the hurricane are encouraged to connect with Student Wellness and Accessibility Services, and faculty members are asked to be mindful that students may need to excuse themselves from the classroom.

Anyone interested in making a donation to support those affected by Hurricane Dorian should visit the official Island of the Bahamas Hurricane Relief website at bahamas.com/relief