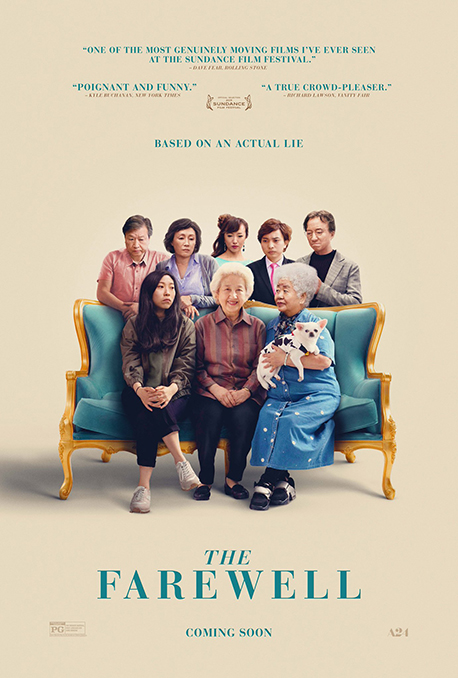 Death, deception and family dynamics form the unlikely backbone of a heart-warming story about culture and connection.

The Brock University Film Society (BUFS) season opener, The Farewell, screens at the FirstOntario Performing Arts Centre Film House in downtown St. Catharines on Thursday, Sept. 19. Supported by the Department of Communication, Popular Culture and Film in the Faculty of Social Sciences at Brock, BUFS has been bringing the best in independent and art house cinema to St. Catharines and the Niagara region for more than 40 years.

The Farewell is a bittersweet comedy-drama from American writer/director Lulu Wang that stars actress and rapper Awkwafina (Crazy Rich Asians, Ocean’s 8). Much of the film is in Mandarin with English subtitles.

When they discover that their Chinese matriarch has only months to live, most members of a family agree to hide the diagnosis from her, using the excuse of a family wedding as their chance to say goodbye. But her American-raised granddaughter (Awkwafina) struggles with the deception and threatens to reveal the truth to her beloved Nai Nai (Mandarin for paternal grandmother). The ensuing conflict pits modern against traditional, new against old.

The story at the core of The Farewell was originally shared in a segment for WBEZ Chicago’s highly acclaimed This American Life. “What You Don’t Know,” tells the story of how her own family pulled off an elaborate plot to keep one member in the dark.

Anthony Kinik, Assistant Professor in Communication, Popular Culture and Film, explains the transition from radio documentary to film allowed Wang “to introduce many new subtle, yet powerful observations to the mix through her cinematography and editing.”

The Farewell won the Audience Award at the 2019 Sundance London film festival.

The BUFS screenings take place most Thursday nights at 7 p.m. throughout the school year with some featuring introductions, short presentations and prizes.

Visit the BUFS website for a full list of this season’s selections. The full calendar of films coming to the FirstOntario PAC over the next few months is posted on the Film House website. A red B indicates a BUFS-hosted screening.