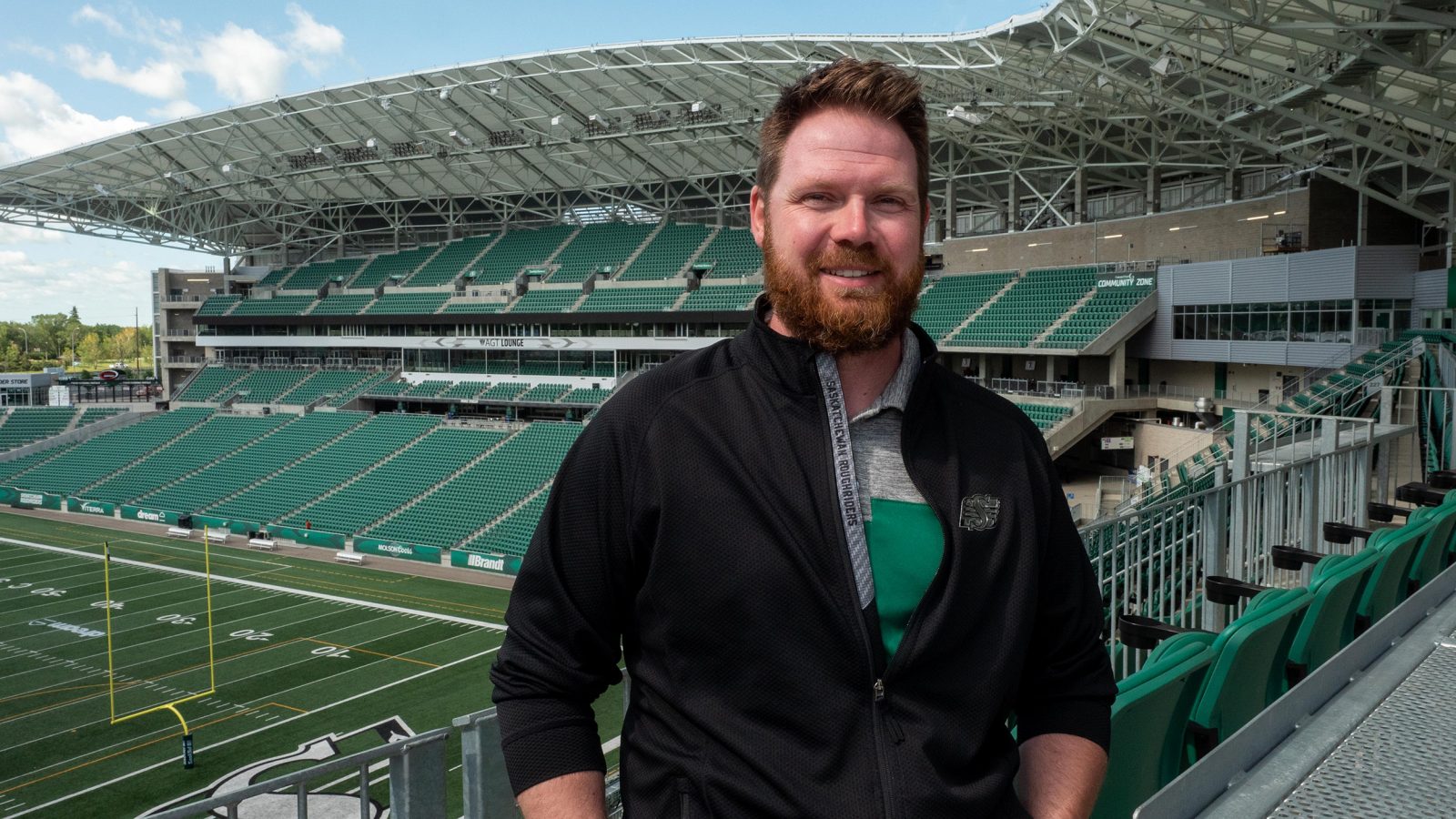 Brock University alumnus Mike Edwards (BSM ’05) has only lived in Regina for two months, but he already knows that celebrating the Roughriders in Saskatchewan is as important to the province’s football fans as being Canadian.

“For Canada Day, the Roughriders celebrated our nation’s birthday with 30,000 cheering fans in a sea of just as much green as red,” Edwards said. “Being able to kick off being a part of Canada’s national premier sporting event on this day, really I couldn’t ask for a better place to do it in than in the heart of CFL country.”

On Monday, July 15, the Saskatchewan Roughriders announced that Sport Management alumnus Edwards had been named Executive Director of the 2020 Grey Cup Committee.

In this role, the Barrie native will be responsible for leading staff support of both the Grey Cup 2020 Volunteer Festival Committee, which hosts five days of family-friendly cultural, sport and interactive activities, as well as the Operations Committee responsible for overseeing and executing the 108th Grey Cup game day.

“Solidifying our leadership group is a positive step forward in our planning for the Grey Cup,” said Roughriders president-CEO Craig Reynolds. “With the personnel we have in place, alongside world-class facilities, a hardworking group of volunteers and the best fan base in the CFL, we know we have the winning combination to make the 108th Grey Cup a tremendous success.”

“I’m what is known in the sport industry as a games gypsy,” Edwards said. “This means I move from one event to another. The CFL and Grey Cup have always been on my bucket list and I have been very strategic about the positions I have taken within the industry to prepare me for this leadership role.”

Edwards said there are four main areas in any major event: the organizing committee, facility operators, various partners including volunteers and governments, and sponsorship.

Being new to Saskatchewan, Edwards said “Roughriders fans are everywhere in Saskatchewan and around the country. In the past two months, I have felt so welcomed here by the Riders club. In fact, it reminds me of the sense of community I felt at Brock.”

He credits a friend from high school, who was already enrolled in the Sport Management program at Brock, for encouraging him to visit the campus and sit in on a first-year class. As a result, his career direction began to take shape.

“After that first lecture, that was it for me. I didn’t want to do anything else. I’m proud to be a Brock alumnus because of what sport means to Canada. My experience set me up for an enjoyable life both in and out of work,” Edwards said. “My Brock professors introduced me to the business side of sport and the diverse pathways within the industry beyond the athletes on the bench and what’s happening on field.”

Reflecting on what advice he would give to future graduates, Edwards said “first and foremost, make sure you are doing what you love and enjoy what you do.”

“Never stop learning and don’t let any opportunity pass you by,” he added. “You never know what kind of growth you will experience or what doors will open from those opportunities.”

Brock University has many partnerships within the CFL that provides Sport Management students with unique learning experiences.

“We are proud of all of our alumni, many of whom who have taken on leadership and executive roles in major sport organizations,” said Department of Sport Management Acting Chair Lisa Kikulis. “On behalf of the department, we are very excited for Mike as he begins this exciting journey in leading Grey Cup 2020. Having lived and worked in Saskatchewan, I came to appreciate the importance of the Roughriders and their legion of fans.”

The Grey Cup is the single-biggest sporting day in Canada and is one of Canadian television’s largest annual sporting events.

“This event is really the second Canada Day,” Edwards said. “It’s a time when you can see fans from two differing CFL teams hugging and enjoying the festivities together as a unified nation, as opposed to being rivals.

“Saskatchewan has a reputation for hosting some of the most successful and most exciting Grey Cup events the CFL has seen,” he said. “This wouldn’t be possible without the best volunteer base in Canada. We aim to continue that legacy in 2020 by engaging existing CFL fans and making new fans of all ages.”