Business students honoured for exhibiting the spirit of Brock 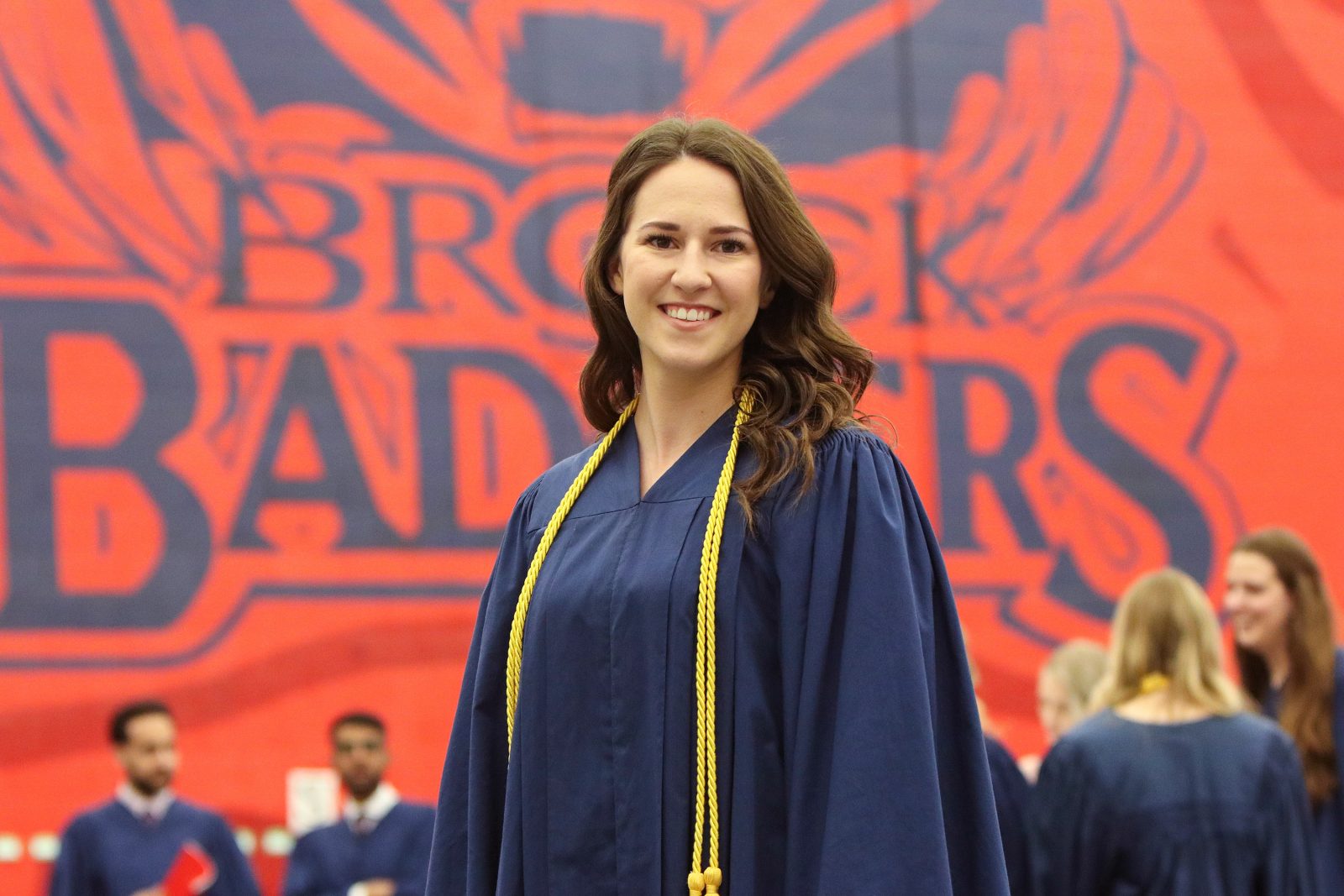 Olivia Poulin was familiar with the history and values of Maj.-Gen. Sir Isaac Brock long before she stepped foot on campus as a Goodman School of Business student.

Growing up in Niagara Falls, her first job was working as a tour bus guide sharing stories and facts about Niagara with visitors to the region. When the bus would pull into the popular Queenston Heights park, Poulin would explain the historical importance of the area and direct them to visit the Sir Isaac Brock monument.

The Bachelor of Business Administration student’s journey came full circle Thursday, June 12 as she walked across the Brock University Convocation stage to receive the Spirit of Brock undergraduate award for exhibiting the spirit of the General by demonstrating leadership, courage, innovation, inspiration and community during her time at the University.

Poulin joined Master of Business Administration grad Pradeep Kirani as this year’s Goodman recipients of the Spirit of Brock awards handed out by Brock’s Board of Trustees. 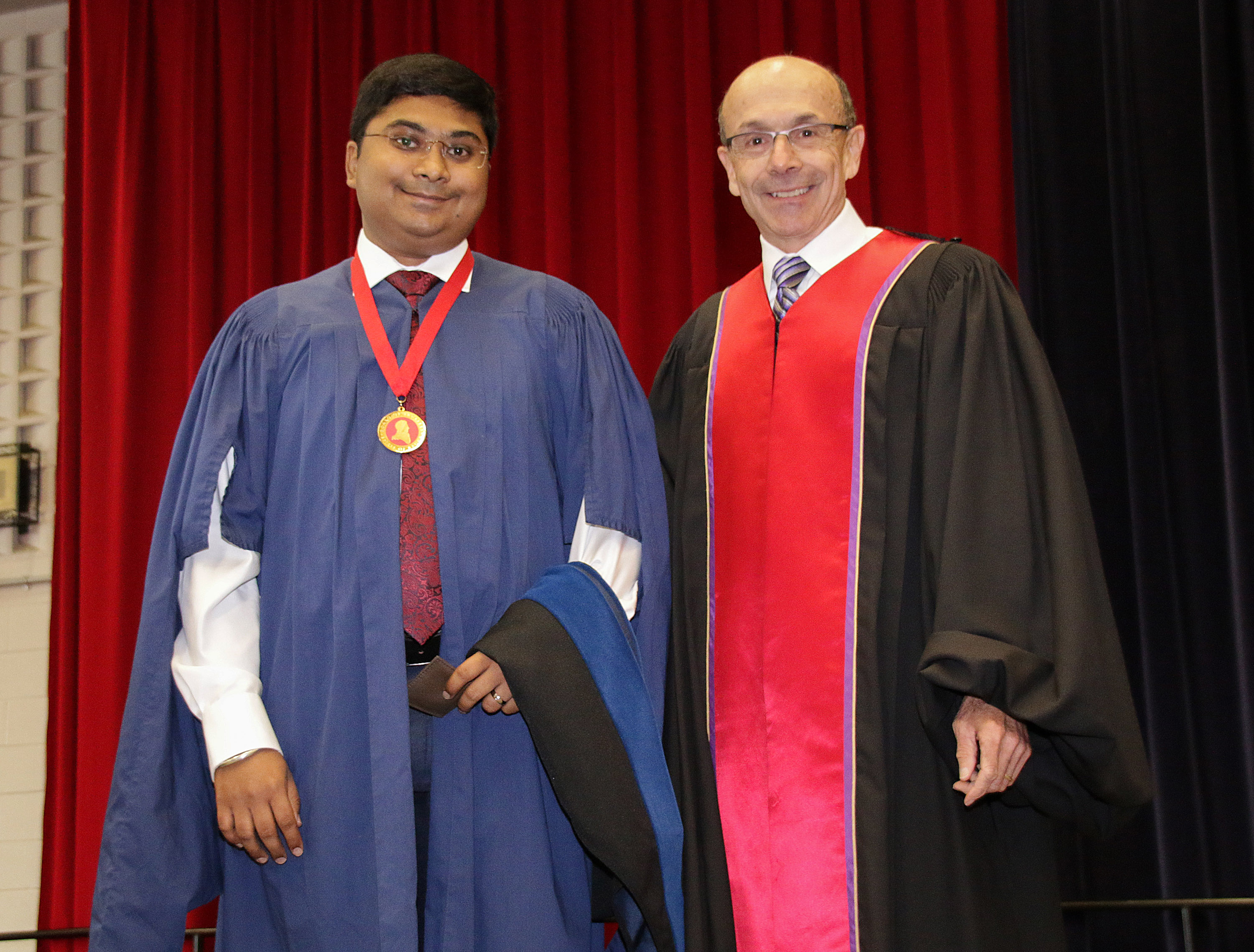 Master of Business Administration graduate Pradeep Kirani received his Spirit of Brock award from Board of Trustees representative John Fisher.

During her time at Brock she also started and grew her first company, Pupadise, to work with more than 350 clients in the Niagara community, hire Brock students and received business funding from the Deborah Rosati Entrepreneurship Award.

Poulin gained more experience outside the classroom when she was selected to shadow the PayPal Canada CEO as part of the CEOx1 Day program and went on to represent Brock on a national stage when she was selected to follow Adecco Group Canada’s CEO for one month. She was later selected as one of the Top 5 out of 204,000 applicants from 47 countries around the world for Adecco’s Global CEO for one month program.

“All those things are just the resume bullet point results of everything I became as a person and what I learned from each of those experiences,” Poulin said. “They’re awards and titles that become less relevant as time goes by, but the character I built and the skills I developed are what will stay forever.”

Later in her Brock career, Poulin mentored and inspired students as a keynote speaker at the DECA Business Conference, a Brock Leadership and Citizen Society mentorship evening and Brock Leadership Launch event. She feels most fulfilled when she’s able to help her friends and peers realize their own potential.

“Leaders don’t pull from ahead, they push, work and encourage from behind, and I’m proud to encourage other students in my community to do big things and show them, from my example, that it can be done,” she said.

Goodman Associate Professor Eric Dolansky taught Poulin during her time at Brock and says she’s left an impact that will be remembered long after she’s gone.

“As faculty, we are occasionally lucky enough to cross paths with a student who is driven, intelligent, engaged and responsible at the level that Olivia is,” Dolansky said. “She is one of those special students who will go forth from our University and show the world what leadership, exceptionality and contribution are all about.”

“We’re proud of Olivia and Pradeep’s accomplishments to date and there’s no doubt they will generate a greater sense of pride for the School and University as they take the next steps in their careers,” he said

Like Poulin, Kirani also excelled when participating in experiential activities, was an active student leader and involved in the community during his time at Goodman.

During his one-year co-op placement, Kirani was successful in generating more than $20 million in revenue for FedEx, gaining approval from both customers and senior leaders. It was this success that earned him the 2018 Brock Graduate Co-op Student of the Year award.

Kirani was involved in the Graduate Business Council, and through his role of Vice-President of Competitions and Conferences, he worked hard to increase competition participation by graduate students and initiated competition preparation training for students.

In addition to achieving high academic standing, Kirani was active in the Niagara community, volunteering his time to support the non-profit organization Bridges for Autism. While there, he worked supporting clients and used his business expertise to help streamline their bookkeeping and application process.

To hear more about Poulin’s experience in her own words, watch this instalment of Goodman’s Who’s in the House video series: