Abundance of interesting research among grad students at Convocation 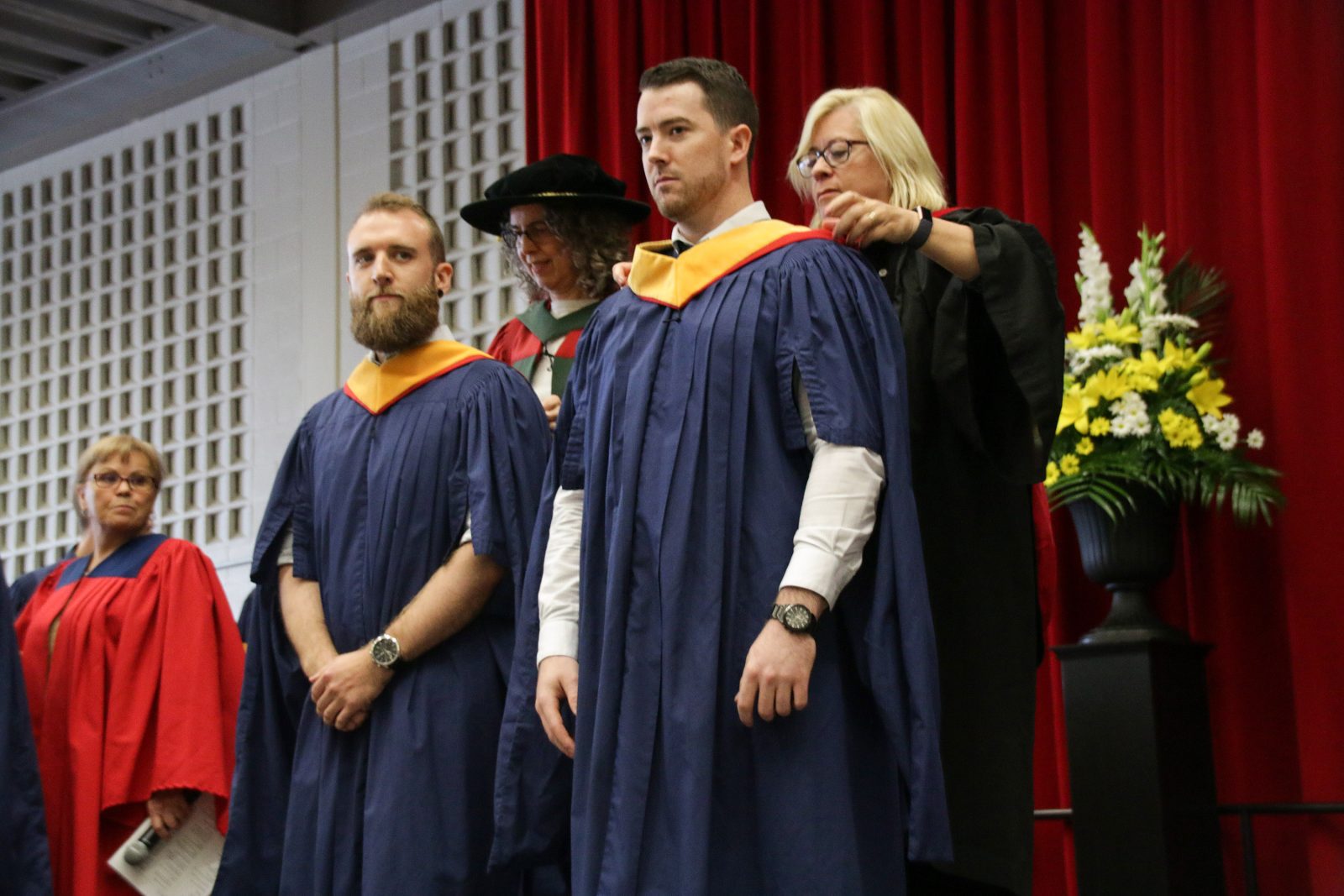 Aaron Bridge crossed the Convocation stage with confidence Monday, June 10, knowing the research he completed during his Master of Science program was the first of its kind to be published.

Bridge spent the past two years studying Greek yogurt — one of several interesting topics taken on by Brock’s graduate students set to get their degrees during Spring Convocation this week.

The research by the PhD candidates is diverse, representing topics from antiracism to positive body image and West Nile virus. Upon receiving their degrees, they are asked to partake in the unique Brock tradition of joining their colleagues on stage for the remainder of the ceremony.

For Bridge, the master’s program was an opportunity to delve into a little-explored area of interest: Greek yogurt.

While the popular breakfast food and snack is often marketed for its health and intestinal benefits, Bridge was more interested in its viability as a post-exercise supplement.

Bridge used a population of university-aged males with no previous training experience to study the effects of Greek yogurt consumption on muscular strength, muscle thickness, body composition and bone health.

“There was no research available on Greek yogurt as a post-exercise supplement, despite its nutritional value and growing popularity,” Bridge said. “The research on bone health in young adult males is very limited and I wanted to help fill that gap.”

Bridge was drawn to the master’s program after seeing Nota Klentrou, Associate Dean of Graduate Studies, present during a lecture in the final year of his undergraduate studies at Brock.

“It was kind of a light-bulb moment for me,” he said. “I was attracted to the idea that the program could be tailored to my interests. For me, that was nutrition and resistance training. The idea of spending two years researching and critically understanding a topic that I was passionate about was intriguing.”

All participants in Bridge’s study worked out three times a week for 12 weeks, doing a combination of resistance and plyometric exercises. Following exercise, one group consumed Greek yogurt and the other group consumed a placebo pudding designed to mimic the texture and consistency of yogurt. Participants also consumed their respective supplements before bed and on non-training days.

With his study completed, Bridge was happy to find his results were consistent with his hypothesis. Daily intake of Greek yogurt, along with resistive exercises, increased muscular strength and muscle thickness while improving body composition compared to the placebo group.

“The Greek yogurt increased participants’ habitual protein and calcium intake, which likely is responsible for these beneficial changes,” he said.

Bridge said he is “very pleased with how the study turned out.”

“However, as a researcher, I think the more we uncover and understand about a topic, the more we realize there is so much more to know.”

Bridge is currently working on a second paper about Greek yogurt’s ability to increase bone formation. After celebrating Convocation with family and friends, he will head back to his job as a research co-ordinator at Victoria Hospital in London, Ont.

“I’m still debating if I want to continue in academia and do a PhD, but my MSc from Brock was a great experience,” he says. “The biggest takeaway for me would have to be the personal growth and development I experienced during my time as a grad student. The ability to learn information quickly and critically and the confidence I gained is unrivaled. It definitely helped me to find a career for myself in research.”

Diane Dupont, Interim Dean of Graduate Studies, offered her congratulations to all the graduates.

Dupont also provided some words of wisdom for the graduates.

“As you finish this stage of your life, I hope you continue to embrace opportunities to acquire new knowledge. Whether you are continuing on an academic path, or transitioning to a career outside of academia, I know you will find that being a lifelong learner will bring you much satisfaction and enjoyment.”