Annie Berg: Brock’s superstar on and off the ice 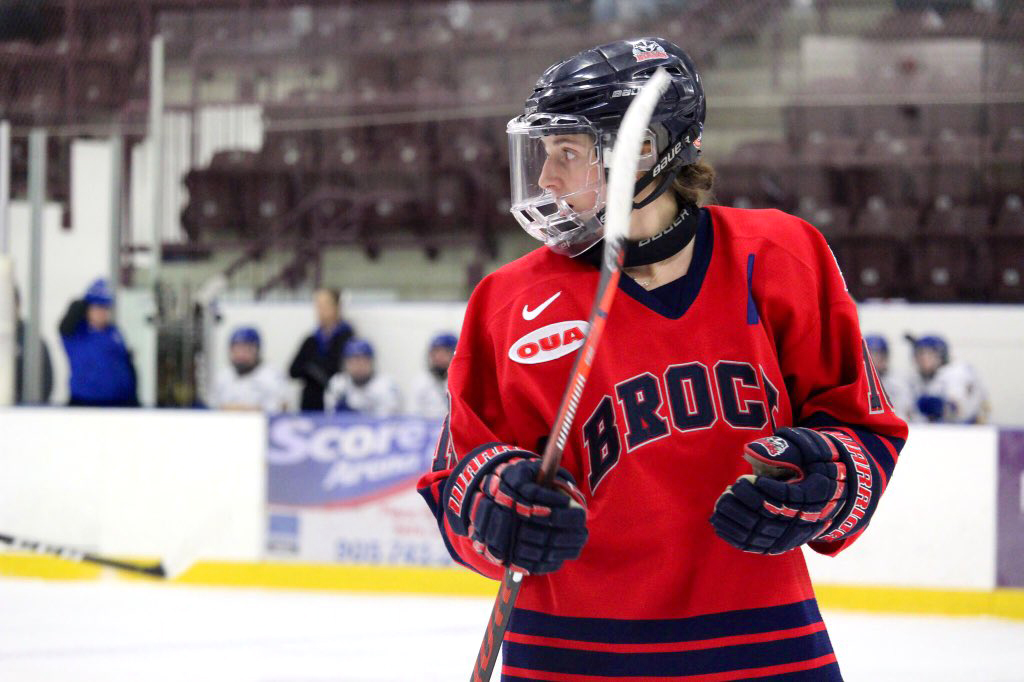 Women’s hockey coach Margot Page knew the elite hockey player they were getting when Annie Berg made the choice to attend Brock University.

Yet, it’s Berg’s character off the ice that Page has come to appreciate over the past three seasons.

“Honestly, it has nothing to do with anything on the ice. It’s how she engages in our local community,” said Page.

That’s when Berg met Brock women’s hockey Team Achieve teammate Madison Lafontaine, who has been a member of the Badgers for three seasons.

This year, Lafontaine wanted to attend a Badgers’ road game for her birthday.

“Annie took the time to make her birthday special,” said Page. “Madison sat with Annie pretty much all the way up and back from the game.”

On the bus, Berg asked Page if it was okay if she took Lafontaine to an OHL hockey game when they returned to Niagara.

“I connected Annie with Madison’s parents and they gave the green light,” said Page. “When we got back home, she took Madison to the game, fed her and got her back home. She has done many other random community things that not many people know about. I find out about some as people send me emails to say thanks.”

Page asked Berg why she does it.

The Kinesiology student is also exceptional in the classroom.

Berg is an Academic All-Canadian who is writing her Medical College Admission Test this summer in hopes of entering medical school when she completes her degree at Brock.

On the ice, Berg helped the Badgers tie Toronto for second place in the OUA with a record of 12 wins, nine losses, two ties and one overtime loss.

She enjoyed a career season where she participated in 44 per cent of Brock’s scoring. Berg finished tied for third in the province in scoring with 11 goals and 25 points in 24 games, and 10th in U SPORTS.

“The best part of coaching Annie is witnessing her intensity and compete factor,” said Page. “You can’t teach that. I love seeing her play and just always want to be the best. It is a habit for her. She wants to be the best on the ice, but also in the workout room and in the classroom. It’s fantastic to see that strive for excellence.”

“The best part of my game is definitely my speed,” said Berg. “It’s something I work so hard on because I know it gives me the separation I want on the ice.”

Sport Management student Josh Mallory started tracking analytics for the Brock women’s hockey team last season. He joined the team not knowing any of the players.

“Annie stood out pretty quickly,” said Mallory, who will serve as an Assistant Coach and Director of Analytics with the team next season. “She excels in the high-danger area of the ice. In terms of the data, a lot of it just supports what you see on the ice. She carries the puck often and her exit-to-entry ratio was almost 1:1 last season. When this happens, it illustrates that a player is effective at carrying the puck through the neutral zone with possession, but more importantly it’s a component of what makes her an effective play driver.”

In December, Berg was inducted into the St. Catharines Female Hockey Association’s Wall of Fame.

Coming out of high school, she played in the Provincial Women’s Hockey League and was bound to leave home for an Division 1 NCAA scholarship.

But Berg had a change of heart while competing for Team Canada at the IIHF Under-18 Women’s World Championships in St. Catharines in January 2016.

Instead, she chose Brock and looked forward to competing with the Badgers.

“I had a lot of thinking to do during that week,” Berg said at the time. “It was coming close to exam time and I was really focusing on school and that’s when I decided.”

“I think she was just doing some soul searching, because she just loves the Niagara region and is very serious about her academics, career and family,” said Page. “It was fantastic for us, obviously. Annie brings a whole new level of skill and intensity to our practices and games. She knows what it takes to be an elite level student-athlete. She is an excellent role model. Our players see it so they can now try to be it as well.”

Berg immediately made a splash in university hockey as she registered 11 goals and 23 points in 24 games to lead the league in rookie scoring and was named the OUA Rookie of the Year in her first season. She recorded six multi-point games in the conference and never went more than two games without registering a point that year.

Berg helped the Badgers make the playoffs for two consecutive seasons and when their most recent season came to an end in February, she donned a different shade of red in March.

Berg was named to Canada’s Winter Universiade women’s hockey team to compete at the FISU tournament in Russia.

“It was a goal of mine to make this team,” she said. “At the time they were putting the team together I was third in league scoring, so I knew this put me in the mix, but you never really know what a coach is looking for and what type of team they wanted to build.”

Berg received an email telling her she was in the Top 80 player pool which was being evaluated for the Canadian team.

“The email said in about a month the team will be named,” she said. “That’s obviously a lot of pressure and you try to take it as a push, but not a distraction. In your head you know it would suck to be that close and not make it.”

Canada’s team consisted of university student-athletes from across the country, including some of Berg’s rivals in the OUA.

“It’s actually funny because when we arrived, we all talked about each other’s teams and how hard it is to play against each other,” said Berg. “Everyone had a good laugh because you always assume these high-end players that you battle with throughout the year won’t like you, but then everyone just becomes a tight-knit group.”

In Russia, Berg learned that the role you are given is a privilege, and it’s never static.

“If you work hard you will be rewarded, and there’s always ways to move up and move down the lineup,” she said. “I learned that if I take my role on any team for granted, I won’t improve myself, or the team.

She noticed a big difference with the pace in practices.

“Everyone is pushing both themselves and others way harder in practice, because in a short-term competition there’s no time to waste. That level of compete and desire to be great held true in all off-ice activities as well.”

Canada posted a record of 5-2 and earned a silver medal at the tournament.

“Annie is one of the most internally-driven athletes I’ve worked with,” Bendus said. “There’s a reason why she was on the Canadian National Women’s U18 team before she came to Brock and has been such an impact player for us. She wants to be the best at whatever she does and doesn’t need someone else to tell her to put the work in. She’s going to do it on her own.”