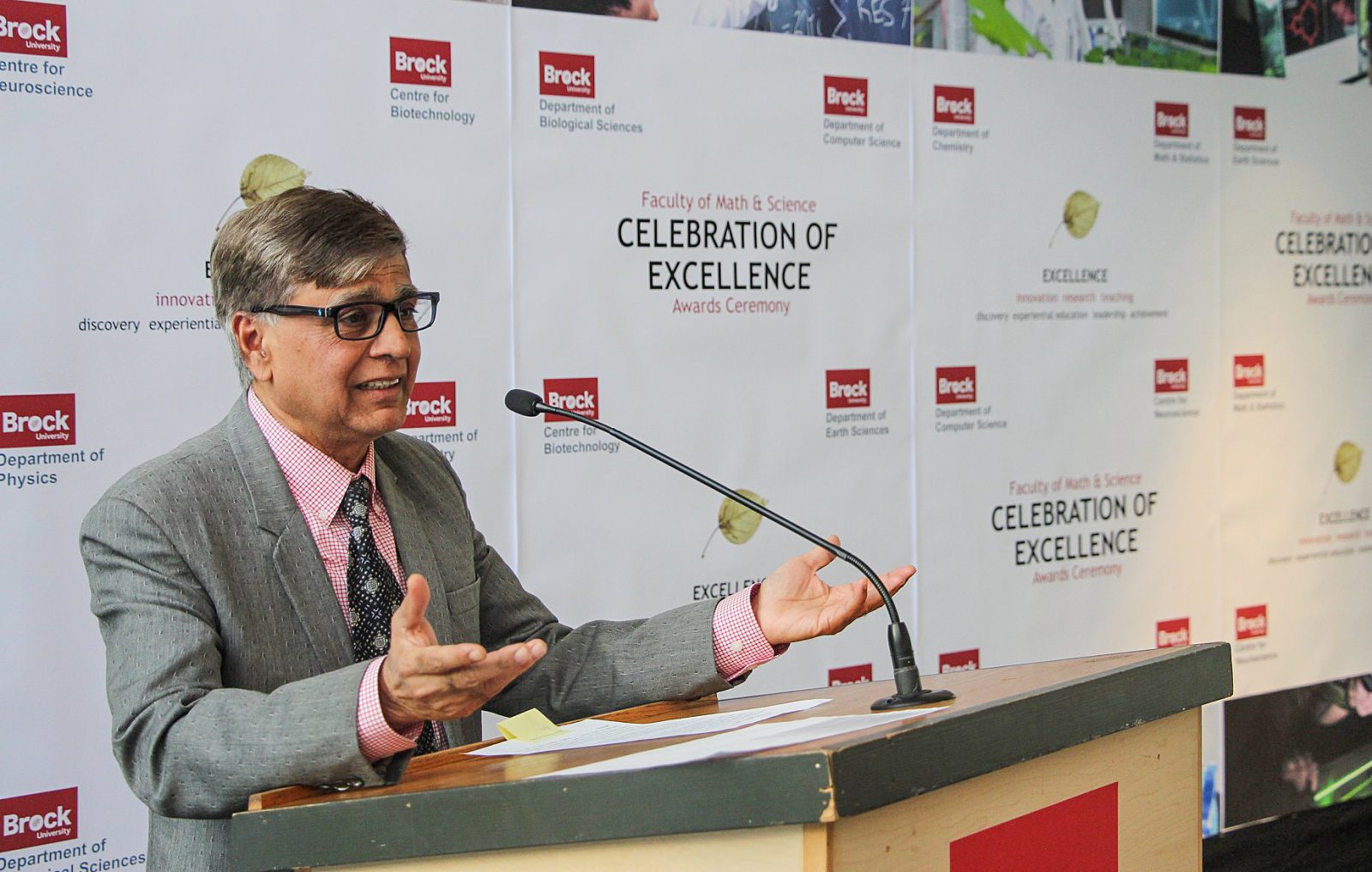 Ejaz Ahmed, Dean of the Faculty of Mathematics and Science, speaks at the Faculty’s 2019 Celebration of Excellence awards ceremony in January.

Rather than rest on his laurels after receiving international accolades earlier this year, Ejaz Ahmed wants to leverage those global relations to aid with recruitment at Brock University.

In January, the Dean of Brock’s Faculty of Mathematics and Science had an auditorium named in his honour at the University of the Punjab — the largest and oldest seat of higher learning in Pakistan. The auditorium holds up to 100 students and is used for teaching, seminars and various gatherings.

A native of Pakistan, Ahmed has close ties to the University of Punjab and regularly gives lectures to its postgraduate students and faculty members.

“The College decided to name the auditorium after Ahmed to acknowledge his services regarding the improvement of our curriculum and research facilities,” said Shahid Kamal, Principal of the College of Statistical and Actuarial Sciences, part of the university.

Ahmed also learned in January that he had been awarded a Bualang ASEAN Chair Professorship, presented to academics of all disciplines from abroad who are internationally recognized as leaders in their field. The award allows him to pursue groundbreaking research at Thammasat University, the second oldest university in Thailand.

Ahmed, whose research primarily focuses on big data, appreciates the recognition his colleagues have bestowed on him and looks to leverage these ties to help in Brock’s international recruitment.

“I am so incredibly thankful for the support I have received regarding my work,” he said. “These recent developments speak to the quality of research being done in our Faculty and I hope that this helps in bringing Brock to the forefront of students’ minds all over the world.”

A well-travelled man, Ahmed knows that pursuing an education internationally takes a lot of consideration. Now in his second term as Dean, his story at Brock is one that stems back to his days in Karachi, capital of the Sindh province of Pakistan.

After spending the entirety of his childhood there, Ahmed completed an undergraduate degree with honours and a Master of Science degree in Statistics at the University of Karachi. He was later appointed as an officer at a major bank and enrolled in an evening program at the Institute of Business and Administration.

However, he found his work was not intellectually stimulating and knew he wanted more. After much deliberation, he decided to pursue higher education. He eventually moved to Ontario and earned a Master of Science degree from the University of Guelph and a PhD from Carleton University.

“This was likely the hardest and most important decision of my life,” Ahmed said. “I would not be where I am today had I not left home.

“I’d like for students everywhere to know that while it may be tough to leave your family and friends, it is important for you to seek the best education that you possibly can, and we can provide that to you at Brock University,” he said.