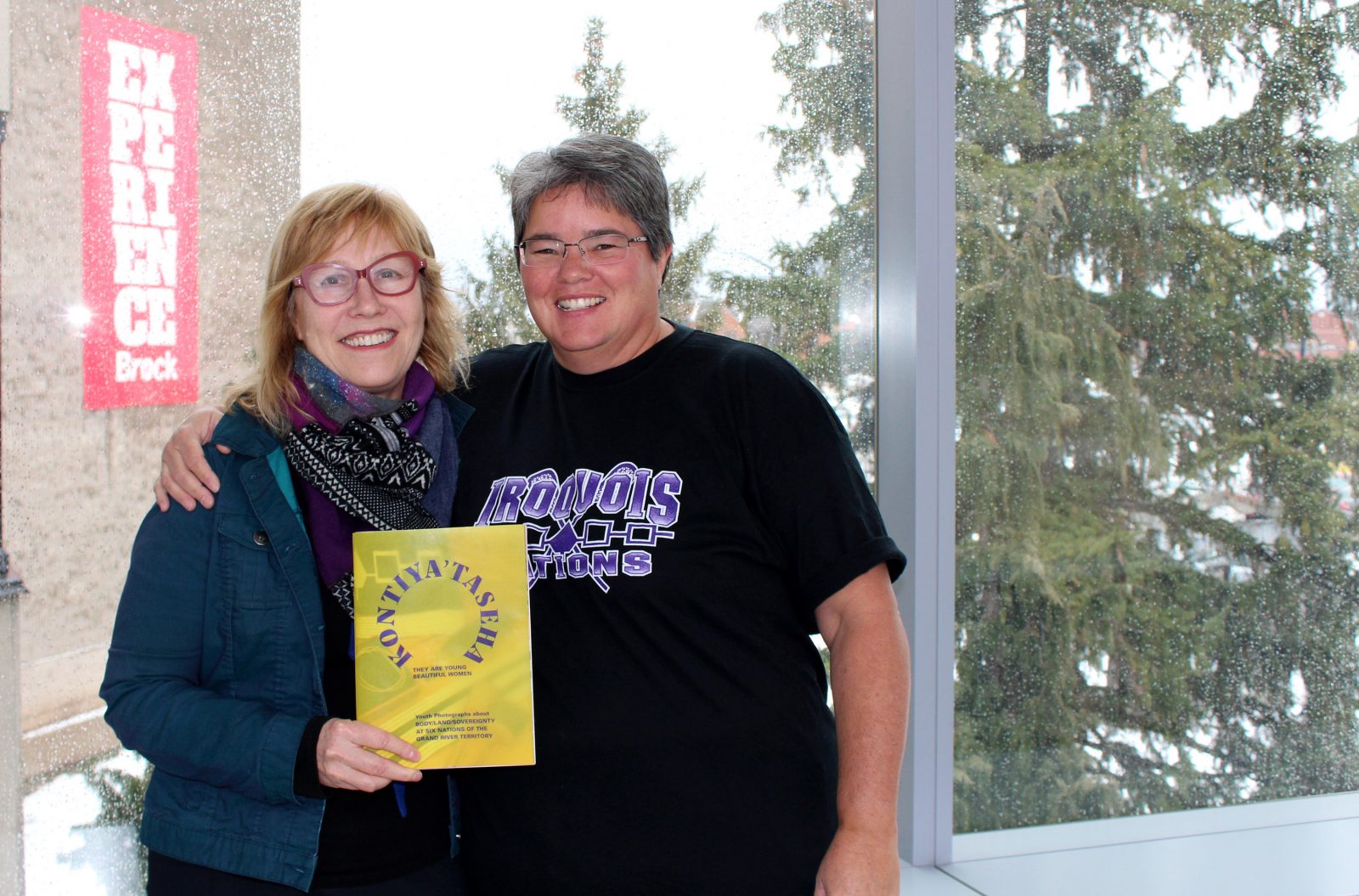 Associate Professor Margot Francis from the Centre for Women’s and Gender Studies and the Department of Sociology with Sherri Vansickle, a lecturer in the Tecumseh Centre for Aboriginal Research and Education, with a copy of the Kontiya’taseha photo catalogue.

The phrase, meaning ‘they are young, beautiful women’ in Mohawk, was chosen as the title of a book of photography produced by Indigenous youth who participated in Brock’s recent Body/Land/Sovereignty project.

The project brings together members of the University’s Faculties of Education and Social Sciences: Margot Francis, Associate Professor in the Centre for Women’s and Gender Studies (WGST) and the Department of Sociology, and Sherri Vansickle, a lecturer in the Tecumseh Centre for Aboriginal Research and Education. 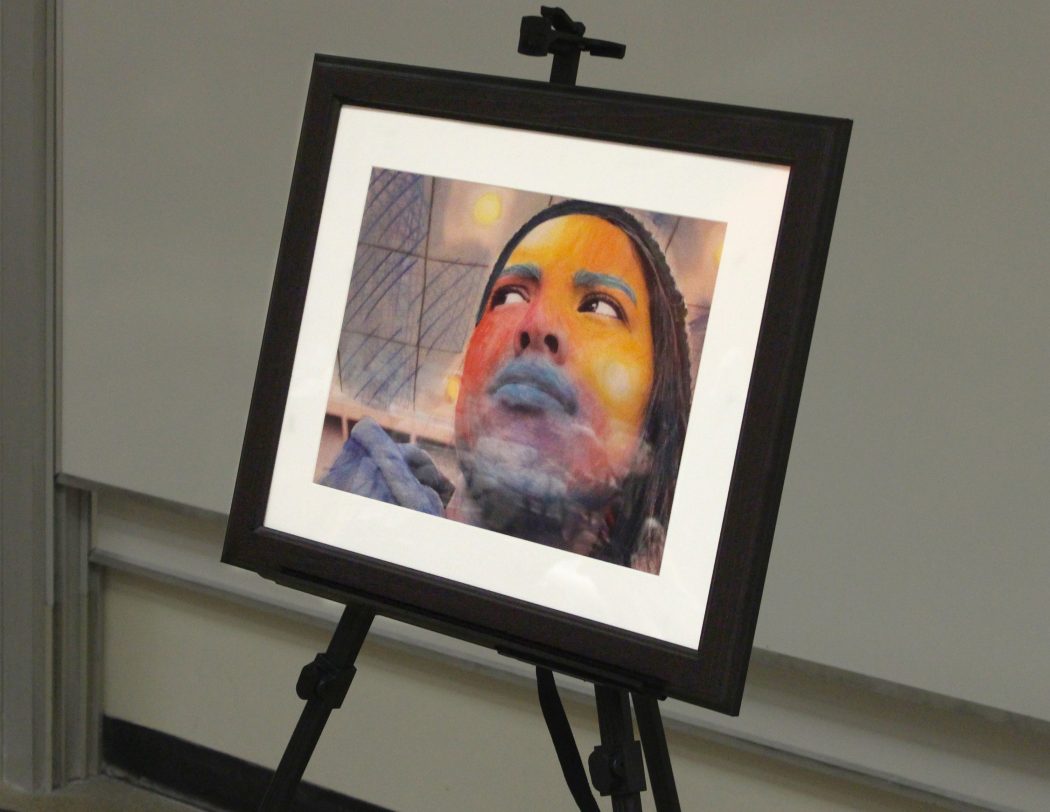 Photos by participants in last year’s Body/Land/Sovereignty project were displayed at the REDress Project event on Feb. 14.

Body/Land/Sovereignty was born out of a young Indigenous woman’s request for a photography workshop, which prompted Vansickle and Francis to respond. They first began the project in January 2018 with financial support from the Ontario Arts Council, the Six Nations Community Development Trust and the Social Justice Research Institute.

To ensure the project’s success, the pair enlisted the help of renowned Mohawk photographer Shelley Niro, whose artistic work has been recognized with a Governor General’s Award in Visual and Media Arts and the Scotiabank Photography Award.

“Shelley said she would love to work with us,” Francis recalled.

With a photography expert on board, Vansickle used her connections as a Native Education Counsellor to recruit students to participate. In addition to her role at Brock, she works in two secondary schools in the Grand Erie District School Board that serve significant Indigenous populations from the Six Nations of the Grand River Territory.

In its first year, Body/Land/Sovereignty involved students from Brantford Collegiate Institute. This year, participants are from Pauline Johnson Collegiate and Vocational School, also in Brantford.

As many of the participating students are on a bus for two to three hours a day travelling to and from school, project organizers negotiated with school officials to allow them to participate during class time.

Also an integral part of the project was WGST Assistant Professor and Indigenous scholar Robyn Bourgeois, who first met with students at their school to discuss the meaning of their involvement.

Students later came to Brock to attend the REDress Project event held in February and participate in Bourgeois’ workshop on body and land sovereignty.

“Part of the objective of the project is for participants to begin to develop a vocabulary around issues they know but don’t necessarily have language to talk about, and to present some concepts to think with,” Francis said. “I think Robyn was one of the key people to enable them to start talking about colonization, gender, LGBTQ issues and body autonomy. ”

One is now studying media arts at college. Kaysha Jamieson entered her work in a Women’s Cultural Centre competition and was chosen to have her art displayed. “Only about 30 were selected from among more than 300 artists who submitted,” Vansickle said. “And Kaysha was the youngest.”

Another participant, Sam Miller, works with the United Church of Canada on their reconciliation team. “Her growth in her ability to speak and explain the issues, grew exponentially during the time that we were together,” Vansickle said. “That was very powerful to watch.”

“What I love is that the participants had full support of the school, their community, and of their family and friends,” she said. “They had people cheering them on from everywhere.”

Photographs from last year’s participants were displayed at a recent dinner that marked the end of the project.

“When they walked into the celebration and saw their work big and framed for the first time, and on the wall, they were kind of bowled over,” Vansickle said. “It was pretty impressive.”

Francis and Vansickle acknowledge that conversations about body sovereignty and land sovereignty, and about the violations of those sovereignties, are often difficult and painful.

“One of the things this project is trying to do is to give those young women the alternate modality of photography to actually engage with those questions,” Francis said.

Niro, who grew up on the Six Nations reserve, wanted to “make space so that Indigenous women can make their own reality and don’t necessarily have to stereotype themselves as they think others want to see them.”

Vansickle and Francis are convinced that the resulting photos demonstrate that independence and strength that organizers were hoping to nurture in the participants.

“I’m not saying it gave them permission to speak, but it increased their vocabulary, increased their confidence, their courage to be able to name things the way they are — the injustices, being made to feel irrelevant — and to say that’s not OK,” Vansickle said.

The Body/Land/Sovereignty project continues this year. Vansickle says that participants “will have some Mohawk vocabulary and some artistic vocabulary, and an opportunity to come here and celebrate with their family and friends.”

Added Francis: “It’s really interesting to see what the participants produce because it’s not necessarily what we would have expected. It is their own vision. And I think we can learn from that. Both from what they say to us but also what they show us.”

Body/Land/Sovereignty is funded by the Ontario Arts Council (Indigenous Artists in Communities Projects) and the Six Nations Community Development Trust, with support from the Human Rights and Equity Office, and the Social Justice Research Institute at Brock University, the Native Advisory Committee of the Grand Erie District School Board, Indigenous Studies at McMaster University, Our Sustenance Community Garden at Six Nations, the McMaster Museum of Art, and the Art Gallery of Hamilton.