Brock community urged to combat hatred together at campus vigil 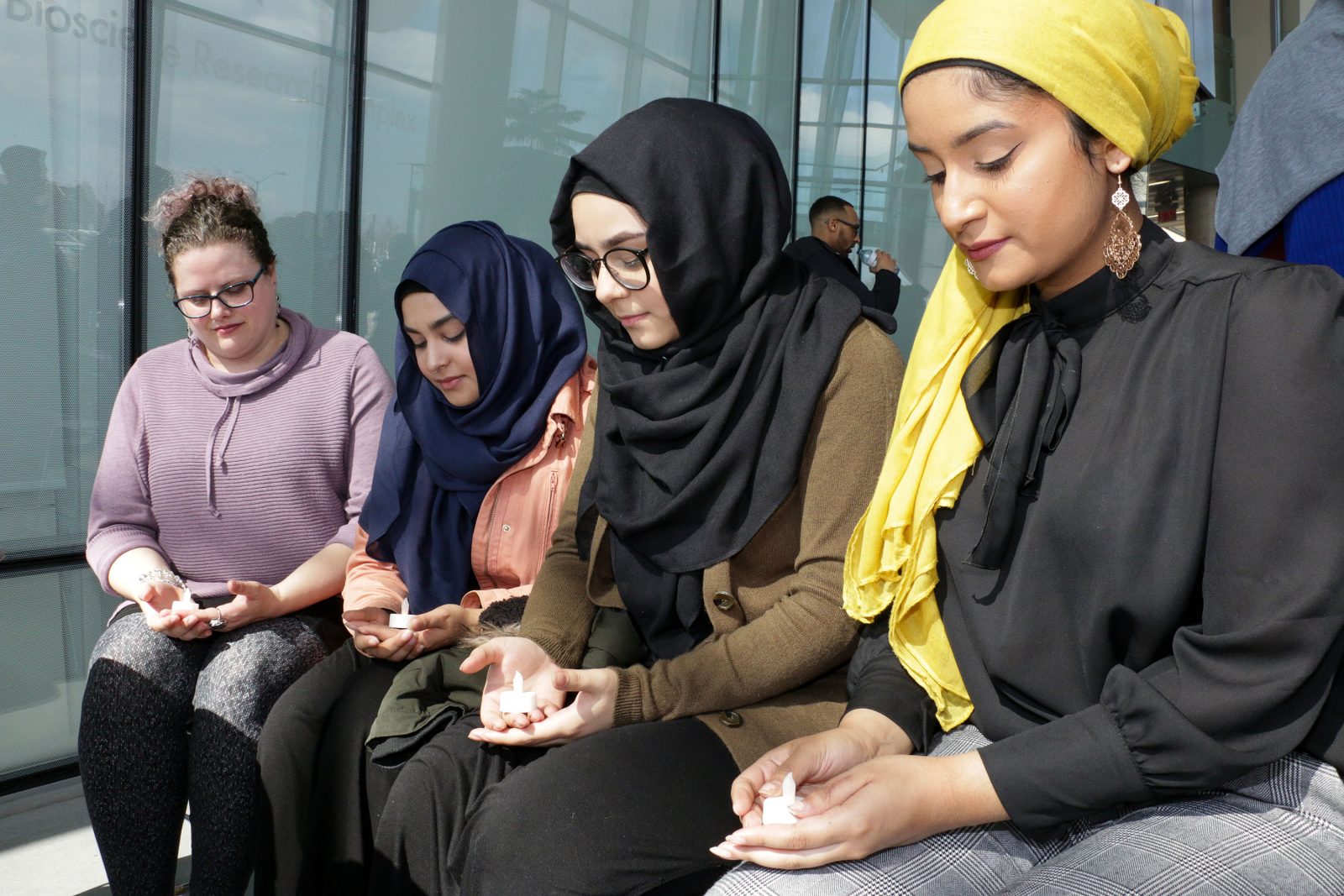 Brock Academic Advisor Diana deMan joined students Ateeba Khan, Iqra Khan and Raadhiyah Zowmi in a moment of silence at a vigil held on campus Tuesday, March 19 in honour of victims of the recent terrorist attack in Christchurch, New Zealand.

It’s a time not to build walls, but to build bridges.

The call to form unbreakable alliances rang strong through Scotiabank Atrium in the Cairns Complex Tuesday afternoon during a vigil to remember victims of last week’s terrorist attack in New Zealand and to stand for inclusivity in the Brock and wider community.

About 150 people came together to offer a moment of silence and to listen to the calls to action delivered by a series of speakers who hoped to help inspire change, beginning on campus.

“We are here to remember and to mourn 50 lives lost too early — lost to extremism, bigotry and hate,” said Leela MadhavaRau, Director of Brock’s Office of Human Rights and Equity. 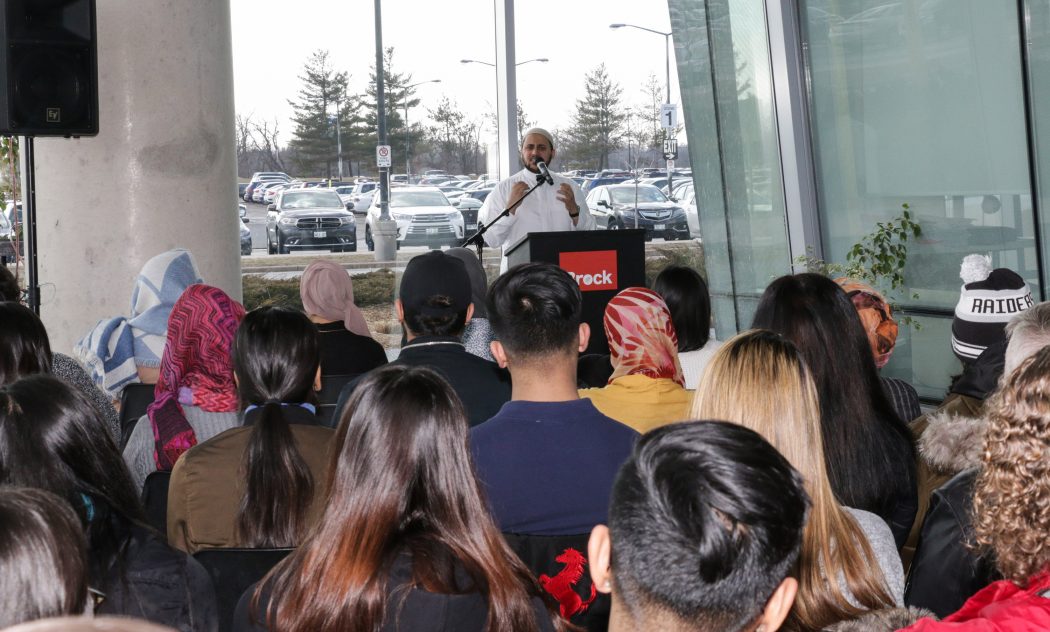 Hate crimes are on the rise, she said, and such acts born of Islamophobia, white supremacy and terrorism “cannot be considered a normal part of our world; it must be seen for the disease it is.”

But the cure to this plague is already known, she said. “It is us.”

“We are the ones that will make the difference. We can trace the pathway … we can work together to call out bigotry when we hear it on school playgrounds, in our classrooms, with our friends and in casual remarks on buses. We need to create unbreakable alliances, between faith groups and communities, across identities and intersections.”

Hosam Helal, Imam and Religious Affairs Director at Islamic Society of St. Catharines and Associate Chaplain at Brock University, spoke passionately to the crowd, asking those in attendance not to close themselves off, but to reach out to one another in this trying time.

“Sometimes it’s easy to give up, to stop and say ‘this is not my problem; this is way beyond me,’” he said. “Instead, do the best that you can. Be part of the relationship building; be part of the reaching out. This is a time not to build walls, it’s a time to build bridges.”

He urged people to get to know each other better and to find time to discuss common ground, as human beings.

That message of togetherness was echoed in the statements of several speakers, including Bilal Khan from the Brock University Students’ Union, Leila Meskine from the Graduate Students’ Association and Zack De Bruyne from Brock’s Faith and Life Centre.

Brock Student Life Director Brad Clarke, who spoke on behalf of the President’s Advisory Committee on Human Rights, Equity and Decolonization (PACHRED), reinforced the idea that each member of the Brock community, as well as the institution as a whole, has a responsibility to influence a culture of working and learning that is safe, welcoming, equitable and inclusive.

“We have an individual and collective responsibility to call out and combat Islamophobia and other forms of racism, whether subtle or extreme. We must commit to supporting our Muslim colleagues — students, staff and faculty —  and to working closely with the Muslim Students’ Association, local faith groups and others during this very difficult time.”

Fouad Jibril, outgoing President of the Brock Muslim Students’ Association, said the vigil was a catalyst to bring people of all different faiths together in unity. 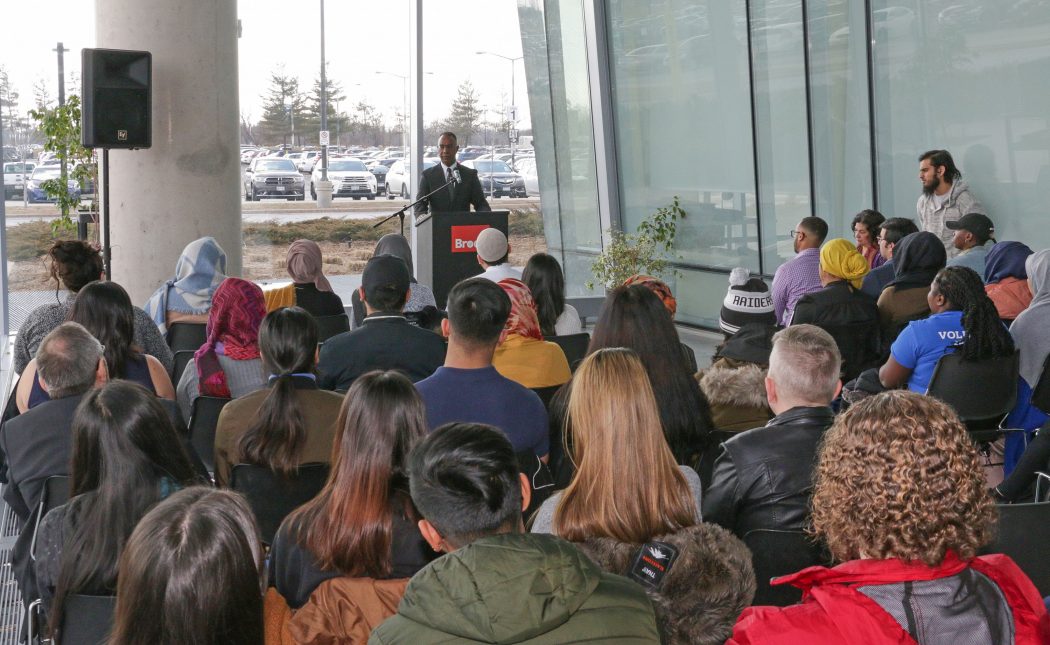 “It’s bringing us together to understand one another,” he said of the event. “It’s more than just a vigil recognizing the innocent lives that were lost but an opportunity for us to come together as humans, as people to support one another and to understand where we’re all coming from.”

Brock President Gervan Fearon recognized those in attendance have challenges before them — to find peace in the wake of violence, love in the presence of hate and terror, courage in moments of terrorism and hope in moments of despair — but urged them to face them head on, together.

It’s a responsibility, he said, that “extends to each of us: as individuals, as members of the Brock community, as Canadians and as members of humanity.”

He encouraged people to go out into the world as leaders, embracing hope and promoting peace through their words and actions.

In addition to the vigil, a discussion panel is being planned for Tuesday, March 26, also in the Scotiabank Atrium in the Cairns Complex.

Challenging Islamophobia will take place from 11 a.m. to 1 p.m. and will include several speakers who will touch on various aspects of the theme.

More details are expected to be published on The Brock News in the near future.