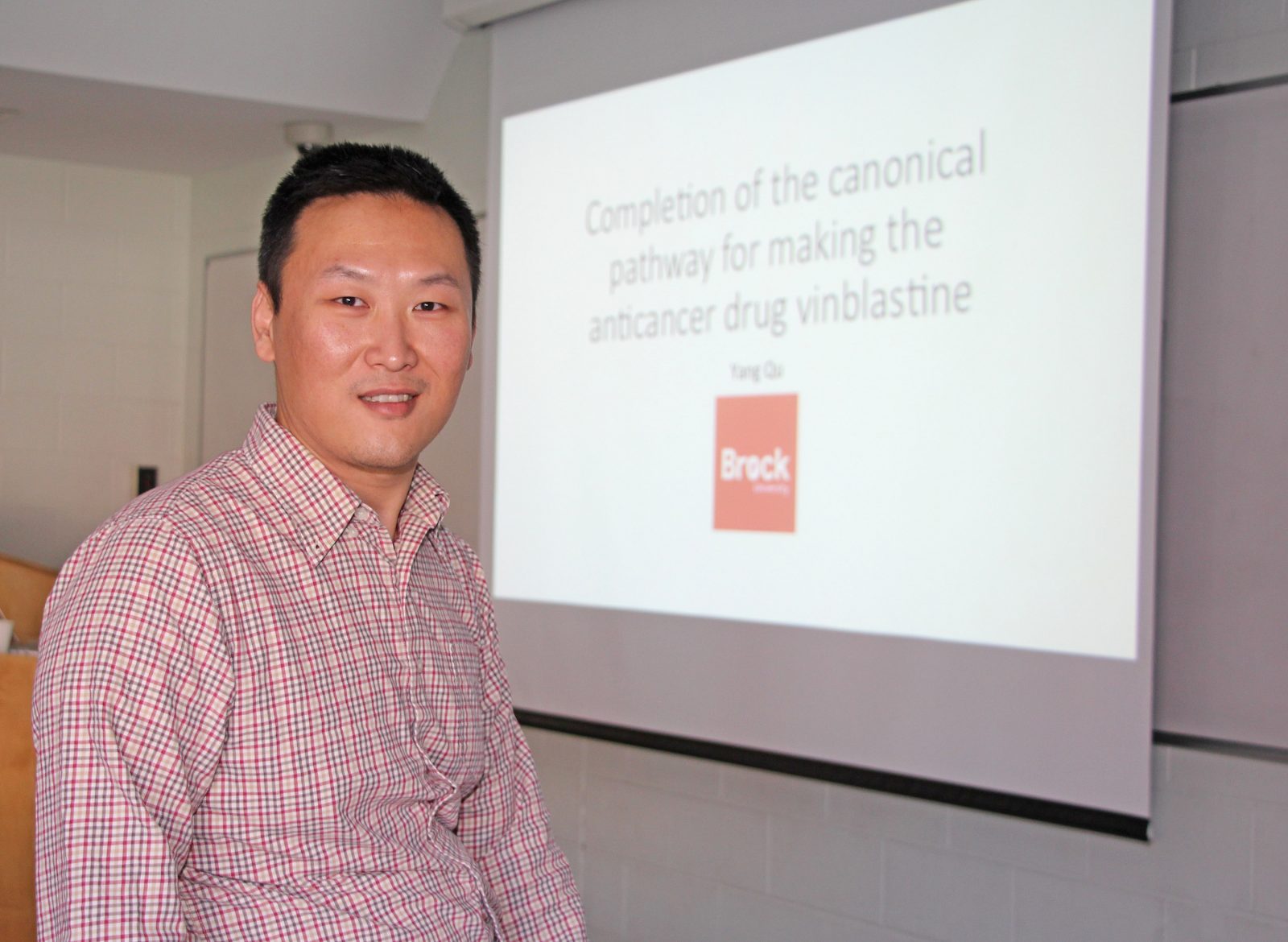 A post-doctoral scholar who has been researching anti-cancer drugs at Brock University has been named Canada’s first Research Chair on cannabis health by the University of New Brunswick.

“Qu’s outstanding work in Professor De Luca’s research group has established him among the emerging leaders in his field,” said Tim Kenyon, Brock’s Vice-President, Research. “He will bring his gifts for inquiry and the powerful applicability of his work to his Research Chair position, to the benefit of his new colleagues at the University of New Brunswick.

Kenyon said the appointment is reinforcement of the high-quality research taking place at Brock.

“A culture of research excellence and collaboration provides post-doctoral fellows at Brock with valuable opportunities, while the Brock community in turn benefits from the contributions of these groundbreaking scholars,” he said.

After earning his PhD in biochemistry from the University of Calgary, Qu came to Brock because of the world-renowned research being done by De Luca around the anti-cancer drug vinblastine found in the Madagascar periwinkle plant. In his five years working on De Luca’s team, Qu made significant contributions around the identification of genes involved in the synthetic production of chemotherapy drugs.

“The experience and expertise I gained in biochemistry and the metabolic engineering of natural plant products are directly applicable to the exploration of new opportunities in advancing the Canadian cannabis industry,” said Qu, adding that he’s excited to get started unlocking the medicinal potential of the cannabis plant.

“The legalization of both recreational and medicinal use of cannabis provided unprecedented opportunities for researchers to fully utilize this plant,” he said. “The major cannabinoids, tetrahydrocannabinol (THC) and cannabidiol (CBD) already exhibit great bioactivities, but additional medical applications may be found in the more than 90 other cannabinoids with future research.”

In addition to investigating the potential of other compounds found in cannabis, Qu said he hopes to devise a biosynthetic production platform that uses microorganisms to produce pure compounds and improve the genetics of the cannabis plant to reduce the production costs for greenhouse cultivation.

“Our research group is well-aware of Qu’s qualifications and ability to perform creative, novel and applicable research on this remarkable medicinal plant,” said De Luca. “We congratulate him on this achievement and we’re elated that our laboratory at Brock University has played a part in the development of a remarkable young and promising scientist.”