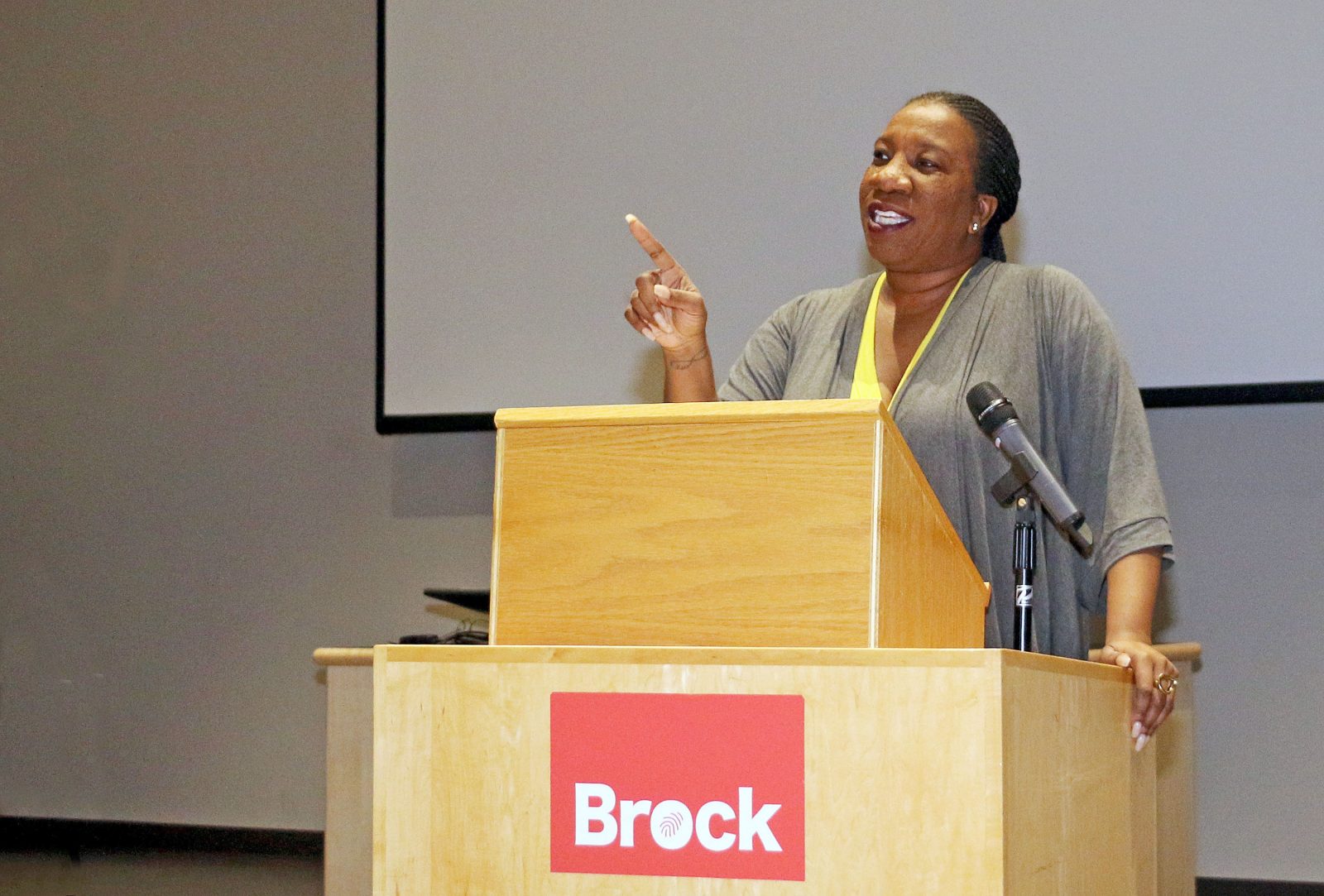 Behind each #MeToo hashtag, behind each sexual violence statistic, there is a person, says Tarana Burke.

The civil rights activist and founder of the #MeToo movement urged a sold-out crowd at Brock University to look beyond the statistics to “see the people, not just the numbers” during a powerful presentation Oct. 29 in Sean O’Sullivan Theatre.

“Think of the emotional labour behind each one of those hashtags,” she said of the movement that has swept the globe. “Each one is a person who agonized over whether or not to post. What if I post and nobody believes me? What if I say “Me Too” and nobody cares?”

The audience hung on every word as Burke recounted how the #MeToo movement began more than a decade ago, long before it became a hashtag and a worldwide celebrity-fueled media phenomenon.

Born in The Bronx, N.Y., Burke developed a program that gave girls in her community a safe, non-judgmental space to develop their self-worth and to be loved and accepted.

As her community work progressed, the need for programming around sexual violence became obvious. Burke described how unstructured conversations with children turned to discussions of sexual violence “always, without fail.”

In 2006, she created #MeToo as a community program to support young girls who had experienced sexual harassment, abuse or assault. Soon, women’s groups across the country began asking for the workshops and resource kits. Burke realized that “adult women needed the same help that we were giving to kids.”

#MeToo has had an online presence since 2007, but the movement gained sudden and significant recognition in 2017 with the rise of the hashtag after the Harvey Weinstein allegations went public.

Burke said she wasn’t surprised by the number of people who came forward.

“What surprised me is the sustained international dialogue around sexual violence,” she said.

She spoke of the importance of making the university campus a safe space.

“After all, this is often the first place where kids go to when they leave home. This is their community,” she said.

Burke read aloud the Brock University mission statement and issued a challenge: “Commit to making the campus less vulnerable to sexual violence” and “integrate that commitment into the mission statement.”

Speaking directly to students, she said the solution “should be made around you.”

“Me Too is a global community of survivors, advocates and allies committed to ending violence through healing and action,” Burke said.

“That work is growing, just as it grew 12 years ago: person by person, community by community, on the ground, from the ground up. The difference is that now we have more people now, more access to resources, a bigger voice.”

Burke encouraged the audience not to shy away from difficult or controversial conversations but rather to embrace them, especially in the coming season of family gatherings.

“Speak truth, but not just to power,” she said. “We’ve got to speak truth to each other.”

Shannon Kitchings, a research assistant in the Office of Human Rights and Equity Services, said Burke’s visit “signals that our community is ready to have these difficult conversations.”

In her closing remarks, Burke said her presentation was “not an awareness campaign.”

“We have a moral imperative. Let’s work together. Let’s heal together. If you are ready to do that work, I can only leave you with these two words: Me Too.”