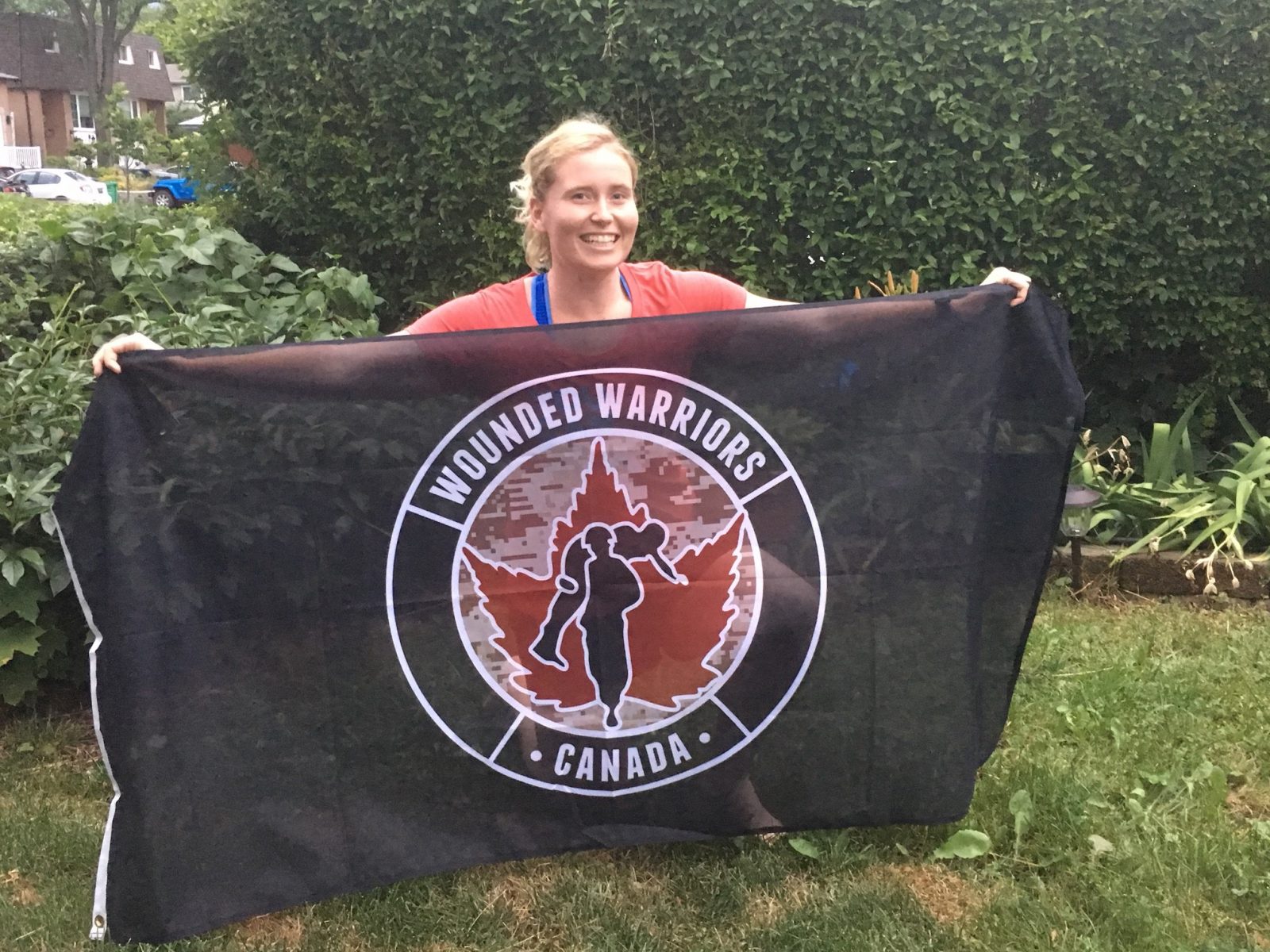 Brock alumna Katherine Dagenais (BA ’13) holds the Wounded Warriors Canada Flag that she will carry up Mount Kilimanjaro in February as a fundraiser for the organization.

Katherine Dagenais (BA ’13) believes there is no mountain too high to overcome.

But she hasn’t always felt that way.

It was during her time at Brock University that the alumna learned a lesson of perseverance and belonging that helped to change her outlook on life.

“When I joined the cross country team during my last year at Brock, I was a terrible runner and in desperate need of a healthy life change,” said the Political Science grad. “Our coach said I could be part of the team if I showed up and gave it my all, and it’s incredible how much her open-door policy motivated me to do better in athletics, academics and life.”

It was this initial feeling of being part of something greater than herself and pushing past her limitations that inspired the Mississauga native to set the ambitious goal to climb the world’s Seven Summits — the tallest mountain on each continent — and run a charity marathon in every U.S. state.

So far, she has checked 41 states off her list. In each community, Dagenais aims to find an influential charity she can support during her run.

In February, she will tackle her first of the prominent peaks, taking on Mount Kilimanjaro in Tanzania, Africa.

Joined by fellow Brock grad Kelsey Donahue (BA ’13), Dagenais will make the more than 19,000-foot climb in the name of a cause near and dear to her heart, Wounded Warriors Canada.

She plans to bring the organization’s flag, in addition to the Canadian flag, to the top of the mountain in order to raise both awareness and funds.

Dagenais’ husband is in the U.S. Navy and works at the Walter Reed National Military Medical Center in Bethesda, Md.

“Every day we see people who wish they can feel normal again or have the same abilities they did before,” she said of the wounded soldiers she has encountered.

Feeling fortunate to have health on her side, Dagenais wants to push herself to help others and feels the Canadian Armed Forces is a fitting beneficiary.

Dagenais knows first-hand the impact an act of kindness can have.

During her studies at Brock, she was moved by the countless hours her professors and TAs invested in teaching her how to study and learn.

“They were phenomenal toward me and are the very reason why I went from a 60 per cent average in my first few years to a solid 85 per cent in my last year,” she said.

The impact of their efforts and value of her Brock degree was only emphasized when she moved to the U.S., where she found post-secondary education to be more difficult to attain and more costly than in Canada.

Dagenais urged her fellow Badgers to make the most of their time at the University.

“I had a horrible misconception that it was better to self-sabotage and fail than to try your best and fail, and it was my biggest mistake in life,” said the 28-year-old Annapolis resident. “Now, thanks to my time at Brock, I am self-disciplined in all aspects of my life and it has been so enlightening.”

Dagenais said it was the people who took the time to help her along her journey that inspired her to pay that kindness forward.

“My Brock experience became the passport into my future of giving back.”