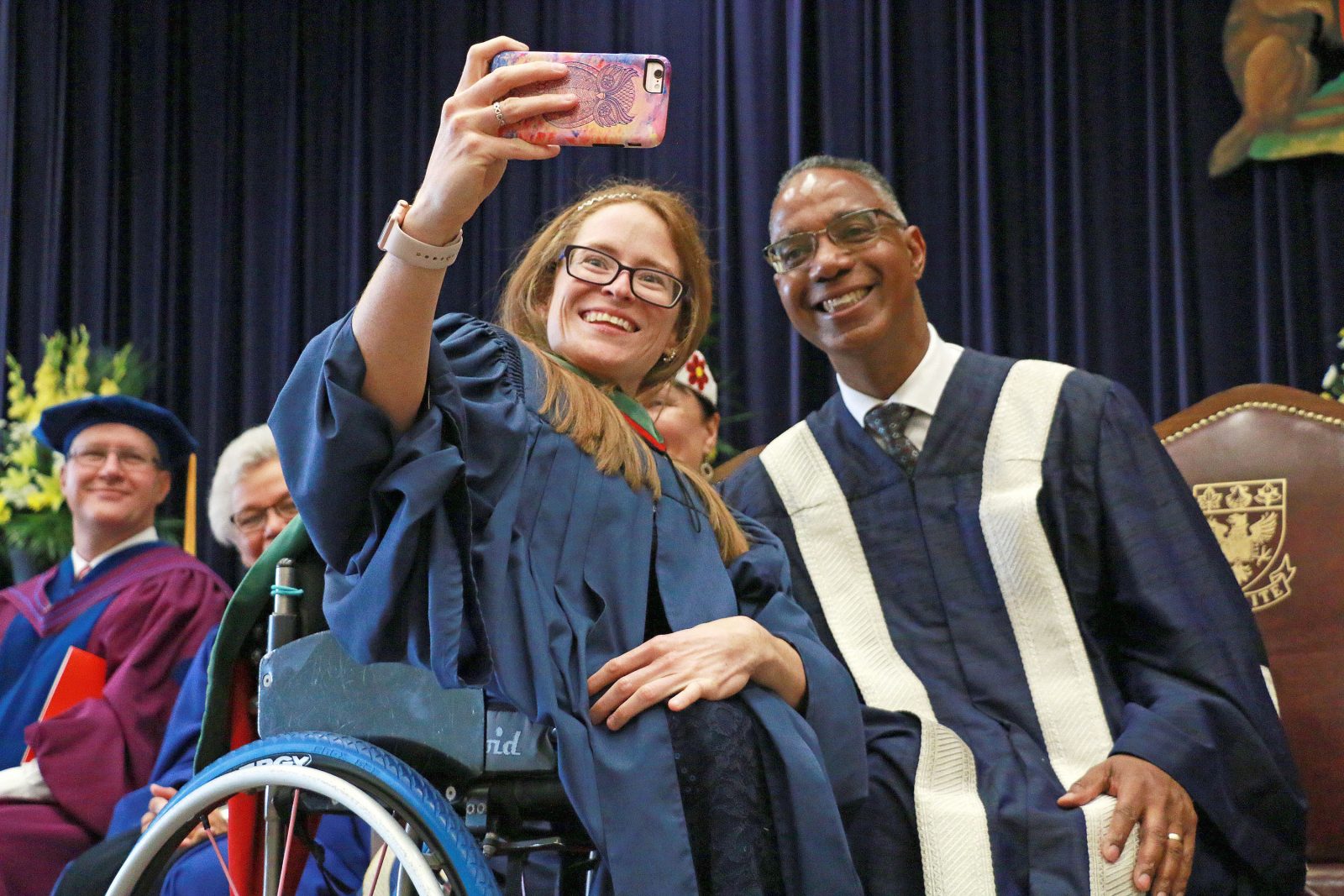 As an international wheelchair sprint racer, finish lines for Bermuda’s Jessica Lewis usually arrive in a matter of seconds.

But the finish line that took years to achieve — that as a student of Brock University — arrived on Monday, June 4.

Lewis made her way across the Convocation stage, pausing for a photo with Brock President Gervan Fearon, and then collected her degree in Rec and Leisure Studies.

The two-time Paralympian, who is known as the golden girl of Bermuda sports, knew Brock was going to be her school of choice before her family’s rental car had even reached the guest parking lot during a tour more than four years ago. 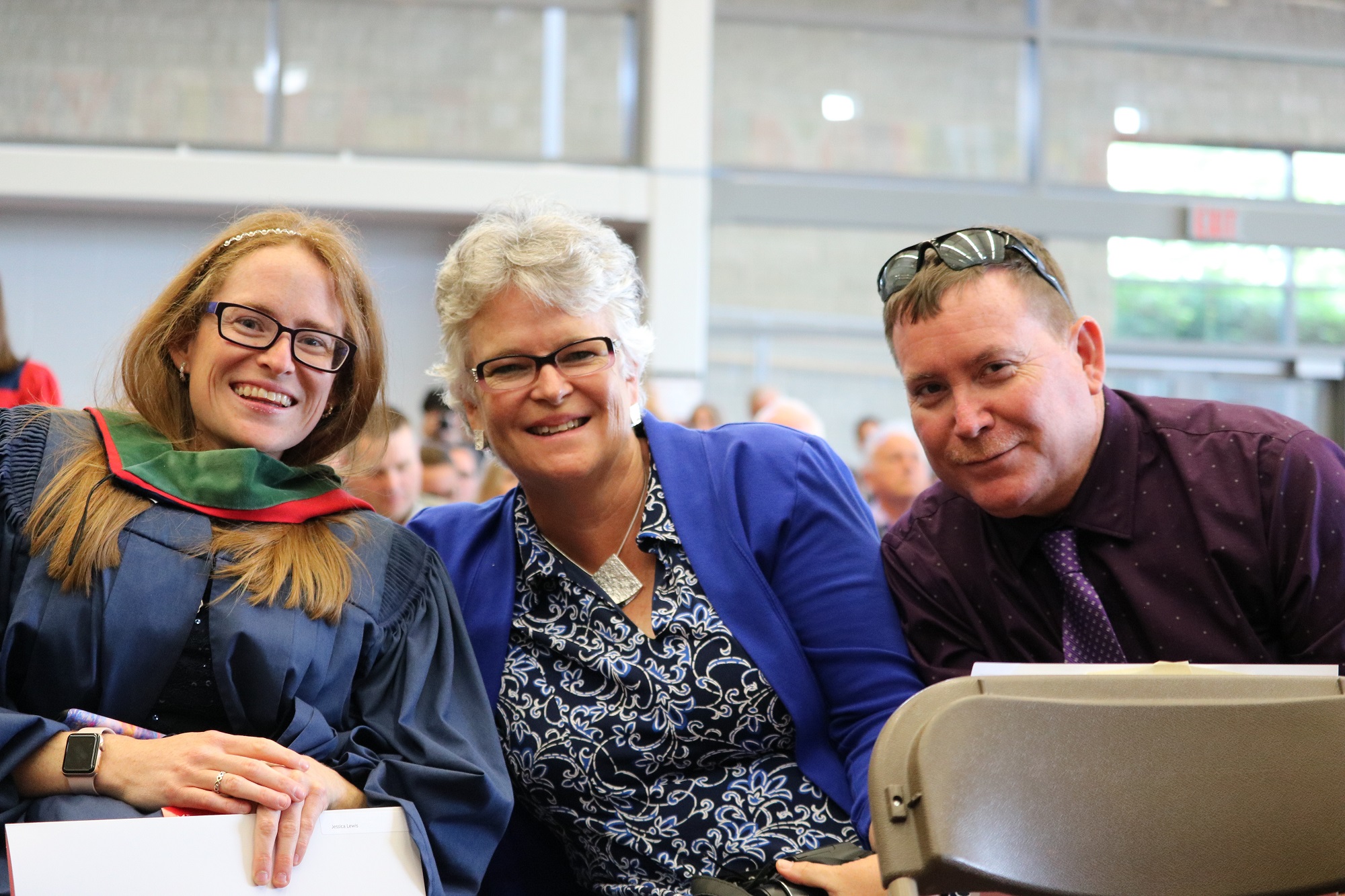 Jessica Lewis with her parents Lorri and Mark Lewis, who made the trip to Brock’s Spring Convocation from their home in Bermuda.

“As we came around the circle and I got my first glimpse of the cherry blossom trees, I started to feel like Brock was going to be it for me,” Lewis said.

As a Parapan athlete, Lewis wanted to find a Therapeutic Recreation program which would allow her to be close to her Mississauga-based Coach Ken Thom.

“Coach Ken played an important part in my decision to consider Brock,” Lewis said. “He was such a huge part of my life before and during my time here. The bond between an athlete and their coach is a very special one and he really helped me to be proud of who I am and build my confidence.”

The more she began to believe she could achieve, Lewis’s accomplishments grew on and off the track. As a T53 racer athlete, during her time at Brock, Lewis participated in numerous international wheelchair track racing competitions. She was the first-ever Parapan athlete representing Bermuda at the Parapan Am Games in 2011, and then she won the country’s first medal at the 2015 Games in Toronto. She also represented her country in three World Championships, winning bronze in 2015.

A busy training schedule meant juggling academics and athletics over the years. She also took on several public speaking engagements and served as vice-president of the Brock student group Awareness Breaks Limits for Equality (ABLE) in the 2015-16 academic year. 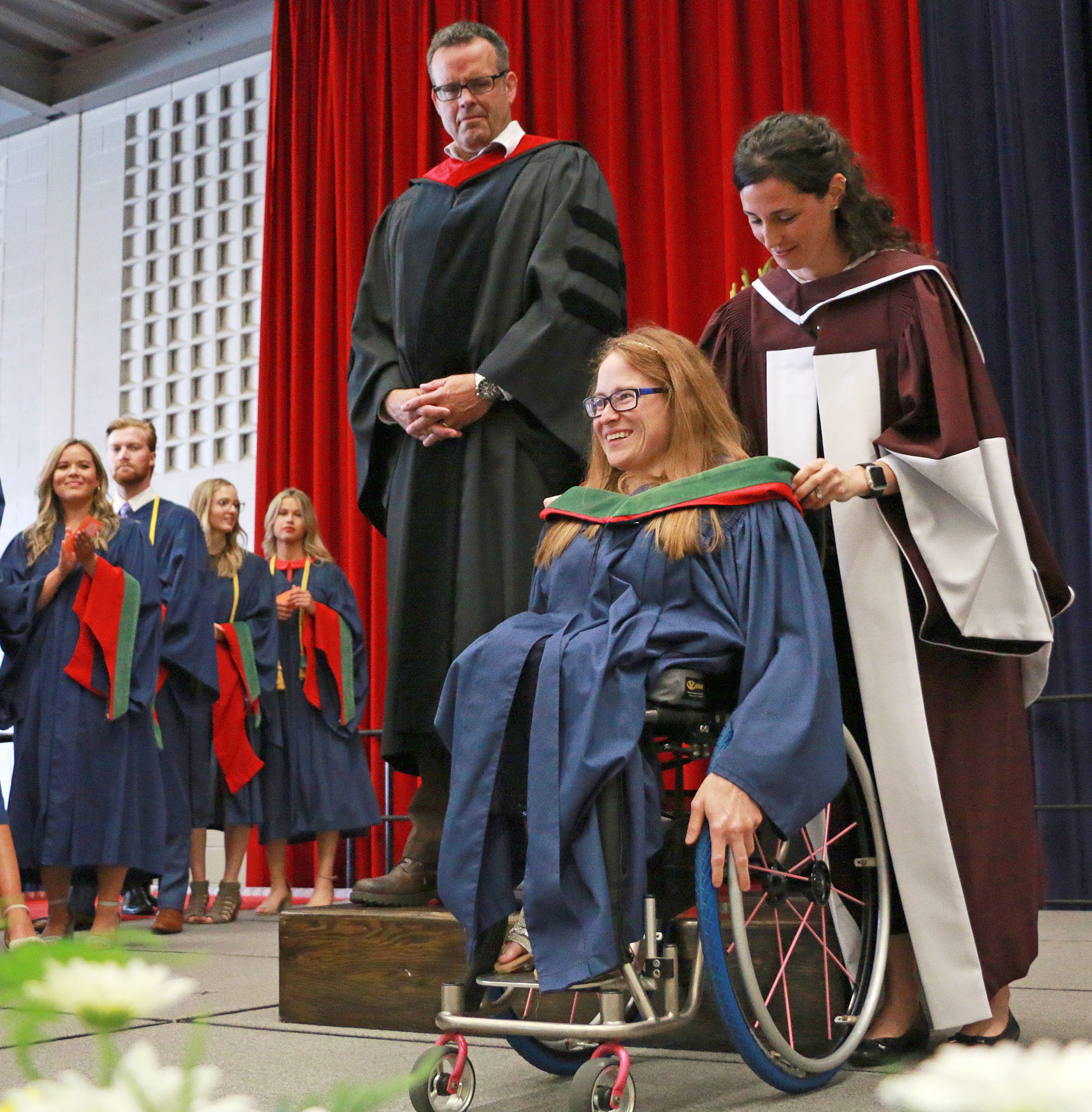 “As an athlete, I often get asked to deliver motivational speeches. These are great opportunities for me to challenge peoples understanding of what it means to be differently abled and raise awareness of equality issues,” she said.

Just as Brock has been an important part of her young life, she too has left an indelible mark on all those who have come to know her.

She was awarded the 2017-18 Brock University Accessibility and Inclusion Award and, as an inspiration to her country, Lewis also selected as the Most Fascinating Person of Bermuda for 2015.

“Living on a small Island, we always knew that Jessica would attend University overseas,” said Lorri Lewis. “As a mother, it has been very hard having my daughter be more than 1,600 kilometres away, but it was the next chapter in her life and what a chapter these last seven years have been.”

The Lewis family extended their appreciation to the Brock University community for being so incredibly supportive of Jessica’s academic and racing career, especially last fall, when Jessica’s journey with Coach Ken was cut short when he passed away suddenly.

“It has been comforting to know there were lots of people around to support Jessica,” said Lorri Lewis. “We are so very proud of her and we know that Coach Ken will always be her biggest fan.”