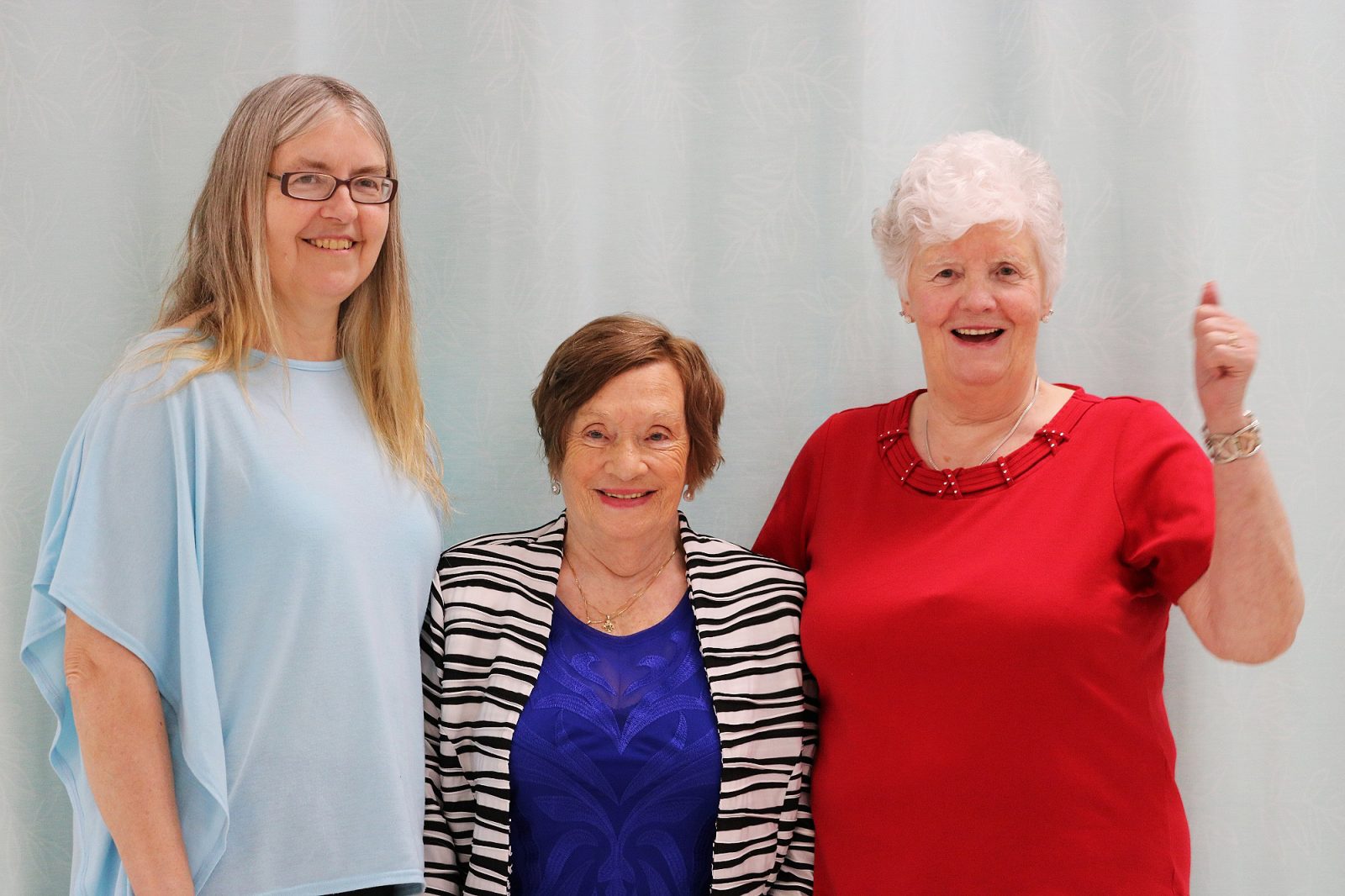 Laura Carrier, Ruth Hughes and Anne McLay are participants in the Heart Innovation Research Program. They will be featured in an informational video about their lived experience of early warning signs of heart disease.

Shortness of breath. Dizziness. Tightness in the chest.

When these symptoms arrive irregularly and in isolation, they often get shrugged off and ultimately go untreated.

But Sheila O’Keefe-McCarthy is hoping to better inform the public of what these health incidents could mean.

“Imagine experiencing unusual symptoms at unexpected times that come and go with such irregularity you regard them as only odd and do not recognize them as warning signs related to poor heart health,” says O’Keefe-McCarthy, Assistant Professor in Brock’s Department of Nursing. 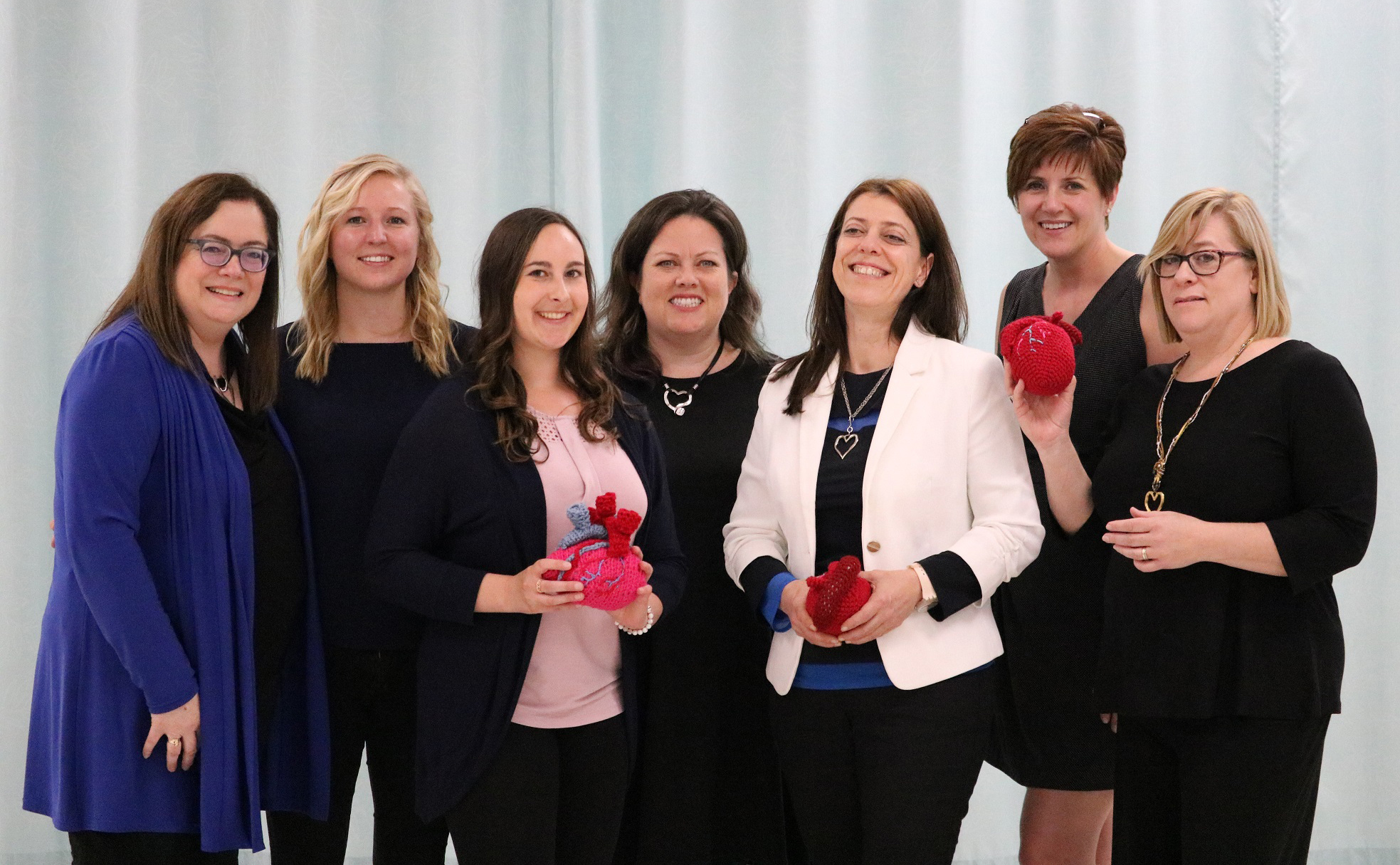 Department of Nursing Assistant Professor Sheila O’Keefe-McCarthy, left, and the Heart Innovation Research Program Team show off the crochet hearts that were given as a gifts to the investigators as a way to express the learning preferences of women that came across in the data.

Many women who have suffered a heart attack look back on symptoms they have experienced, not realizing they should have raised red flags.

In response, O’Keefe-McCarthy has now launched the Heart Health Education Resource website, a first of its kind series of resources intended to educate women and men on the early warning signs of heart disease.

“Lack of recognition of cardiac-related warning signs are a very common occurrence,” says O’Keefe-McCarthy. “One woman recently shared with me that a few months before her heart attack she started to experience an unexplained shortness of breath when she was walking, but it only lasted a few minutes and then stopped.”

The woman described two more incidents with the same breathlessness, but started to have other symptoms with it as well.

“She suddenly became dizzy and had the same shortness of breath, only this time there was tightness in her chest. Then it went away,” O’Keefe-McCarthy recalls.

Many women who experience similar episodes do not seek medical advice.

“Unfortunately, this woman continued to have frequent symptoms for about two weeks before her cardiac event,” O’Keefe-McCarthy says. “She described having a massive blinding headache that came out of nowhere and lasted only minutes; this happened again 24 hours later, except the pain lasted longer, about 20 minutes.”

Each of these events was totally unexpected and happened during normal, everyday activities. The next day she had a heart attack.

This is one example of the kinds of participant stories that capture women’s individual experiences of what they now realize were the early warning signs leading up to a heart attack within O’Keefe-McCarthy’s Heart Innovation Research Program.

“One participant told me she knew in the back of her head for the last couple of months that something was wrong, but didn’t seek medical attention because it didn’t last,” shares O’Keefe-McCarthy. “This is reflective of a woman’s heart attack experience. These seemingly short and isolated incidents are symptoms of an unhealthy heart.”

O’Keefe-McCarthy has heard this type of scenario hundreds of times before, both in her research and as a critical care nurse for more than 25 years.

Her new website is the culmination of two years of research and community engagement funded by the Women’s Xchange initiative and is designed to be an educational intervention that women and men with cardiac disease, community health advocates and health-care professionals can utilize.

Development of the website’s multimedia education strategy was created with heart attack survivors and partner organizations including Heart Niagara, the Cardiac Health Foundation of Canada and the Canadian Council of Cardiovascular Nurses to help support knowledge exchange in the community.

The website officially launched on May 25 at the Canadian Council of Cardiovascular Nurses spring conference in Niagara Falls.

More information on the products and resources is now available on the Heart Health Education Resource website.