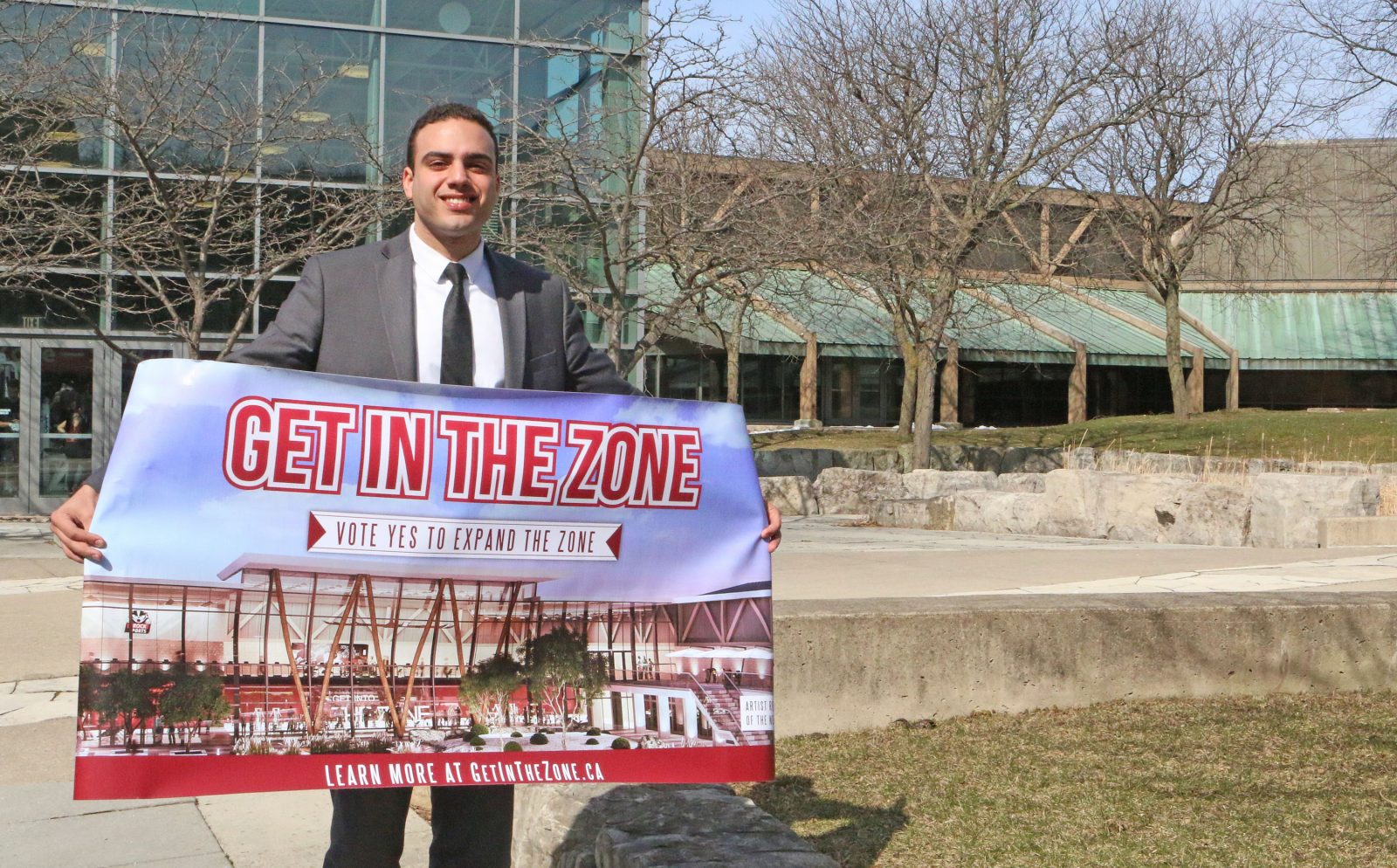 Regular users of the Zone fitness centre have a common complaint: it’s packed.

With all of Brock’s nearly 19,000 students having unlimited access to the Walker Sports Complex’s fitness centre, finding an open treadmill or weight machine can be a challenge. The problem is particularly acute when many employees try to get in a noon hour workout.

Outgoing Brock University Students’ Union President Faisal Hejazi is hoping his lasting legacy at the University will be to fix that problem. In a referendum March 27 to 29, students will vote on whether or not to finance a $6.8-million expansion that would triple the size of the Zone.

When Hejazi was elected president last year, he promised to have the Zone expanded.

“As I was running for president, I ran a survey of 1,000 students and their two major concerns were a need for more study space on campus and Zone capacity,” he said. “Student mental health is an extremely important topic and there is lots of research that shows that there is a direct positive relationship between physical activity and mental health.”

Along with other BUSU executives and Brock staff, Hejazi spent the past year researching Canadian universities’ fitness centres. What they found was startling.

“Brock has the smallest fitness facility of any Ontario university, and the second smallest square-foot-per-undergrad ratio in Ontario,” he said.

The current Zone, opened in 2001, is 4,300 square feet. That puts Brock’s ratio at .29 square feet per undergraduate student, in front of only York at .24. McMaster is currently building an 80,000-square-foot fitness centre while Queen’s currently has the largest in Ontario at 24,500 square feet.

The proposed expansion would increase the Zone to 15,600 square feet, and include two storeys of workout space along with a BUSU meeting space.

Hejazi said when the Zone first opened, Brock had fewer than 12,000 students, all of whom had to pay a membership fee to use the space. In 2011, a new Student Life fee gave all students unfettered access to the space. Which is why it is so busy today.

“Because of how busy the Zone is, you have students at Brock paying $300 and $400 to go to a gym elsewhere in the city when they’re already paying to use this space.”

Next week’s referendum will decide if the Zone expansion moves forward through student fees. The $6.8-million maximum project cost includes purchasing new fitness equipment for the expanded centre, and BUSU is proposing a $17 per credit fee for all full- and part-time undergraduate students over a period of five years, starting in September 2020 when the expansion is completed. After the five years it takes to pay for the project, students would then be charged a $1.25 per credit fee to cover maintenance and operations costs.

“People have asked why I’m doing this when I won’t be here to use it, but this isn’t necessarily about the students of today,” said Hejazi. “Every student on campus should want to leave Brock better than they found it. This would be a legacy piece for everybody.”

If the referendum passes, construction is expected to begin in the next eight to 12 months. The existing Zone will remain untouched until the summer of 2020, when it would close for two weeks for the wall between the new space and the old to come down.

Hejazi said the project wouldn’t have gotten as far as it has without the support of many people across campus.

“This may have been my idea, but there have been so many hands that have contributed to this journey. It’s amazing how much you can accomplish when nobody cares about getting the credit.”

An artist’s rendering of the proposed Zone fitness centre expansion, which will go before a student referendum March 27-29.