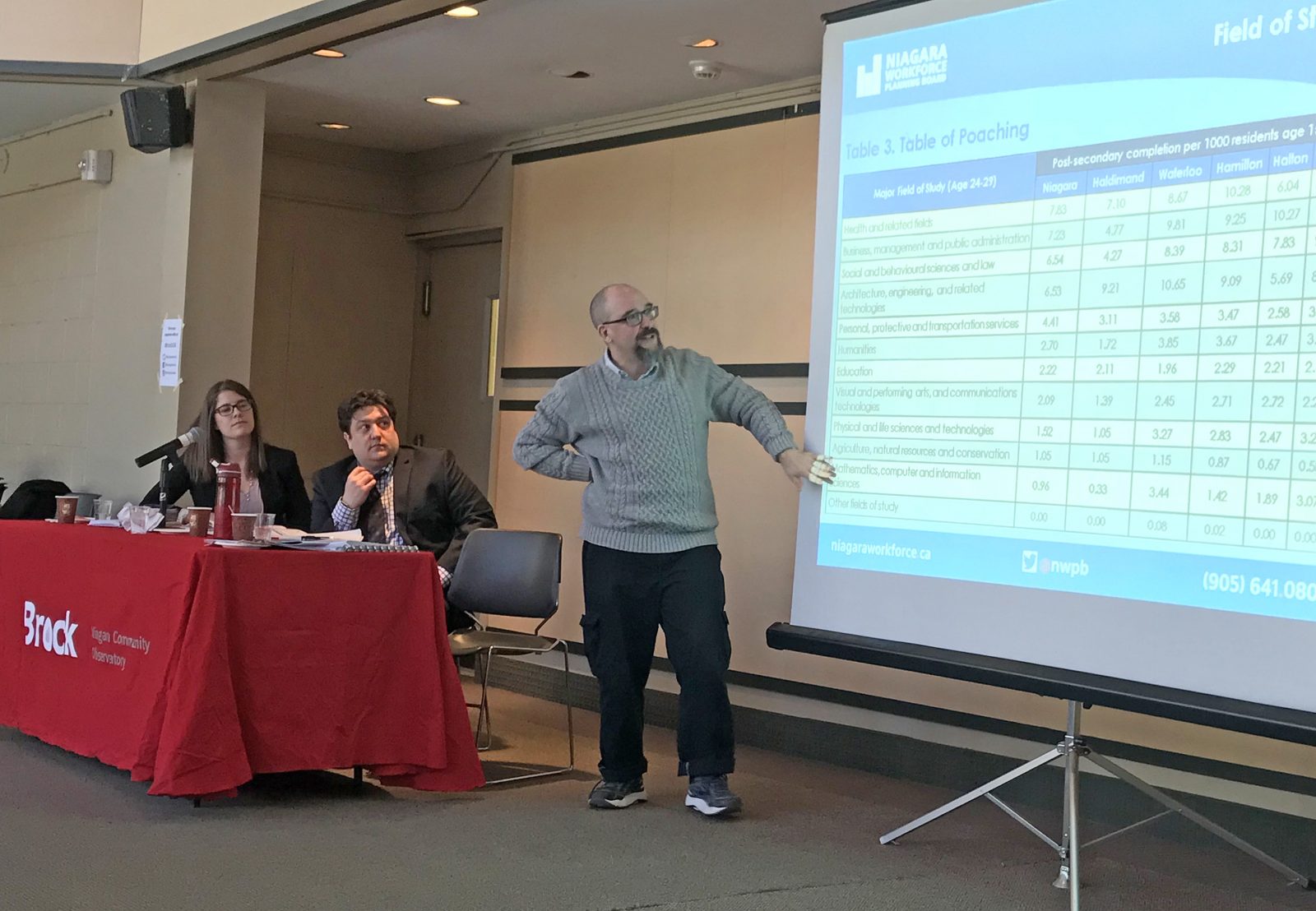 A significant portion of Niagara employers hire their staff through the ‘hidden’ job market, according to a newly-released youth employment policy brief co-researched by Brock University.

Brock’s Niagara Community Observatory (NCO) and the Niagara Workforce Planning Board (NWPB) estimate that 20 per cent of the region’s employers could be using private job boards, paywalls and other publicly inaccessible ways of recruiting employees rather than advertising positions openly.

This makes it difficult for researchers and policy-makers to assess job demand in the region and come up with ways to address youth employment, according to the brief “Youth in Niagara: Highly Skilled, Highly Mobile,” released Tuesday, March 20 at Brock.

Expanding on earlier research by the NCO, the Youth in Niagara brief expands population, education and occupation numbers to give a snapshot of the area’s youth employment situation and employment sectors most likely to hire youth.

“If Niagara is going to be a region that remains globally competitive, and one that can energize growth in small-to-medium enterprise, then it is vital for us to engage in research topics that help us map and leverage our talent opportunities,” said NCO Director Charles Conteh.

Mario De Divitiis, NWPB CEO, said the research is an important tool for the region.

“This project demonstrates what happens when local research organizations collaborate on topics that serve the local needs while laying the groundwork for approaching systemic workforce challenges,” he said.

The policy brief notes that there are no specific measures of capturing youth employment numbers outside of specific programs, as age-targeted hiring generally goes against labour and human rights legislation.

Of the 11,995 entry-level job postings in Niagara the researchers examined during 2017, 74.4 per cent were located in Niagara Falls, St. Catharines and Welland, even though those cities house only 61.1 per cent of Niagara’s population.

About a third of jobs in this sector are part time, according to the report. Jobs in this sector had among the lowest incomes in 2016. Yet Niagara’s youth are highly educated, with 64.2 per cent of the region’s 25- to 29-year-olds possessing a post-secondary certificate, diploma or degree.

Their top three areas of study are: health and related fields; business, management and public administration; and social and behavioural sciences and law.

The researchers urge employers to advertise their job postings publicly, not only to help young people get jobs, but also to enable policy-makers and organizations to create programs and services for those looking for work.

“The challenge with the hidden job market is that, as we move into a more data-driven economy, we are going to see more tools for job seekers and employers depending on open data,” said NWPB research and project manager Adam Durrant.

“If that data is only reflecting a slice of what the market actually needs, then we can reasonably expect it to have a ripple effect into training programs or hiring incentives,” he said.

The brief recommends providing companies with nine or fewer employees a job posting template. This would make it easier for them — and policy-makers — to get a good picture of labour demand and recruit for the positions.

“By creating a culture where it is easier for employers to hire through transparent and measurable means, we address both the short-term challenge of getting a person into a job, and the longer-term challenges of maintaining balance between labour supply and demand,” Conteh said.