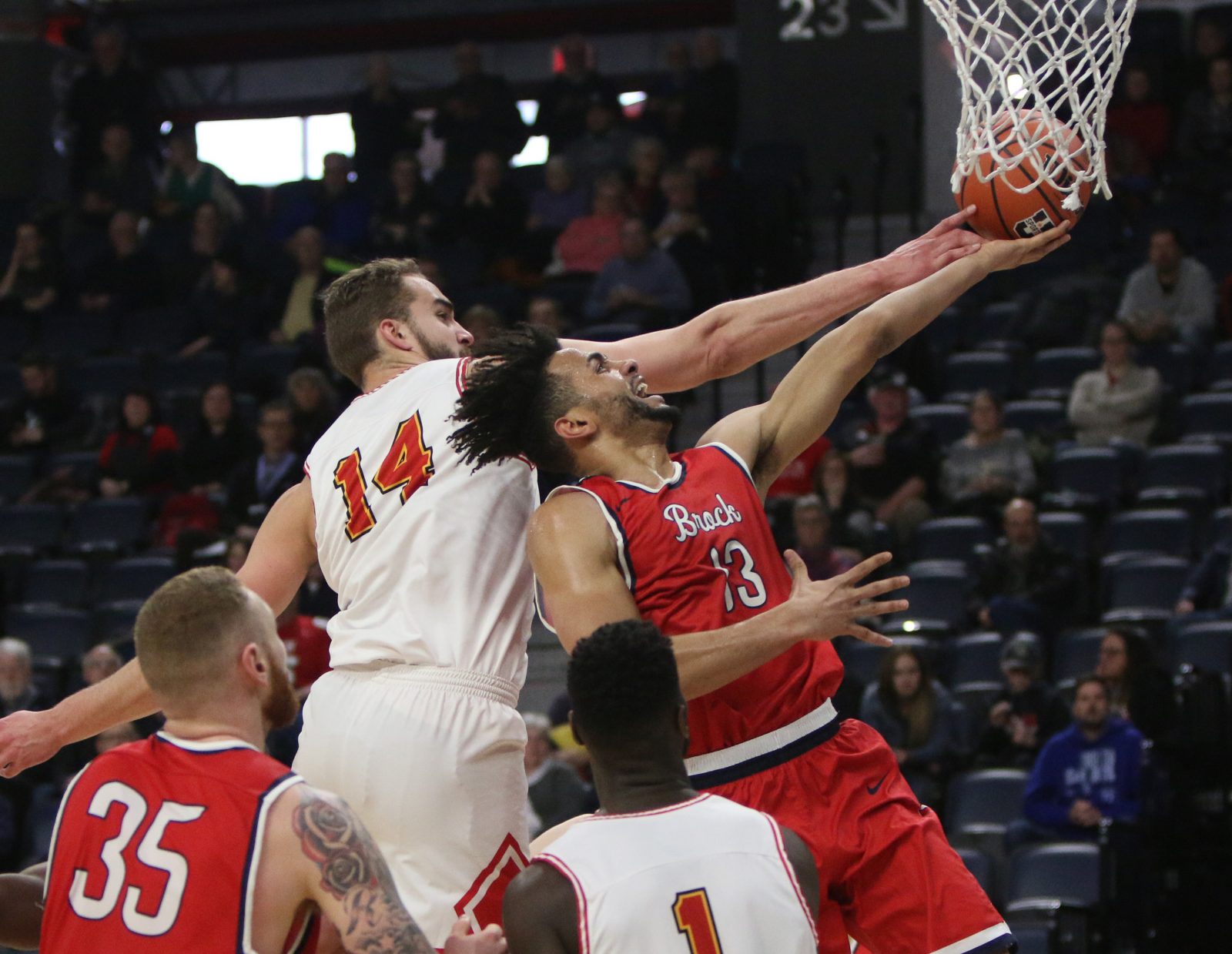 Brock Badgers forward Dani Elgadi and Calgary Dinos player Connor Foreman fight for a rebound in the first half of the USPORTS National Championships quarter-final Thursday, March 8 at the Scotiabank Centre in Halifax. Calgary beat Brock 78-76.

If the Brock Badgers season is like a movie, as senior Dani Elgadi has described it, then Thursday’s USPORTS National Championship quarter-final was like an action movie where the hero doesn’t come out alive.

The Badgers men’s basketball team came oh-so-close to a dramatic win in their opening game at the USPORTS Final 8 in Halifax on Thursday, March 8, but a last-ditch, three-point shot from Johneil Simpson fell short of the rim and into the hands of the celebrating Calgary Dinos. 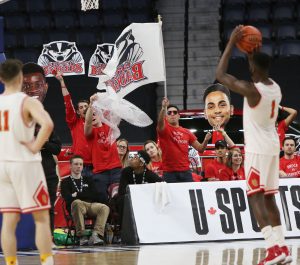 Brock fans try to distract Calgary Dinos player Mambi Diawara as he takes a free throw in the first half of the USPORTS National Championships quarter-final Thursday.

It secured a 78-76 win for the second-seeded Dinos over the seventh-seeded Badgers, whose tournament is not over, but who can now do no better than winning the consolation title.

As players came off the court, their reactions were a mix of shock, disappointment and heartbreak.

“Any time you can play on the national stage it’s a good opportunity, but that wasn’t the result we wanted,” said Simpson, who led all scorers with 24 points in the game.

As he tried to comprehend the narrow loss, head coach Charles Kissi said he can’t be disappointed in his team.

“I’m proud of the energy and the effort they put in all season, not just today,” he said. “One game does not define our season. Whether people give us credit for it or not, we’ve had one of the best seasons of any team in the country and with a young team.”

Getting to the national championships was Kissi’s goal when he arrived at Brock five years ago, and the fact they achieved that goal wasn’t lost on him.

“You’re talking about a team five years ago that was 4-18 and one of the worst in the country and now we’re in a national tournament competing for the title. I think that’s pretty special. I think we’re in a good place and we’ll continue to build and get better,” he said.

For Elgadi, the loss Thursday means his dream of ending his university career with a USPORTS championship won’t happen. But he said it won’t change how hard he plays in the rest of the tournament this week. Brock will play in the consolation semifinal round Saturday against the University of New Brunswick Varsity Reds with a chance to play in the consolation final Sunday. 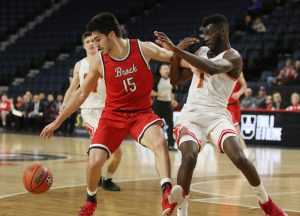 Daniel Cayer of the Brock Badgers fouls Mambi Diawara of the Calgary Dinos.

“It’s tough. I’m still soaking in how I’m feeling, but I’m a basketball player and I play to the end. That’s how I was coached. We have games to play, but it’s tough,” he said.

The fact Brock was even in a position to win the game at the buzzer speaks to how good they played in the second half against Calgary Thursday.

A nervous-looking Badgers team missed shots and made mistakes in the first quarter, allowing Calgary to open a 22-12 lead. But Brock outscored the Dinos in each of the final three quarters, finally clawing back to take the lead with seven minutes remaining.

The two teams exchanged the lead four times in the fourth quarter, with Brock holding a four-point lead at one point, but Calgary came back and got the eventual game-winner from Mambi Diawara with 45 seconds remaining.

Brock chose not to foul the Dinos when given the opportunity in the dying seconds, but Kissi rolled the dice in a decision that nearly paid off.

“It’s just one of those decisions you have to make. If it works out you’re a hero and if it doesn’t then it was a terrible decision. But you have to make decisions and live with them. It’s part of the game. I don’t regret any of them. I’m proud of our guys,” he said.

Worth noting was the loud Brock-biased crowd at the game. More than two dozen fans travelled 23 hours on a bus to make it to Halifax for the tournament. They will now get to cheer on the Badgers Saturday at 11 a.m. when they play the Reds. A win there will send them to the consolation final set for Sunday at noon. The other games Sunday include the bronze game at 2 p.m. and the championship final at 6 p.m. 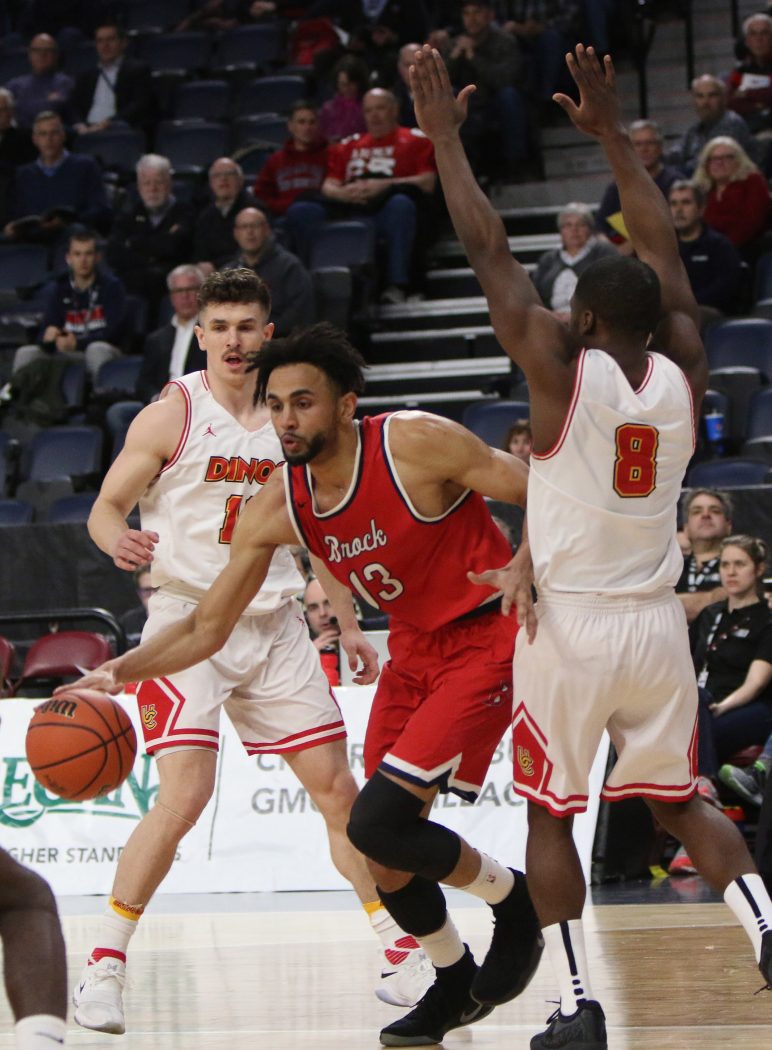