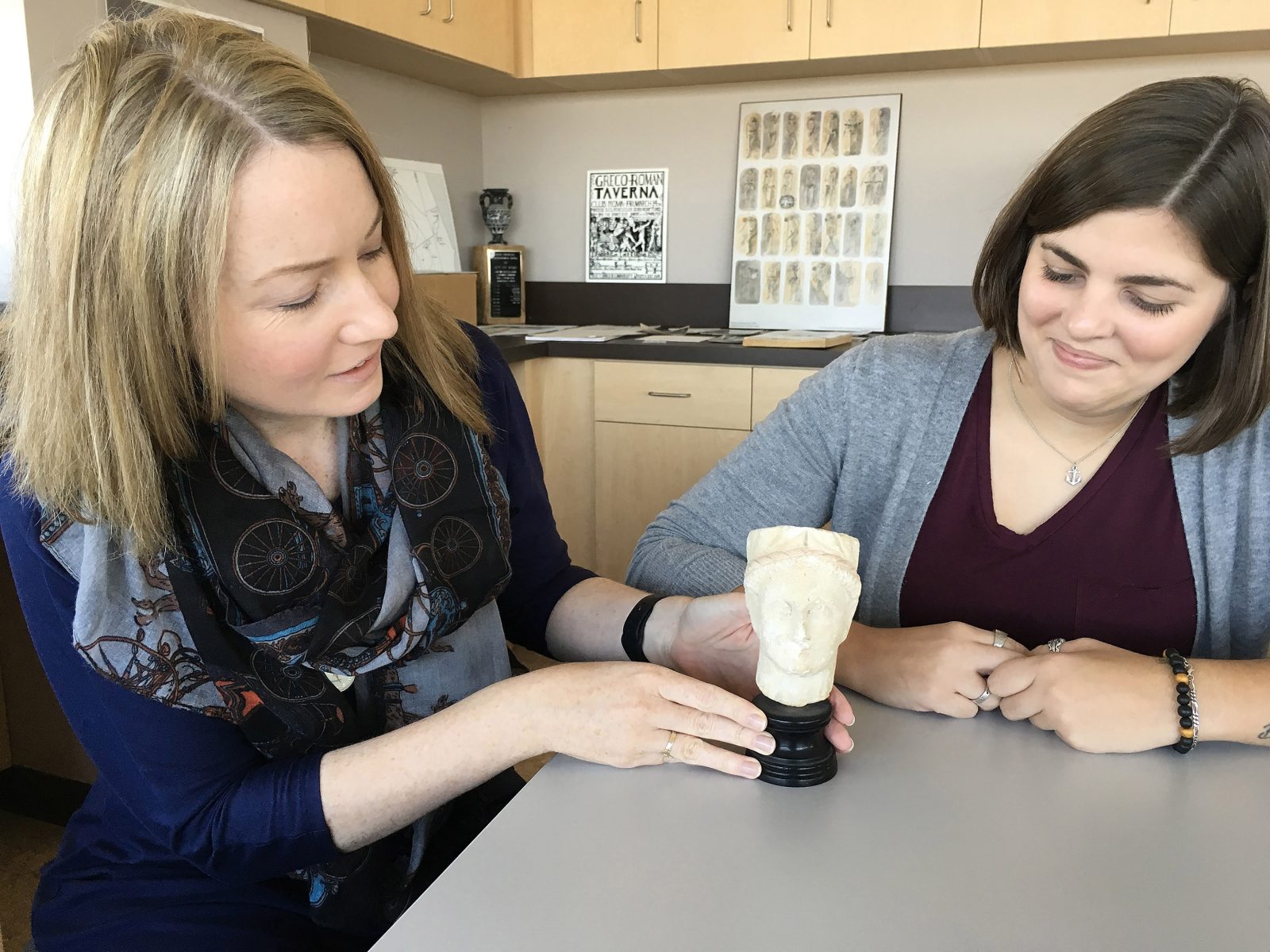 Department of Classics Assistant Professor Carrie Murray, left, and student Olivia Holcombe examine a fourth century BC limestone head from the Cypriote Museum collection. Murray will be sharing her research into female votive figurines at the upcoming Brock Talks instalment on Wednesday, Feb. 28.

Brock Talks aims to build bridges of understanding between humanities scholars and the local community.

Held six times a year at St. Catharines Public Library, the lecture series is designed to encourage the open exchange of ideas and facilitate interaction between Brock academics and the public.

During each instalment, scholars from the Faculty of Humanities share their research and answer questions from those in attendance.

“The idea was to bridge the divide that can easily and all too often does open between a university and the larger community of which it is a part,” says English Professor Tim Conley, who started the collaboration in 2012.

Conley was inspired in part by the Q&A sessions held by the physicist Richard Feynman at CalTech, during which Feynman would answer physics questions from the crowd.

“The public doesn’t necessarily know or understand what we do,” says Conley. “We wanted to share the kinds of high-quality research being undertaking at Brock, and open up a Q&A session after each lecture.”

The St. Catharines library has been a keen supporter of the series since its inception.

The first Brock Talks was given by Classics Professor Mike Carter on “The Gladiators’ Code: Life in the Roman Arena” in January 2012.

Since then, Brock Talks has featured a wide variety of speakers reflecting the broad field of study that makes up the humanities. Topics have ranged from theatre directing, to alcohol and the War of 1812, vampires and even video games.

Carter, now the Associate Dean of Research and Graduate Studies for the Faculty of Humanities, organizes the lecture series in collaboration with the St. Catharines Public Library.

“It is envisioned as a forum for interaction between Brock Humanities scholars and the local public,” says Carter. “Brock Humanities faculty have an opportunity to disseminate our research to a general audience and showcase what we do in the Humanities at Brock.”

There are six Brock Talks scheduled each year, all following a similar format: a roughly 40-minute talk followed by a discussion period where the public can ask questions and engage with the topic. The event is always free, and many are now shared online via live tweeting with the hashtag #BrockTalks.

“It is always a really interesting time and the audience, which is quite mixed, brings a lively discussion afterwards,” says Carter.

The next Brock Talks will feature professor Carrie Murray speaking on “Female Votive Figurines: Religious Worship in the Ancient Mediterranean.” Murray is an archaeologist with the Department of Classics.