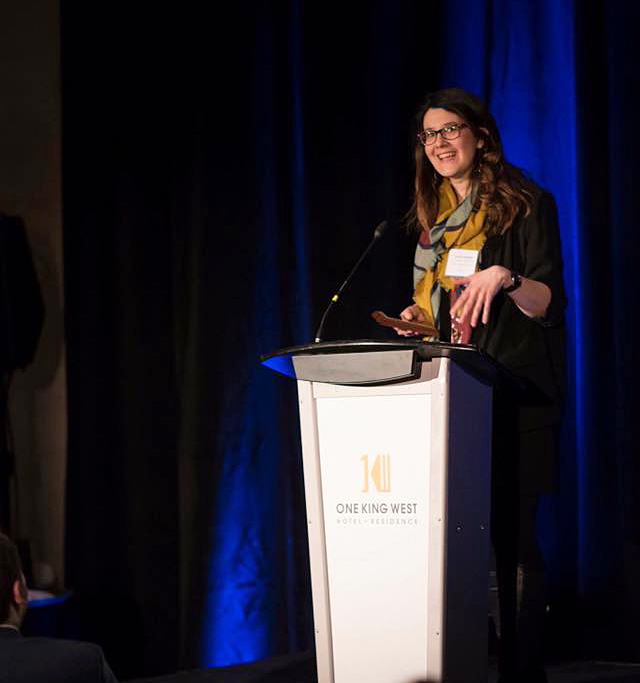 Ebru Ustundag, Associate Professor in the Department of Geography and Tourism Studies, received a teaching award earlier this year in recognition of her efforts in and outside the classroom.

Ebru Ustundag thought becoming a professor would allow her to teach students. But in her 11 years at Brock University, she has found it’s the students who teach her.

Ustundag, Associate Professor and Graduate Program Director in the Department of Geography and Tourism Studies, believes in teaching as a political tool as well as the concept of the classroom being a contested space.

She is grateful to have and use the space, and to both learn from and challenge her students.

Challenge takes many forms, from asking students to create their own assignments to inviting them to build curriculum with her; integrating feminist and racialized geographies and asking students to determine what is missing from the course outline.

In her graduate seminars, Ustundag sometimes develops 20 weeks of content for a 12-week semester. She then works with the students to decide which topics will be included in this particular iteration of the course, based on the collective interests and priorities of the students.

She often emails undergraduate students ahead of the semester to ask what they’re most keen to learn about and encourages students to pursue research that matters to them in a form they can relate to. For example, she has suggested they create an episode of a podcast they like or pitch a show to Netflix on the issue they’ve studied.

Ustundag also encourages deep dives into course material. Fourth-year students write reaction papers in response to assigned readings, which they submit ahead of class. Ustundag returns the paper with feedback before the session takes place, so that when discussion starts, the students have already begun working through their ideas.

“It’s time-consuming,” Ustundag concedes. “But it creates a different relationship between myself and the students, and between the students and the material.”

Her students appreciate her passion, expertise and generosity.

“Ebru opened my eyes to a side of geography I didn’t even know existed, and ignited a passion in me that I never knew I had,” says Katelyn Pierce, a 24-year-old master’s student from Niagara Falls.

Pierce says that her experience with Ustundag directed her to graduate studies in geography.

“She miraculously maintains the perfect balance between a genius professor and a compassionate mentor, never talking down to you and truly valuing your ideas.”

“Ebru has a way of infusing humour and light while naming injustice in her academic environments. The way she teaches offers students an opportunity to think deeply and critically in an environment that allows the chance to ask questions and open curiosities that may not have otherwise been accepted in a university setting.”

Other students agree — including the anonymous students who nominated Ustundag for an Ontario Undergraduate Students Alliance (OUSA) Teaching Excellence Award, which she received last March.

The OUSA Teaching Excellence Award recognizes educators who excel at unlocking the potential of Ontario’s young people. On the OUSA blog, a tribute to Ustundag cites her ability to inspire students: One of her students described their experience with her as, “the ignition of a fire within me and my peers; she gave us the courage and the tools to make positive change in our world.”

Ustundag, who is also affiliated with the MA in Social Justice and Equity Studies, was touched by the OUSA award, as it represents the connections she seeks to build with students.

“I am determined to have a community in my classroom, and I believe we can create change if we trust each other,” she says. “I want to focus on engaging with different stories to show how we make sense of the world.”