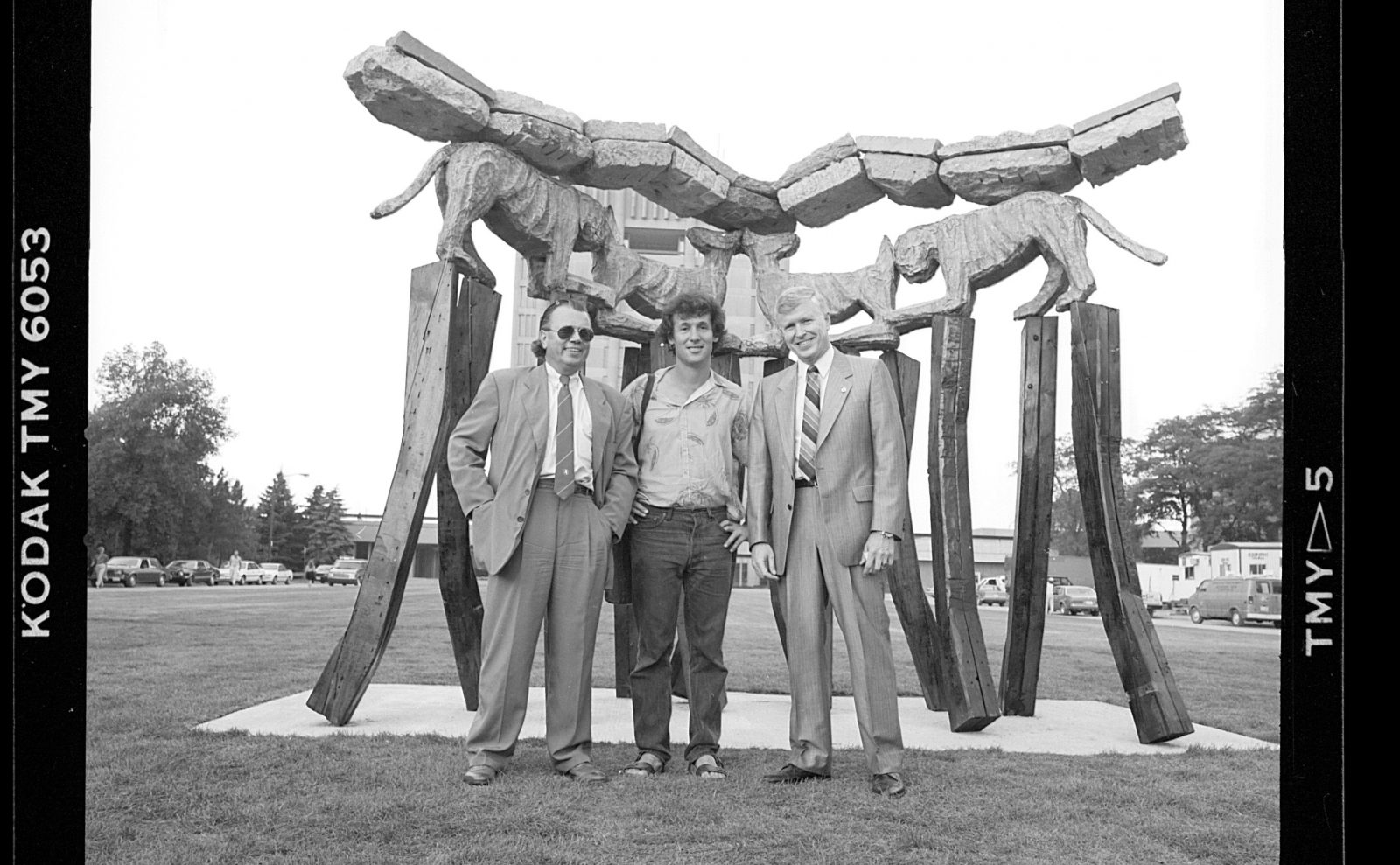 Lutz Teutloff, left, with sculptor Ilan Averbuch and Brock President Terry White on campus in 1990 after the installation of Averbuch's sculpture, Path of Possibilities.

Terry White, Brock University’s President from 1988-96, recalls his chance meeting nearly 30 years ago with Lutz Teutloff, the German art collector and philanthropist who died this past summer. That conversation would have a huge impact on the aesthetic development of Brock’s campus.

I joined Brock University in 1988, and in my early meetings with community leaders that summer I stated that one of my objectives was to maintain strong ties with St. Catharines, while also growing contacts with other communities in the Niagara Peninsula from Grimsby to Port Colborne to Niagara Falls to Niagara-on the-Lake. I invited them to share their ideas, suggestions and any individual contacts on how we might work to make this a reality, i.e., viewing Brock as Niagara’s university.

Wilbur Dyck, then Lord Mayor of Niagara-on-the-Lake, was hosting a function in August and introduced me to someone he thought I might want to meet — Lutz Teutloff. We had a very interesting and animated conversation, during which I learned that he was an international art dealer based in Germany with galleries at various times in Berlin, Cologne, Bielefeld, Tel Aviv and New York. His interest in Niagara-on-the-Lake at the time was as a developer of commercial and residential property. When he learned that I was the new President at Brock, he admitted he didn’t know much about the University, but was very keen when I invited him to join me on the coming Sunday for breakfast and a campus tour.

It was a beautiful Niagara morning for our rendezvous as we walked the campus from one end to the other and viewed the interiors of our buildings. He was highly impressed with the beauty of the site, the Escarpment, manicured lawns and wetlands, trees and flower beds, the architecture, and the already extensive programs and activities offered at Brock.

We talked about the potential of Brock to be an important element in Niagara, as a centre for learning, innovative research and creative activities, as well as an economic hub in an area that was struggling with layoffs and closures. 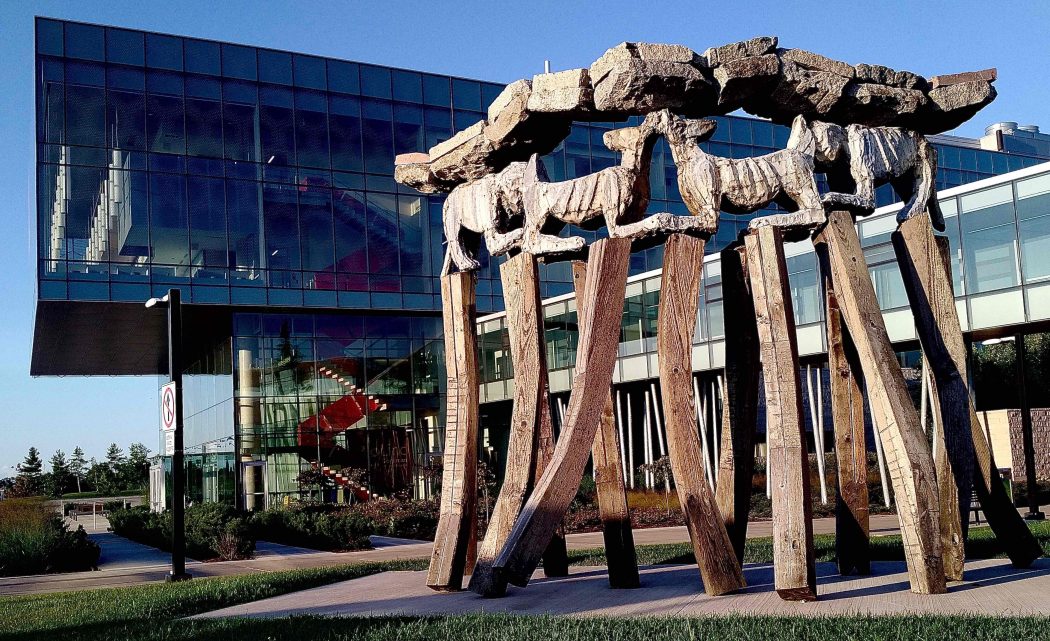 Lutz was swept up in the brainstorming and observed, “Your campus is beautiful, but you don’t have any sculpture!”  Ah, I thought, this could be an important moment for Brock. I replied to him, “You are correct Lutz, as a young university we don’t have any sculpture or public art, BUT, I know someone who could do something about that.”

We both judged the morning to be an enjoyable, stimulating time together and committed to being in touch again, before long.

We did keep in touch. Lutz had engaging thoughts that he kindly shared on a number of matters.  He was particularly keen on the work of a young Israeli sculptor, Ilan Averbach. He shared photographs of his bold creations and suggested Brock would be an excellent setting for Averbach’s “Path of Possibilities,” which Lutz owned.  Is there a better statement of what Brock in its work could offer its students and faculty than “Path of Possibilities”?

As we advanced our thinking, it was apparent that we needed to establish policies for art selection; site location on campus; transportation and installation strategies for such heavy objects; maintenance across a variety of weather, materials and other variables; insurance; security; interpretation to assist viewers; and a host of other logistics that each arrival would entail if we ever were to have more than a single creative work.

As a first step, we created a President’s Fine Arts Committee to make recommendations on artwork selection, e.g., to determine if an artwork would be a good fit for Brock’s campus. The composition of the Committee included a representative from the Fine Arts Department (usually as Chair of the Committee), faculty, staff and students.  Of course, their first assignment was, would they recommend that Brock welcome the loan of “Path of Possibilities” to our campus?

After campus-wide consultations and Committee deliberations, they unanimously recommended that “The Path of Possibilities” be situated at Brock. I immediately contacted Lutz to share the news of the recommendation, and to confirm that he was ready to commence this partnership with the University.  We both were very happy with his confirmation. The relocation work could begin.

Bringing such a large sculpture from abroad to our campus involved many complexities, as one can imagine. Fortunately, Vice-President Terry Varcoe was an exceptional problem solver, one of the best I had seen in my university career. He and his group in Physical Plant (Director Bill Armstrong and Mike Little), along with others from various administrative departments, teamed up to make this project happen, on top of all their other ongoing work.

In the meantime, I kept the Teutloffs informed about progress. Hannelore Teutloff is a very talented individual, highly knowledgeable in artistic matters.  She and Lutz were a dynamic team, bouncing ideas off each other and making good things happen. Consultations during the project also included the sculptor Ilan Averbach. 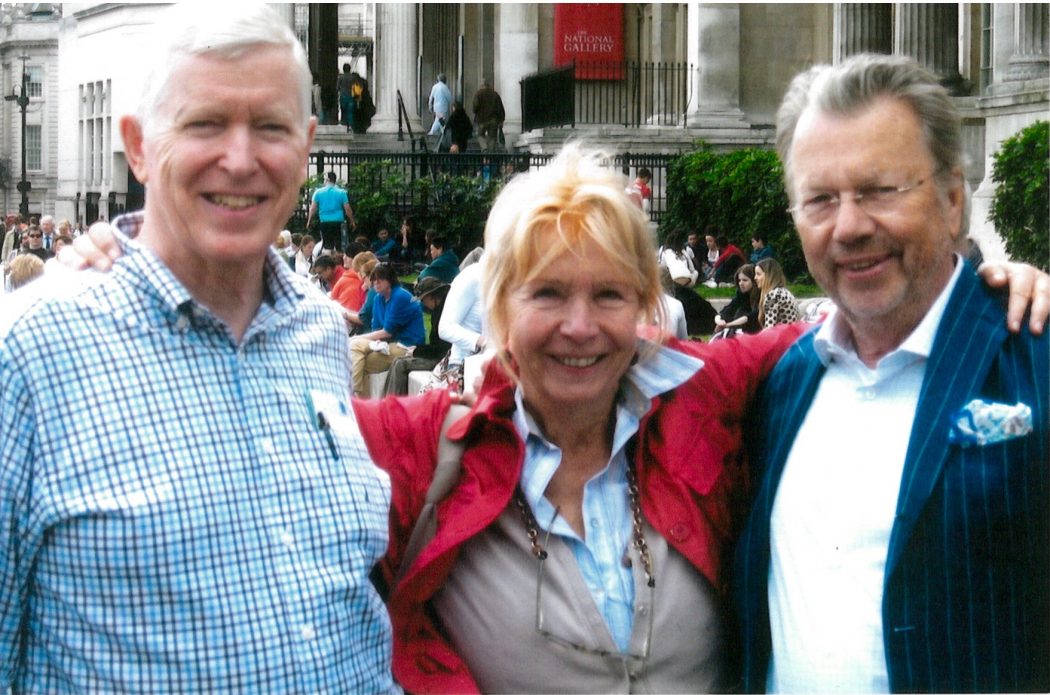 Terry White, left, with Hannelore and Lutz Teutloff in an undated photo in London, U.K.

Great universities have stimulating and challenging environments. Of course, this is a basic requirement in their teaching/learning and research and creative activities, but also in their culture and surroundings. Brock in its early years had done an excellent job in building the fundamentals in teaching/learning, and research and creative activities. Even with limited funding, it had made good strides with its fine arts presentations in the Centre for the Arts and its speakers’ program. “The Path of Possibilities” would be an important step in enhancing its cultural richness.

Over the next months, there was much activity involving the Brock team and Lutz and the sculptor Ilan. When finally the concrete was being poured for the sculpture’s base pad, on the grassy quadrant in front of the Schmon Tower, it was exciting, but gave no indication of all the efforts and initiatives that had preceded that moment.

The many pieces of the disassembled sculpture, wood and stone, etc. were next to arrive. The scene reminded me of a family Christmas setting, with Ilan Averbuch playing the part of the parent ready to assemble for the child a huge, complex train set or doll house. As the sculpture emerged from the reconstruction of the components, its beauty and size were striking and impressive. Its presence had an immediate visual impact on the hub of our campus.

It didn’t take long for the news to spread, across campus and around Niagara. For many, “The Path of Possibilities” was a hit.  For others, there was a period of contemplation required to adjust to the newcomer on campus.

To repeat an earlier observation in this report, “Great universities have stimulating and challenging environments.” As expected, fine art can be a great catalyst for discussions, opinions and even controversy. Brock was abuzz with “The Path of Possibilities.”

Lutz and Hannelore were interested and delighted with my reports on the reception the sculpture was receiving. They also were very complimentary on the professionalism and skill of Brock’s Physical Plant people and others involved in the shipping and installation. Before long, Lutz was suggesting other sculptures that we might be interested in.

Over the next several years, the roster of the Teutloff Collection at Brock grew; Lutz saw Brock as a beautiful and safe location for his treasures. “The Gate” was a simple but substantial and impressive piece at the front doorstep of the campus. “Bleeding Harp” led the way as the first interior installation, and attracted attention and commentary from patrons of events in the Performing Arts Centre lobby.

The collection grew, the sculptures serving as exclamation marks on the campus where members of the Brock community and visitors could enjoy, learn, discover, react, discuss and contemplate. Certain pieces truly were like exclamation marks. For instance, “She Wolf” was disliked by some feminists, but was highly popular with the students. They seemed to see something in it that they liked.

Lutz visited from time to time, and during one of our walk-abouts he suggested that we should think about a “sculpture park.” We could make the collection more widely known as an attraction, a place where visitors to Niagara could come and enjoy the sculptures in their beautiful setting on our campus on the Escarpment. Also, in my mind, not only would it create a better awareness and appreciation of Brock University, but it might plant seeds in the minds of potential students about a very attractive option for their post-secondary educations.

Professor Derek Knight was an important link in the process with the Teutloffs. He had talked with them, met the sculptors and had ideas on the Sculpture Park notion and interpretation strategies that would assist in the learning and viewing pleasure of the Brock community, as well as campus visitors. A brief brochure was prepared showing the location of the sculptures on the campus (in the “Park”). It wasn’t long until tourists and other visitors began discovering Brock’s beautiful campus and the sculptures.

I recall a meeting of the Council of Ontario Universities (COU) that we hosted. For many of the presidents in attendance it was their first time at Brock. A number of them took me aside and shared their compliments on what they were witnessing. They were impressed with what they were learning about our academic programs, the research and creative activities, and the beauty of the campus and our facilities. They liked the “feel” of Brock and were surprised that it had a maturity to it that they hadn’t expected in a younger university. And, of course, the Teutloff Collection was an unanticipated bonus.

When I left Brock in 1996, Sue and I took a quiet walk around the campus where the Teutloff Collection had grown to a significant number. At every turn, we could remember the people who made an impact on Brock during our time there.  There were memories of the strong performances of our committed faculty; the caring and creative efforts of our staff; and, of course, the variety and boundless talents, energy and enthusiasm of our students in their studies and extracurricular activities. Also, it was particularly gratifying to think about the support and encouragement of numerous donors, politicians, media and a network of many people and institutions. Altogether, they saw something special in Brock that resonated with them, and they joined together to help it along.

This aide-memoir provides a vignette of two special people, Lutz and Hannelore Teutloff, who through their passion for art, have made a memorable contribution to Brock University. Thank you.