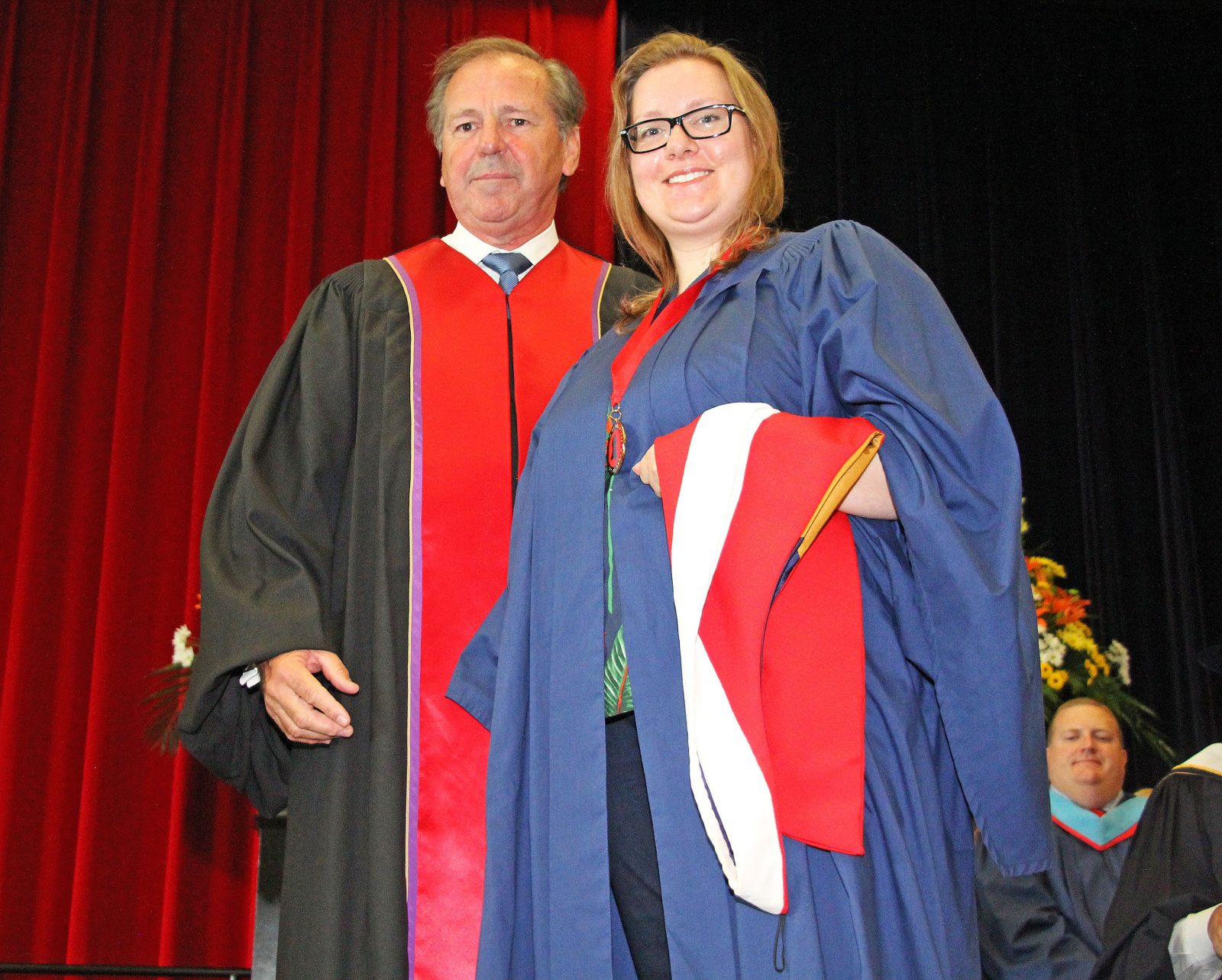 Michelle Balge, who completed an honours degree in Sociology with a concentration in Critical Animal Studies, was the undergraduate recipient of the Board of Trustees Spirit of Brock Medal presented at Fall Convocation by past Board of Trustees Chair John Suk on Friday, Oct. 13.

Sarah Bax and Michelle Balge have exemplified what it means to be student leaders — both inside and outside of the classroom.

They were each honoured for their efforts during Friday’s Fall Convocation ceremonies — Blage in the morning and Bax in the afternoon — and recognized with Brock’s Board of Trustees Spirit of Brock Medal.

The award is presented to one undergraduate and one graduate student who best exemplify the spirit of the school’s namesake, Maj.-Gen. Sir Isaac Brock and show traits such as courage, innovation, leadership, inspiration and community involvement. 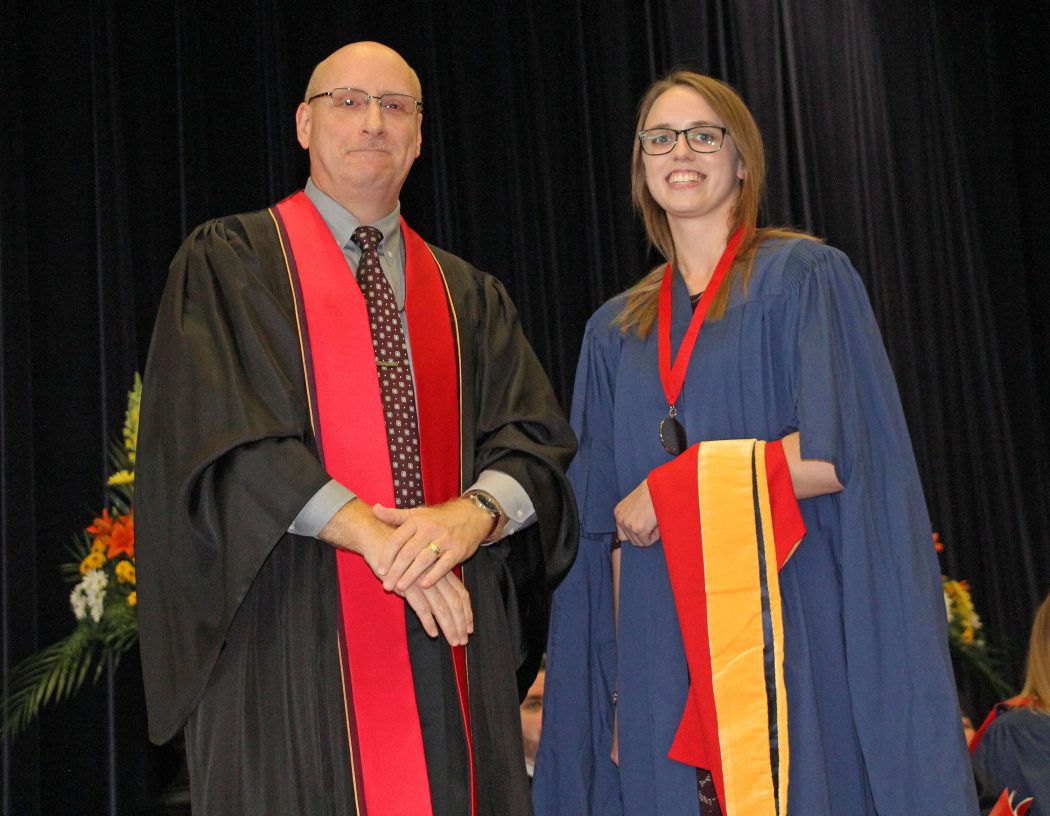 Sarah Bax, who received her master’s in mathematics Friday afternoon, was presented with the Board of Trustees Spirit of Brock Medal by John Zoccoli during the Fall Convocation ceremony Friday afternoon.

This fall’s honorees were both active student leaders who found that embracing extracurricular activities and finding ways to help others shaped their experiences at Brock.

It was through assisting others that Michelle Balge, who completed an honours degree in Sociology with a concentration in Critical Animal Studies, found personal fulfillment.

Her journey to convocation included a courageous decision to leave school for a year to take care of her own mental health. When she returned to Brock, she divided her attention between her studies and finding ways to help others who might be struggling with mental health concerns.

“Perhaps the most positive aspect of my experience at Brock was with Active Minds,” Balge said. “I made new friends and found I could help people through my knowledge, experience and volunteering.”

The 26-year-old Georgetown, Ont., native became an award-winning leader in Active Minds, an organization dedicated to raising awareness of mental health and suicide among college and university students. She developed handouts, videos and websites, and devoted countless hours to organizing student events to inspire and support her peers.

Upon leaving Brock, Balge will continue to share her experiences and insights with others, both through speaking engagements and in a memoir that will be released in February of 2018.

“This memoir bares all of me, so it’s both terrifying and exciting,” she said. “What I want people to get out of it is hope — to know that you’re not alone and that there is a light at the end of the tunnel.

“I just want to be able to help people and make a difference in the world.”

It wasn’t until her second year of University that Sarah Bax, who received her master’s degree in mathematics Friday afternoon, realized the importance of getting involved, both on campus and in the community.

“As time passed, I started to join more activities and volunteer at different events with the mind set, ‘if I don’t, who will?’” she said. “This thought held me accountable for my actions and inspired me to accept any challenge that came my way, leading to my involvement in many activities.”

The 24-year-old Paris, Ont., native honed her leadership skills as a teaching assistant and worked to deliver material in a creative way that encouraged students to “leave lab having enjoyed their time and with a newfound confidence in their abilities,” she said.

Her passion for numbers made her a favourite at Brock’s Math Camp, where she spent four summers organizing events and teaching courses that break down complex concepts in a way students can easily understand. She also teaches at Spirit of Math, a system of after-school math classes for high-performing and gifted young students.

Bax has spent time volunteering with SNAP, a special needs activity program aimed at assisting Niagara children and youth with disabilities, and more recently joined Big Brothers Big Sisters of Canada, where she has become a mentor to a young girl.