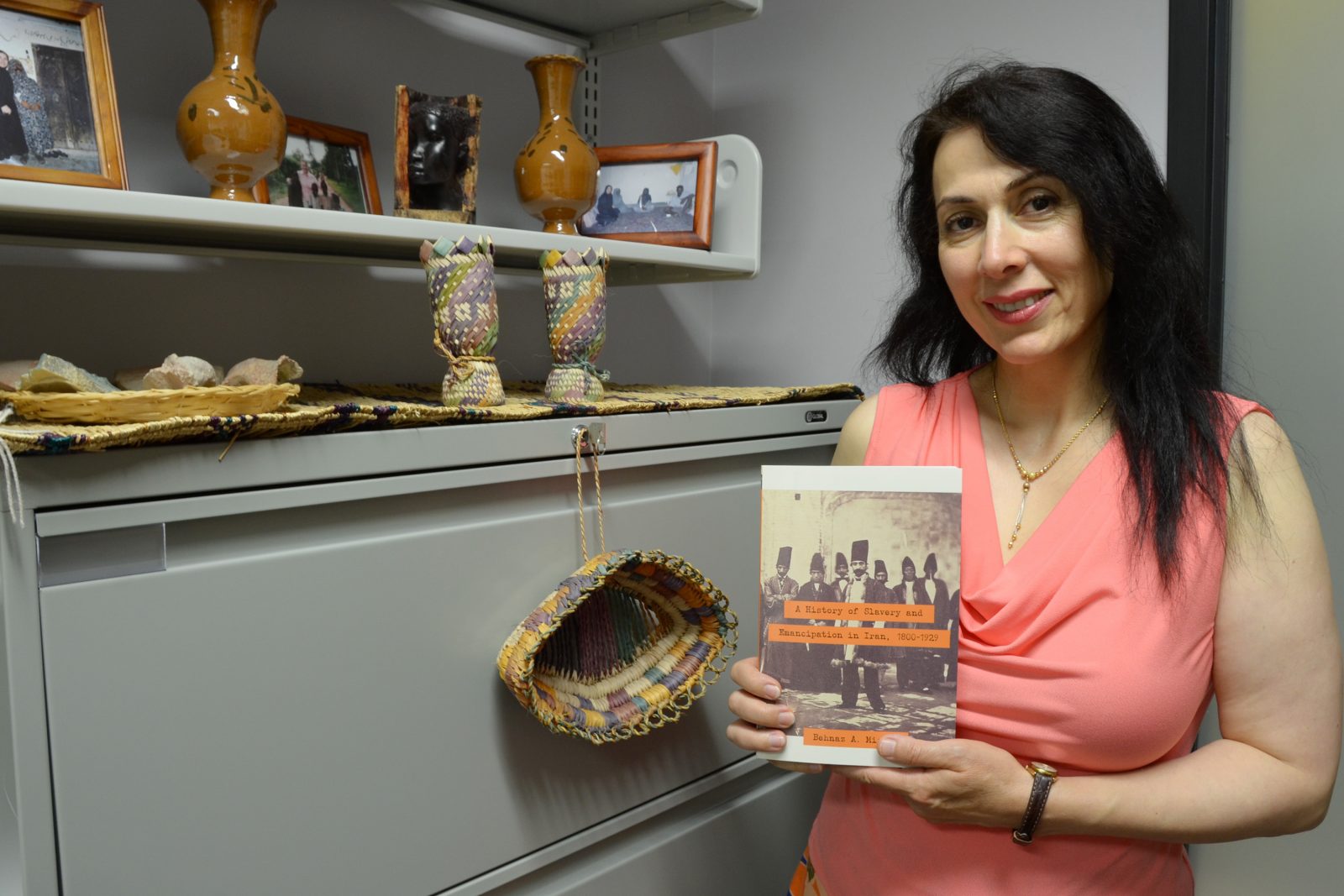 Behnaz Mirzai, associate professor in the Department of History.

It was a haunting plea from the past, a cry for freedom leaping off the pages of a letter written more than a century ago.

To Behnaz Mirzai, this note and others like it gave life to the injustices she was researching for her now-published book A History of Slavery and Emancipation in Iran, 1800-1929.

“I found letters written by slaves themselves asking ‘now that we have the constitutional system and there is a move for equality in our country, why should we remain as slaves?’” says Mirzai, associate professor in the Department of History.

Those letters referred to Iran’s Constitutional Revolution of 1905-1911, which saw the formation of a Parliament and legislation to address corruption, misuse of power and economic instability, among other issues.

Slavery was officially abolished during that time, although it took a while for it to be fully implemented.

In her book, Mirzai stretches back to the 1500s as she sets the scene for documenting the development of patterns of slavery across Iran, beginning with the arrival of the Portuguese to the Persian Gulf in 1507, followed by the British and Dutch.

By the early 1800s, the Russians, British, Turcomans and Omanis were vying for resources in the area and access to routes in the Caspian Sea, the Persian Gulf and the Gulf of Oman.

Throughout that century military attacks, insecurity along the country’s borders, political instability within the country and economic volatility were some of the forces that shaped Iran’s various slavery patterns.

Slaves were imported to Iran from the East African coast including Zanzibar, Mombasa and Somalia, and inland from Ethiopia and Sudan.

But, surprising to Mirzai, Iranians themselves were also enslaved.

Mirzai argues there were important differences between slavery in Iran and what occurred in North America during the same time period.

“If a slave was mistreated, according to Islamic law, they must be liberated by their master. You were not allowed to mistreat your slave,” she says.

“It was not as harsh as what we saw in North America. Also, the whole concept of slavery and race were not equal in the sense that many non-Black Iranians were also enslaved.”

A History of Slavery and Emancipation in Iran, 1800-1929 was a profound journey for Mirzai, who moved to Canada from Iran in 1997. During her PhD studies at York University, she was part of a research team that focused on African slavery.

“I wanted to link what I was learning to Iran,” Mirzai says. “I started searching the archives in Iran and I found that, yes, we also had slavery.”

Finding out more about that aspect of Iran’s history became an intense passion for Mirzai. She scoured archives in Britain, France and other parts of the world as part of the thesis she completed in 2004.

Wishing to expand her thesis, Mirzai travelled to Zanzibar, adding chapters that were to form A History of Slavery and Emancipation in Iran, 1800-1929.

The book’s research was a long and challenging process, as she was charting a new path.

“So far, no literature has been published on African and Indigenous slavery in Iran; my reference was the literature about the Ottoman Empire. There are books on the abolitionist movement in the Ottoman Empire, but nothing on Iran, so this is the first, groundbreaking book on the subject,” says Mirzai.

During those research years, she produced two documentaries, Afro-Iranian Lives, and The African-Baluchi Trance Dance.

Mirzai had many learning points along the way and is especially fascinated by the African origins of many contemporary Iranian cultural practices.