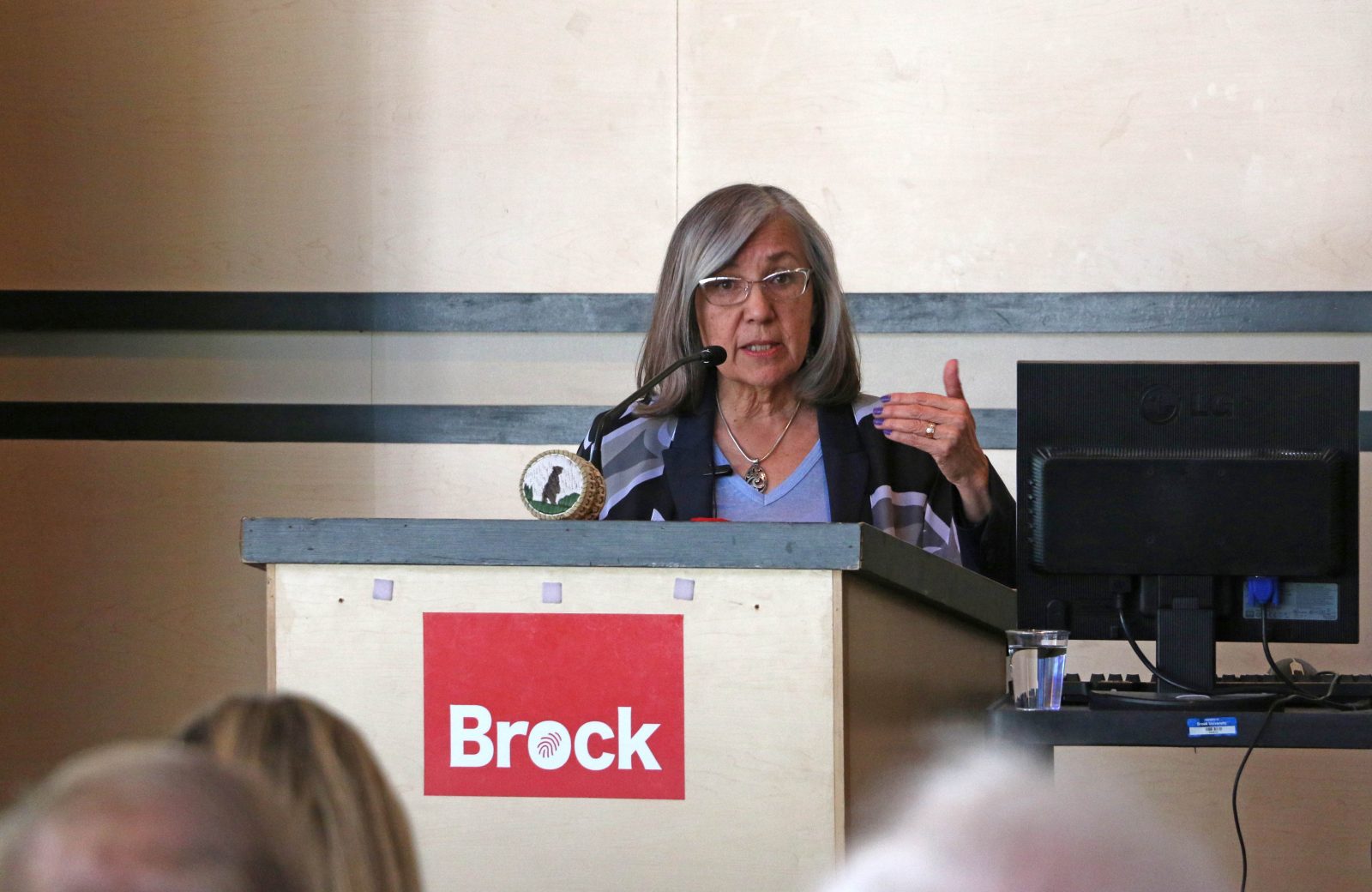 Marie Battiste, of the University of Saskatchewan, speaks about ‘Indigenizing the Academy’ during a presentation at Brock’s Pond Inlet on Monday, April 24.

Challenges and opportunities Brock may encounter as the University works to expand and improve supports for its indigenous community were highlighted during a recent presentation at Pond Inlet.

Professor Marie Battiste, of the Department of Educational Foundations at the University of Saskatchewan, took to the podium on Monday, April 24 to share her thoughts on the notion of ‘Indigenizing the Academy’ — a concept that urges universities to undergo a process of institutional decolonization, working to weave indigenous people, cultures and knowledge into the fabric of their campuses.

Battiste, a respected indigenous scholar and author, was asked to provide guidance as Brock works to implement recommendations within the Indigenous Education Advisory Committee Report, accepted by Senate in 2016.

Known for her work in indigenous education and decolonizing pedagogies, Battiste shared her insight into the process with a crowd filled with members of Senate and the Board of Trustees, Brock’s Aboriginal Education Council and Aboriginal Services, as well as students, staff and faculty.

While her presentation touched on many aspects of indigenous education, her main message was simple: Brock needs to be constantly engaging its indigenous community moving forward.

It was a notion that solidified for Senate Chair Scott Henderson that Brock is moving in the right direction.

The University has been working in recent months to develop a Two Row Council that will help ensure the advisory committee’s report recommendations are properly implemented.

The council, expected to be before Senate for approval in the near future, will include various members of the indigenous community, as well as indigenous and non-indigenous co-chairs.

“We didn’t want Senate committees that are largely non-indigenous to make decisions on these issues, whether it’s increasing the amount of indigenous art on campus or deciding how to introduce more indigenous knowledge into the curriculum,” Henderson said.

“We really want to hear the voices of the indigenous community.”

Henderson stressed the University wants to keep those lines of communication open throughout each step of the process.

“We don’t want to fall into a trap of trying to enforce solutions, upsetting communities rather than supporting communities. That’s critical,” he said.

Battiste emphasized the importance of institutions recognizing the Eurocentrism of the system in which they operate — a notion that resonated with Henderson.

“We forget that universities themselves are very Eurocentric in terms of our hierarchy, what we accept as knowledge, the kinds of credentials we expect people to have when we assess them for teaching jobs and other roles in the University,” he said.

“We perhaps neglect indigenous knowledge,” he said, adding work is being done to eliminate that suppression and to see transformation from within the institution.