Aboriginal Awards recognize inspiring achievement on campus and beyond 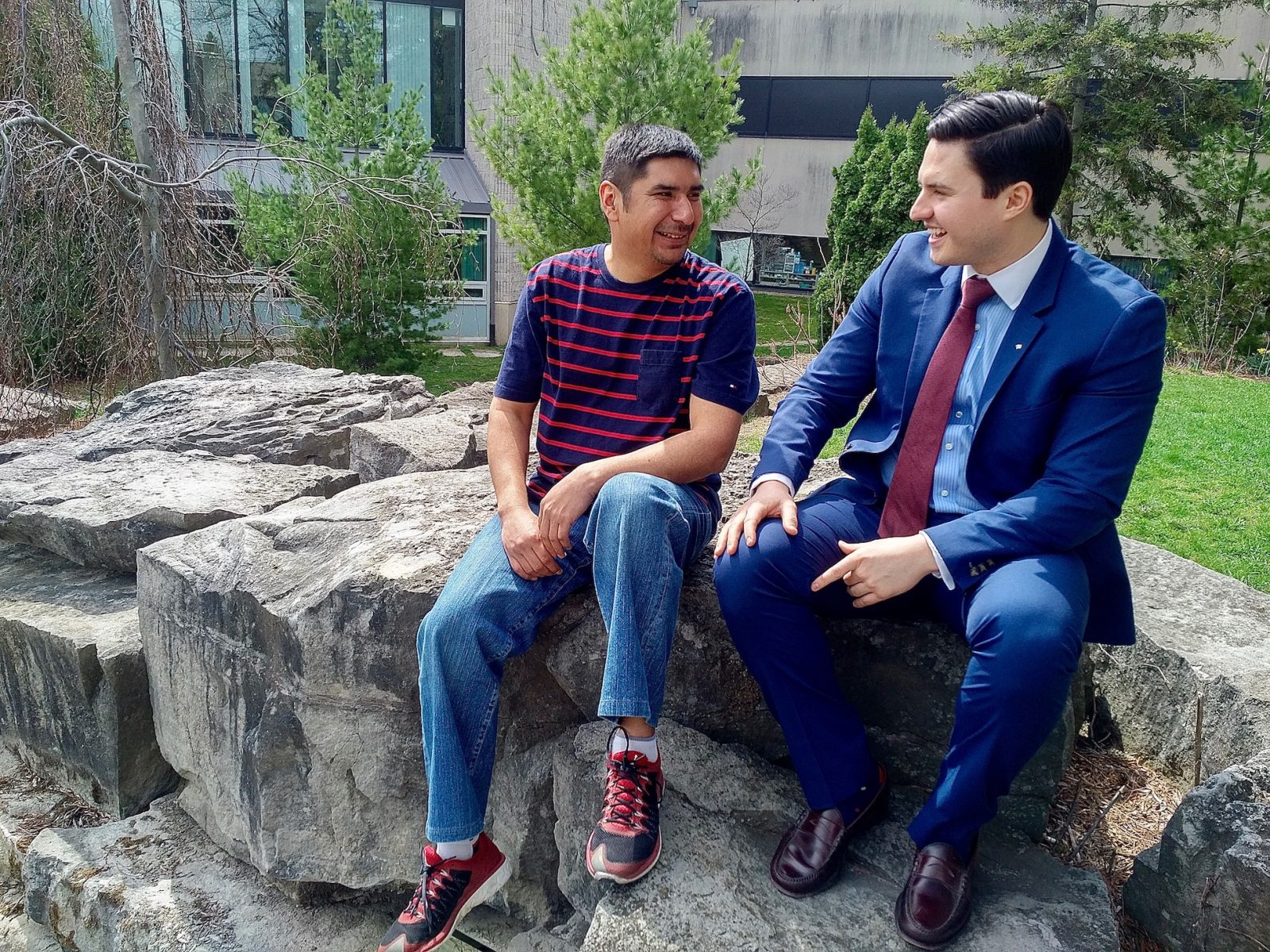 When he was growing up, Darcy Belanger loved sports but not school. Dropping out of Grade 9 to work in construction, he fell into a dark spiral of addiction, lost jobs and hopelessness. Then some fateful encounters pulled him back from the brink, and today the Brock student works to help others do the same.

Chip McCrimmon doesn’t hesitate when asked about his plan for the future: Graduate from Brock next spring; succeed in a lucrative career; then spend his money helping others, especially the Indigenous community. Then, for good measure, seek political office so he can find new ways to improve peoples’ lives.

Belanger and McCrimmon are the 2017 winners of the Aboriginal Achievement Award, presented by Brock’s Student Success Centre and Aboriginal Student Services to honour high-level achievers in their studies and in their off-campus lives. 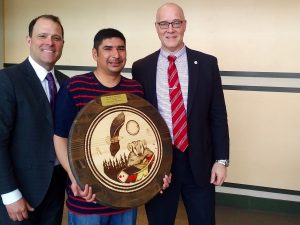 Darcy Belanger with St. Catharines Mayor Walter Sendzik, left, and Brock Vice-President of Administration Brian Hutchings. In his road to rehabilitation, Belanger has worked with and been supported by the City.

A decade ago, Belanger was hitting a rock bottom that few could imagine. He was homeless, alcoholic, addicted to drugs, out of jail and living from meal to meal at the Southridge Church men’s shelter, just up Glenridge Avenue from the Brock campus. He calls that blurry chapter “survival mode.”

But he clung to a hope of reclaiming his life, and people around him helped. Slowly he kicked drugs, then the booze. He took an interest in his Southridge colleagues, began organizing sports or other activities for fellow shelter residents.

He had also diligently completed his high school diploma, and one day someone told him about Brock’s Aboriginal Adult Education program. Belanger warily applied for the course and passed. Then, encouraged by those who believed in him, Belanger did something beyond his wildest dreams: he enrolled in a university degree program. Today he is a year away from crossing the stage at Convocation with his Bachelor of Education.

Belanger became “a true leader and mentor,” said Brian Hutchings, Brock University’s Vice-President of Administration, who became a supporter of Belanger after hearing him speak to a group at Southridge.

Life has gone from empty to overflowing. When he’s not studying or organizing rock-climbing or camping activities for the Southridge group, Belanger might be coaching his boys’ ball hockey team or volunteering at the Niagara Regional Native Centre. He has also teamed with City of St. Catharines staff to reopen the Abbey House Aboriginal women’s shelter.

His ultimate goal is to raise enough money to create a homeless shelter in Niagara for Indigenous men battling substance or mental health issues.

“This all happened because I was around people who convinced me about what I could become,” said Belanger, an Ojibway originally from Manitoba.

“People have helped me become a better person, and I want to do the same for others.  I have some big dreams for the future and for the community, and I hope to collaborate with people to achieve those goals.” 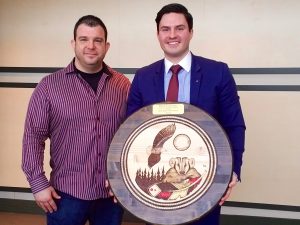 McCrimmon, a member of the Deninu K’ue First Nation from the Northwest Territories, was a lacrosse player whose skills led him to attend high school in Indiana. Upon graduation there were offers from U.S. universities, but he wanted to come home to Canada, and chose Brock after a meeting with Sandra Wong, the University’s Aboriginal Academic Support Program Coordinator. (“She was the biggest factor, she made me feel very welcome.”)

During his time at Brock, the 23-year-old has had to overcome his own personal demons, and is now committed to being a role model for Indigenous youth. He takes pride in being a varsity athlete who made it to two national semi-finals, and he has also applied himself academically, supported by his Political Science instructor Jason Sykes. McCrimmon has become heavily involved with student clubs, volunteered extensively on and off campus and worked in Aboriginal Student Services as a peer mentor encouraging other students.

“Chip succeeded in getting people to not just hear, but to listen,” said Wong at this week’s emotional awards ceremony.

He also finds time to be a gifted artist through his company Intricate Burns, and is currently working with a partner to launch an apparel company that will encourage mental health through better physical fitness.

McCrimmon is disarmingly pragmatic about his determination to be financially successful. He says he doesn’t covet wealth for himself, but knows he needs money in order to have maximum impact helping others. It’s part of the plan.

“I know that I’m going to be successful in whatever I do,” he says with polite confidence, “and I need to do good things with that success. I want to be a philanthropist who helps my people, I want to create a scholarship here at Brock, I want to set an example.

“I want to be the face that people see and say, ‘Hey, you can do anything you want in life, you just have to work hard and go get it’.”