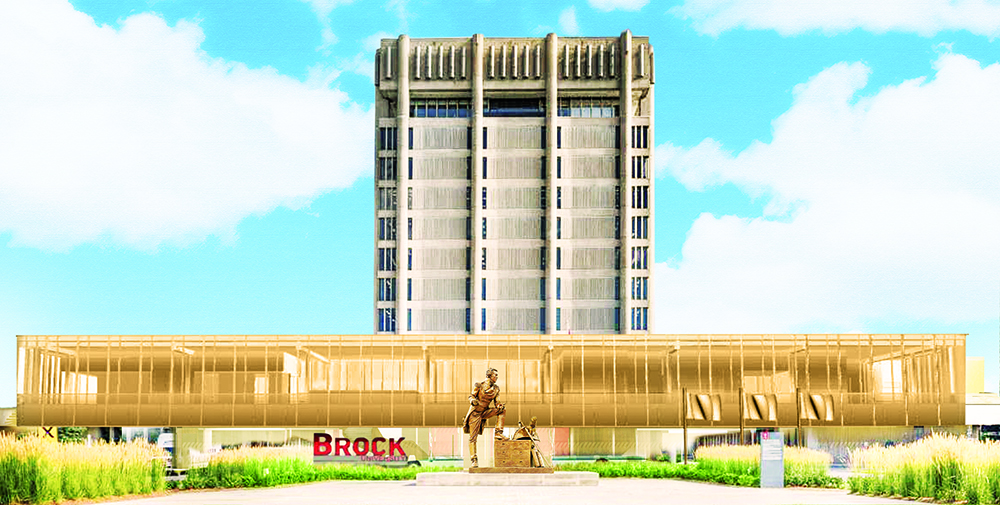 An artist rendering of the new front entrance being built as part of the Brock LINC project.

Two major projects are set to move forward that will give the Brock University campus a signature front entrance, as well as a more efficient and eco-friendly power system.

At its last meeting Thursday, March 9, the Brock Board of Trustees was given an update on the two projects and voted on awarded the construction contract that moves the project forward.

While the Brock LINC project will see a major facelift in the outdoor space in front of Schmon Tower, the District Energy Efficiency Project (DEEP) will, as the name suggests, provide significant upgrades deep in the heart of the University’s power system.

Funded in part by the Government of Canada’s Post-Secondary Institutions Strategic Investment Fund (SIF), the Brock LINC project will be a two-storey innovation complex in the space directly in front of the Schmon Tower. The lower level will become an enclosed atrium with collaborative and digital innovation space such as the James A. Gibson Library’s Makerspace, while a second level will be added to the podium in front of the tower to house and expand commercialization activities currently undertaken by BioLinc and the Office of Research Services.

The Board awarded the contract to Ball Construction Limited, which will allow the project to move into the construction phase with a target date of April 30, 2018 for substantial completion.

Joffre Mercier, Interim Vice-President Research, said the Brock LINC will be an important step forward for students and faculty, as well as the wider Niagara community, for which the space is being tailored.

“We have been assisting our faculty members and our students with research and innovation through ORS and BioLinc. We want to combine all of that and expand on it. We want to do more because of the importance of driving industrial development and social innovation,” he said.

Project Manager Scott Roper said the project also “rebrands the University with a new front door and a welcoming façade.”

Roper said the new main entrance will complete what was started with the delivery of the Maj.-Gen. Sir Isaac Brock statue two years ago.

“That was the first step in making a ceremonial centre to the campus. This project will extend the values that the bronze General Brock statue represents to the physical building,” he said.

Though not as high profile in terms of visibility, awarding the construction contract for the DEEP project was also approved by the Board of Trustees last week and will now move toward an April, 2018 completion date.

The $11 million DEEP project is funded in part by the Government of Canada’s SIF and by the Province of Ontario and represents a significant upgrade to Brock’s cogeneration power plant.

Currently, natural gas powers eight engines which produce enough power to supply 85 per cent of the electricity required by the University. Producing power in-house is about three times cheaper that purchasing hydro off the grid.

As part of the new project, four of the eight engines, which were installed in 1993, will be replaced by two new engines capable of producing more power than the four they’re replacing. The new engines are also far more environmentally friendly.

“Not only does it reduce our greenhouse gases by 15 per cent, it reduces our operating costs because we’re reducing from eight engines to six, but getting more power out of it,” said Scott Johnstone, Interim Associate Vice-President, Facilities Management.

The DEEP project also includes funding to replace the pipes that have provided potable water to the entire campus since the University opened.

While the DEEP project will take place mostly out of sight of Brock staff and students, Roper said the community will have to exercise patience as the Brock LINC construction takes place in the busiest part of the campus.

“Construction is always a short period when compared to the benefits it provides us,” he said, adding that an initial meeting between the University and Ball Construction scheduled for this week will address how to mitigate the challenges that will come with getting around the work.

The Brock University Board of Trustees consists of 27 representatives from the Brock student body, faculty, staff and Niagara community. The Board meets five times each year and is responsible for the government, conduct, management and control of the University and of its property, revenues, expenditures, business and affairs.

In addition to the SIF project decisions, the Board also approved a number of new and updated policies; approved proposed tuition fees; approved the renaming of a room in the Cairns Family Health and Bioscience Research Complex; and received presentations regarding the Brock District Plan, Niagara 2041 and GO transit from the Niagara Region.

For a full summary of the Board of Trustees March 9, click here.