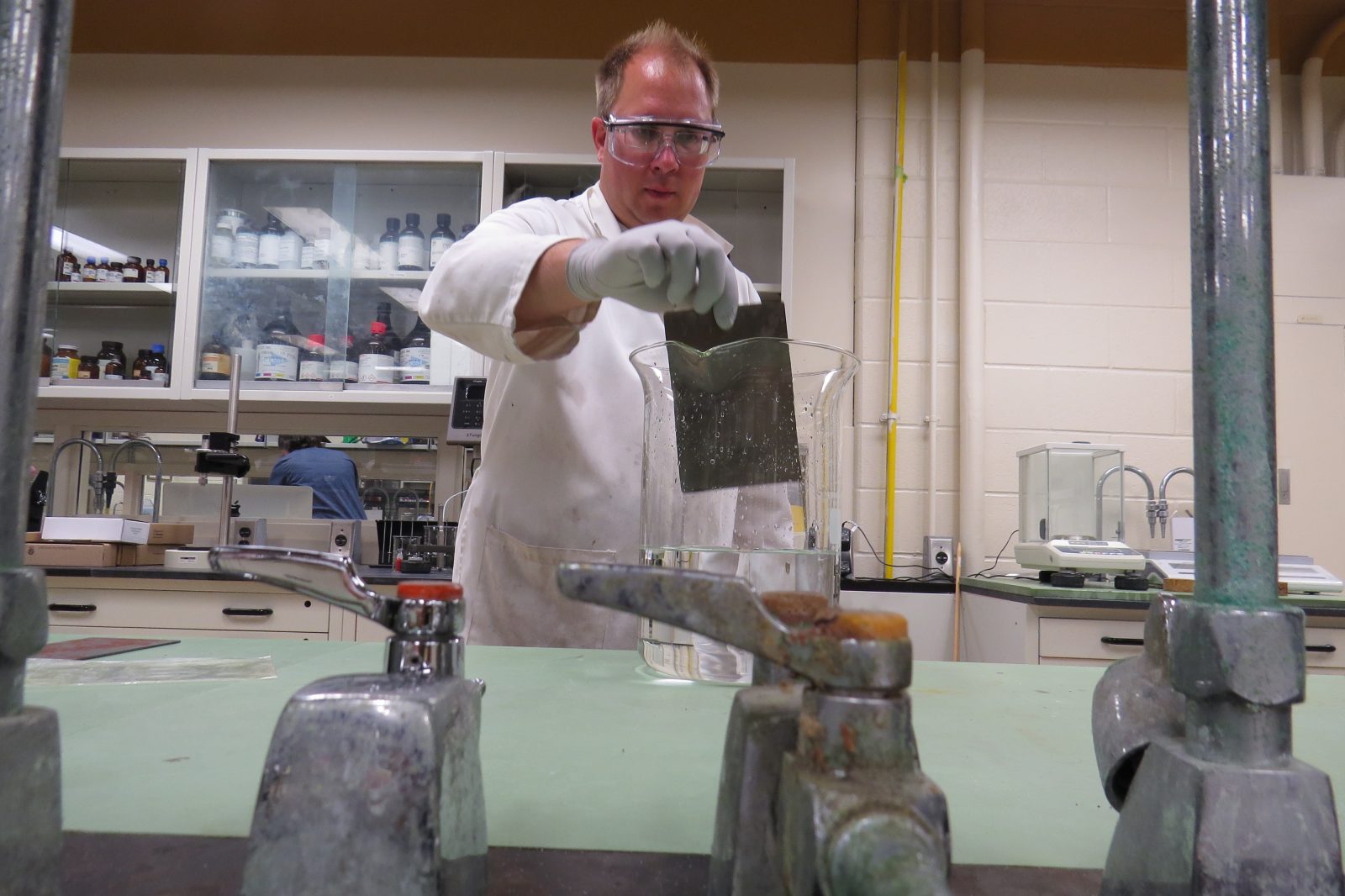 A Brock University chemist and a Burlington chemical company have patented a green coating system that protects metals against corrosion.

Organic chemistry instructor Paul Zelisko and Vanchem Performance Chemicals created technology they named Greencoat, which uses silicon rather than heavy metals to bind coatings to both metal surfaces and paint.

“It’s a water-based system that, for all intents and purposes, has reactive sand in it,” says Zelisko. “If the material happens to get flushed out or it leaks, you’re effectively releasing sand and water into the environment.”

Sheets made out of steel or other metals need to be ‘pre-treated’ with a substance that will guard them against damage caused by rust and salt. This substance must be able to stick not only to the metal but also to any paint that’s applied to the sheets on top of the coating.

Traditional coating systems use heavy metals – such as zinc phosphate, iron phosphate or chrome – to enable the inorganic and organic substances to be able to stick to one another. Phosphates released into the environment causes various algal blooms in lakes and rivers, damaging aquatic plant and animal life.

Also used in the process are solvents – substances used to dissolve other substances – that have in the past polluted the environment.

Unlike conventional methods, Zelisko and Vanchem’s system involves a two-step process. First, a base layer is applied to the metal. Water mixed with silica, which is basically sand, is sprayed onto the metal, creating a chemical bond with the metal. This cleans the metal but also deposits silica onto the surface.

This coating not only protects the metal but acts as a primer for the second layer, which is designed to bond well to paint.

The second layer contains polysilicates, the basis of which is silicon, “the second-most abundant element in the Earth’s crust,” says a company report. Silicates can be modified to stick to both metals and paints.

When the industry wants to determine whether or not a coating product is effective, the treated metal sheets are put into salt-spray chambers, where a fine mist of salt water is continually sprayed onto the metal until it starts to show signs of corrosion.

The industry standard is around one thousand hours, says Zelisko. “Our coatings ranged anywhere from 1,800 to 3,000 hours, in some cases almost three times as good as what the industry requires.”

When coming in contact with metal, salty water acts as a type of catalyst, enabling oxygen to mix with metal, resulting in corrosion.

The Brock-Vanchem innovation is a sign of the times, says Ian McLeod, vice president of Vanchem Performance Chemicals.

“The industry has switched over to greener technologies; they want to get rid of the heavy metals,” he says. “Large corporations and companies want to be environmental stewards. They want to be able to say, ‘look at what we’re doing, we’ve replaced the old zinc phosphate technology with a new silane-based technology that doesn’t have any environmental impacts.’”

McLeod says that the initial price of a ‘green’ coating may be more expensive than a zinc phosphate one. But, factoring in environmental disposal, maintenance and other costs associated with non-green coatings, companies could save money in the long run.

Working with a university to create this technology is very beneficial, says McLeod: “I don’t think we would be where we are today without Paul Zelisko’s expertise in his team.”

The Ontario Centres of Excellence supported the research partnership through its OCE Collaborative Research Program.

“This innovation is on track to demonstrate some real economic benefits for Ontario and is a great example of what can happen when academia and industry work together,” said Gillian Sheldon, OCE’s business development manager. “Ontario Centres of Excellence has a long history of supporting the automotive sector, and we are pleased to collaborate on this innovative cleantech solution.”

The team received the patent for Greencoat silane-based pretreatment on Aug. 2 in the United States, with Canadian and European patents pending.