An agent of change prepares for some of his own 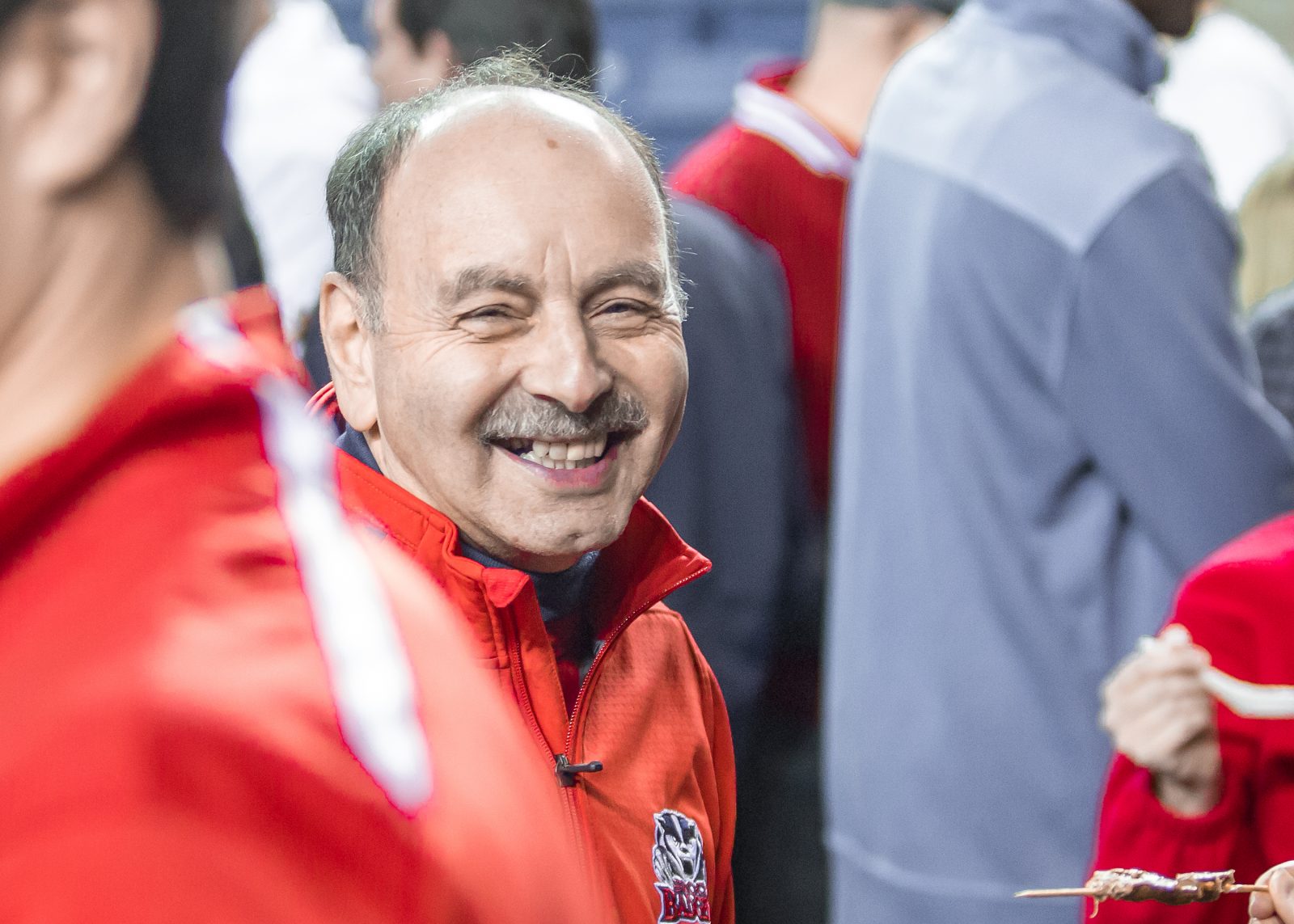 When Jack Lightstone showed up in 2006 as Brock’s new president, the University was starkly different from what he’s handing over today (June 30), as he leaves the corner office after a decade in the job.

Besides the remarkable expansion of the campus, he has grown the University’s research and teaching capacity, transformed its relationship with surrounding towns and cities, and broadened the role of President to one that includes being a proactive community partner.

Lightstone came here with eyes wide open. In his previous life as Provost at Montreal’s Concordia University, he had worked closely with the president on big files and tough issues. The top job is a full menu of demands, from happily conferring degrees on beaming graduates, to the pain of approving steps to erase a seven-figure budget deficit.

When all is said and done, some key metrics indicate how Brock transformed during Lightstone’s tenure. Consider:

When he first arrived, Lightstone spent time asking people on and off campus about their concerns and perceptions. Academics said Brock lacked the facilities needed to fulfill its mission as a research-intensive university, while out in the streets, Brock was often shrugged off as an aloof Ivory Tower, indifferent to its host communities.

There was a feeling that while Brock was in Niagara, it was not really involved in any serious ways in the life of Niagara.

Public sentiments about Brock were often weighted by the “nuisance factor” that comes with having university students living in residential neighbourhoods.

“There was a feeling that while Brock was in Niagara, it was not really involved in any serious ways in the life of Niagara,” Lightstone said recently. While that may have been “a gross exaggeration,” it was still a perception that needed to be addressed.

As for the campus community, back in ’06 the new President bluntly told the Board of Trustees and University Senate that Brock was headed for a cliff of structural deficit: The costs of running the place were higher than its revenues, a danger whose warning signs had been masked by several years of surplus from the enrolment double cohort.

Change was coming. Over the next decade, campus infrastructure would be radically updated and expanded, and Brock would become a more visible, proactive, outward-looking community partner.

Lightstone personally defined the evolution, visiting municipal council meetings and helping write economic development plans for the Niagara Region, which had been hit hard by the offshore flight of industry and manufacturing jobs.

He and his team sought out ways for Brock to become a constructive partner for the whole community. To help incubate new businesses, Brock rented space in struggling urban settings. Student and staff volunteerism increased. The Niagara Community Observatory was created to research issues that were very local.

As for physical growth, the list of major projects on Lightstone’s watch speaks for itself. The $120-million Cairns Family Health and Bioscience Research Complex attracts and retains leading researchers and strengthens Brock’s ability to draw graduate students. The $45-million Marilyn I. Walker School of Fine and Performing Arts is not just a triumph of teaching excellence but a coup of design and renaissance in downtown St. Catharines.

“The amount and nature and quality of space was the most burning issue that people brought to my attention,” Lightstone recalls.

“Brock had decided in 1999 to become much more involved in research and graduate studies, and had hired a number of new faculty with the expectation that they’d have significant research careers.

“Plus the school of fine and performing arts sorely lacked the type of purpose-built space that it needed for teaching.”

Desiring buildings is one thing; paying for them is another. Knowing that universities need support not just from the community but from government, Lightstone created a government relations staff to keep politicians and policy-makers apprised of the needs for, and community benefits of, these new facilities.

Lightstone acknowledges that the various initiatives were all pieces of a focused game plan supported and executed by many across the campus.

“When you look at that list, pretty much all of the activity of my presidency has been around those issues. And we’ve made considerable headway.

“Is our work done? Absolutely not. But I think we’ve made major progress as an institution.”

As of July 1, Lightstone begins an administrative leave that will help him re-immerse himself in his research as a historian and anthropologist in religion. Asked what he will feel best about, when he looks back on his presidency, he pauses.

He points out that some of the most important advances are not made of bricks and mortar, that Brock offers one of the best student experiences for a mid-sized university in Canada, in part because it has embraced a bigger culture of experiential learning, from highly formalized to much less formalized.

As for himself personally, “I am looking forward to teaching again. A change is as good as a vacation. There will be some vacation, but not so much as one would expect. I think I’d get bored just sitting around.

“What will be nice is not working more or working less, but having more flexibility in how to schedule my work. I have four grandchildren and they’re still at an age when they like to play with their grandparents. That won’t last too much longer.

“I depend on the incredibly competent senior team of the University, and they know it, but I don’t think anyone fully understands the mindset that comes with knowing that … the buck stops with me. That’s just an ever-present, underlying sense that, ultimately, I’m accountable.

“He solidified our position as a comprehensive university. When Jack arrived, this was something that was just starting to happen, and here 10 years later he has proven that we belong there.”

“And he supported our emphasis on transdisciplinary research, something that other universities are starting to follow. Jack carved out a space for Brock as a centre of 21st-century research and scholarship.”

John Suk, Chair of Brock University Board of Trustees:

“Jack has put Brock on the map! He has enhanced its reputation, dramatically improved its physical infrastructure, increased its research focus and the number of graduate programs. He has taken Brock down from the hill and into the communities of Niagara, and the most shining example of this is the MIWSFPA.”

“Jack has set Brock on a trajectory of greater success and impact in the coming decade, and has enhanced its leadership and financial impact on the Region.”

“I can think of no one who has demonstrated more passion and enthusiasm for an institution than what Jack Lightstone has for Brock University.”

“His ability to identify the genuine needs of Brock and to marshal compelling reasons for provincial funding has been the hallmark of his term at our local university. The tangible results of his efforts are evident, including convincing the provincial government to provide the $33 million for the new Cairns science building, $26 million for the Marilyn I. Walker School of Fine and Performing Arts in downtown St. Catharines and $10 million for the Goodman School of Business.”

“Not only has Jack been an unrelenting advocate for Brock University, but he has also been a great ambassador for the entire Niagara Region, with his counsel and advice being sought by those in leadership positions in our part of the province.”

“Jack is a valued colleague. We had a three-year overlap as presidents of our respective universities, me in my last three years at Trent and Jack in his first three at Brock… Jack was not shy about ensuring what was good for Brock was on the table and importantly, he demonstrated time and time again, an important perspective on what was important for the sector as a whole.”

“He’s a gentleman and a scholar, a major contributor to higher education in the province, he’s tenacious at times, capable of seeing and arguing the big picture and yet ever so conscious of working towards the best interests of the Brock community. Best wishes, Jack, as you pursue the next steps in life’s journey.”

“In my time as President of Ryerson University, Jack was a great colleague and friend. Jack always put Brock first, but he also saw Ontario as a system where we helped each other.”

“In all my discussions with Jack, students were always number one. Jack will be missed for his leadership and friendship.”

“It has been an absolute privilege to work with Jack over the past 10 years in helping to transform our community. His vision for the possibilities of both Brock and our community emboldened many to believe that we could reach new heights.”

“With strong leadership and courage, Jack has changed the course of Niagara’s future by building a world-class university, and strengthening Brock’s place within the economic, cultural and social fabric of Niagara. Thank you Jack – your legacy will be felt for generations to come.”