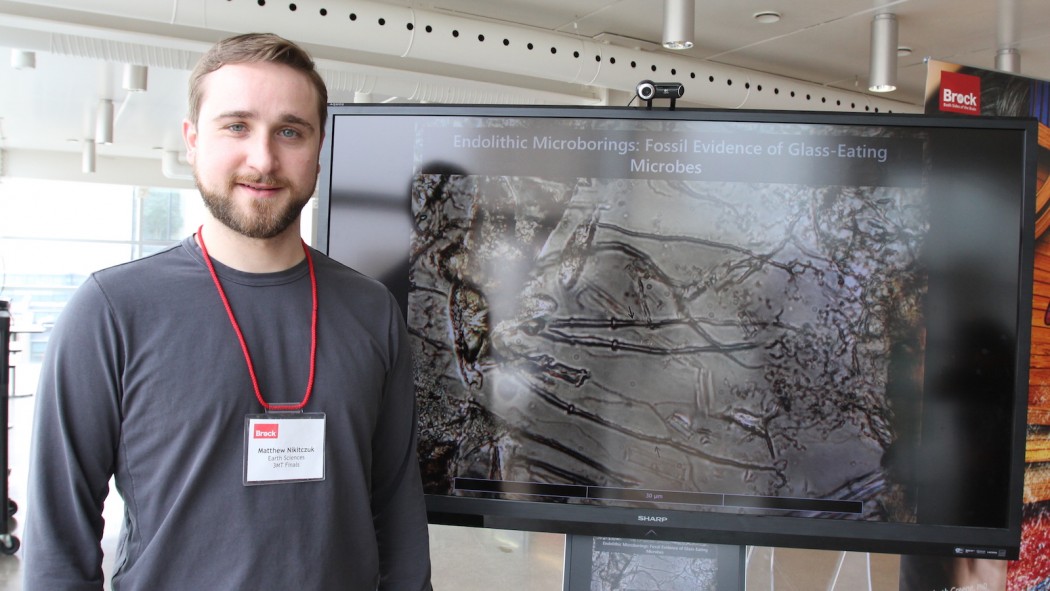 When you ask people to tell you their motivation for pursuing a certain challenge, many times the response boils down to one basic thought — because it’s there.

“Basically I asked myself, why wouldn’t I try, and I couldn’t come up with a sufficient answer,” says the master’s student in Earth Sciences and Brock’s 2015 3MT champion.

The 3MT contest has been around since 2008 when it was held for the first time at the University of Queensland in Australia. It has caught on quickly with graduate students at universities around the world as a new way to tell research stories. Now in its fourth year at Brock, the contest requires graduate students to talk about their research in a way that will captivate the interest of people outside of their disciplines. The challenge is to give a compelling presentation in three minutes or less, while using only one PowerPoint slide.

Nikitczuk won $500 as Brock champion and went on to represent the University at the Ontario 3MT finals. His presentation highlighted his research that concerns a particular type of micro-fossil produced by microbes that eat volcanic glass. The implications of his study shed new light on early life on earth, and possible life elsewhere.

The 2016 call for 3MT Proposals is now open to Brock graduate students who want to have a fun and challenging way to talk about their research and, in the process, expand their research communications skills. The call for 3MT Proposals will close on Jan. 25. Complete contest details and the online submission form for proposals can be found online.

Graduate students who are interested in competing this year are invited to a coaching workshop, Performing the Text, on Saturday, Jan. 16, from 9 a.m. to noon. For more information and to register for the workshop, visit VITAE.

“When I first heard about the contest as an undergraduate student I was interested,” Nikitczuk says. “I was in the last year of my master’s research and I realized it was my last chance to participate. It’s a good all around experience. It gives you and your research a chance to get publicity.

“It helps you improve the skill of communicating complicated themes simply. You get to meet other fellow contestants, make new friends, and learn about what other types of research are going on. It looks good on a CV too.”

Videos of the presentations by Nikitczuk and the other 2015 finalists are posted on Brock’s 3MT website.


Nikitczuk shares other thoughts about his 3MT experience, along with some tips for this year’s participants.

Why did you decide to take part in the 3MT contest last year?

“Based on how well my research had been received (e.g., conference poster presentations), I believed that it would also be of wider interest to a general audience. It is not a large field and not a very well known phenomenon so I felt I could shed some light on it. I also believed that my presentation skills have improved enough and had been told that I am engaging to watch so I figured I might have had a shot at it.”

How did attending the Performing the Text coaching workshop help you to prepare for the contest?

“I was given feedback from someone who is not familiar with the content so I was able to get the perspective of a general audience. Some tips on which parts are more important to emphasize and tone were helpful.”

As a Brock champion and Ontario finalist, what are your top tips/pieces of advice for competing in the contest?