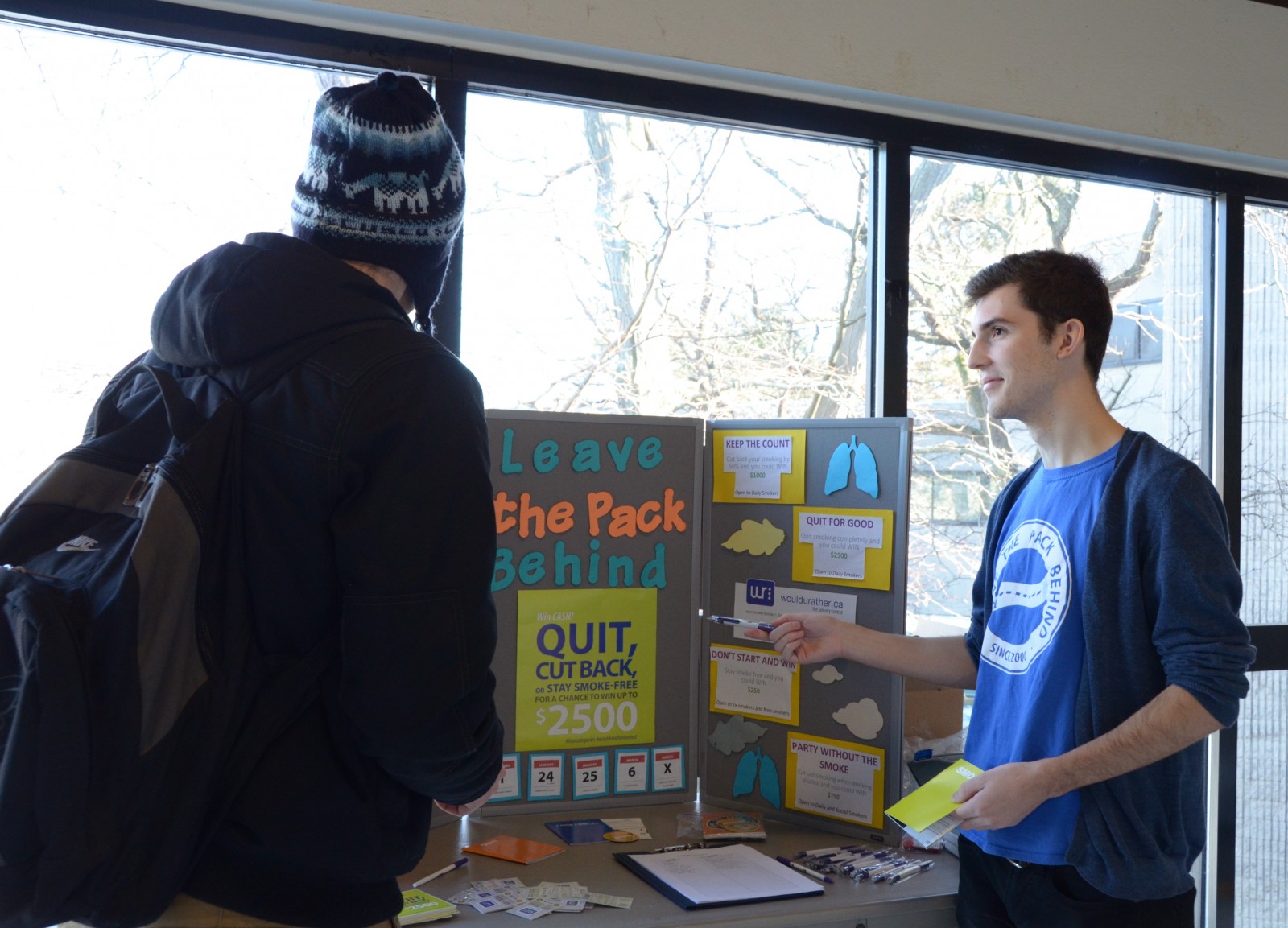 Grant Hayward, member LTPB communications team, was in the Mac Chown A Block hallway this week speaking with students about strategies for quitting and the benefits of the wouldurather Contest.

“I’m not a smoker. I just have a few cigarettes when I’m at a party or when I’m trying to relax on the weekend.”

“Yeah, I smoke sometimes, but I’ll quit later, after I get my degree.”

“I’m a smoker and I know I need to stop, but it’s really tough and I don’t know how to do it.”

For these young adults, health researcher Kelli-an Lawrance and her colleagues at the Leave The Pack Behind program are offering a daring way to kick off the new year.

It’s a six-week contest, opening Jan. 25, that challenges participants to change their smoking behaviours at various levels. Registration for the contest closes at midnight on Jan. 24.

“We’re giving people a really powerful trigger and motivator to quit,” says Lawrance, associate professor in Brock’s Department of Health Sciences. “They can win big money prizes and know they’re with a community of other people who are trying to quit at the same time as them.”

There are four categories in the wouldurather contest: Quit for Good (stop smoking altogether); Keep the Count (cut smoking by 50 per cent); Party Without the Smoke (cut out smoking when drinking alcohol); and Don’t Start and Win (non-smokers and ex-smokers staying smoke free).

“Up to 20 per cent of those entering the contest will go on to quit smoking for good, depending on the category they enter,” explains Leave The Pack Behind manager Heather Travis. “They’re building their confidence in themselves and in their skills and seeing that they can quit tobacco.”

The contest is one of many tools that researchers and staff use in the Leave The Pack Behind program, a province-wide tobacco control initiative started by Brock University that offers young adults smoking and quitting information, resources and personalized support. Students at Brock University in 1969 can be seen working near ashtrays in this archive photo.

Lawrance devised a plan in which student research teams, peer educators and doctors and nurses on post-secondary campuses would help students reduce, eliminate or avoid tobacco use.

With a modest grant from the Ontario Ministry of Health, Lawrance reached out to five other post-secondary institutions to launch the Leave The Pack Behind Program in 2000.

Sixteen years later, with funding close to $1 million annually, Leave The Pack Behind is found on every university and college campus and in 36 public health units across Ontario. All young adults from 18-29 years old are able to access, at no charge, such resources as a series of Quit Smoking booklets, programs and tips on the website, counselling and, while supplies last, nicotine gum and patches. Social media and smoke-free policies are also used to support smoke-free living.

But Leave The Pack Behind is not just a service. The program is also a platform for Lawrance’s ongoing research on how and why young adult smokers quit, what strategies they prefer, the outcomes of these strategies, and whether health professionals support smoking cessation among older teens and young adults.

One discovery in Lawrance’s research, for example, is that when health professionals ask young people if they are smokers, many young people answer that they are not, when in fact they smoke during parties, in pubs or other situations.

“We were missing many, many opportunities to intervene with people who smoke,” says Lawrance, adding that in subsequent medical education sessions, health care professionals were encouraged to ask young adults, “do you ever smoke cigarettes” instead of, “are you a smoker?”

She and her research team also found that most campus physicians ask their patients about their smoking, but few provide identified smokers with support for quitting. Also, many young adults believe that their smoking is just a temporary phase that they can end fairly easily. Most young adult smokers say they want to quit.

Regarding interventions, “mostly what we find is that people just want to quit on their own,” says Lawrance. “They really want to take the little booklets, they want to read the booklets, get the information online and quit.”

Nationally, in 2014, 18.1 per cent of Canadians aged 12 and older, roughly 5.4 million people, smoked either daily or occasionally, says Statistics Canada.

But there’s good news concerning young adults. Statistics Canada notes that, “in 2014, 55 per cent of Canadians aged 20 to 24 had never smoked which is significantly higher than the 39 per cent of 20 to 24 year olds who never smoked in 2001.”