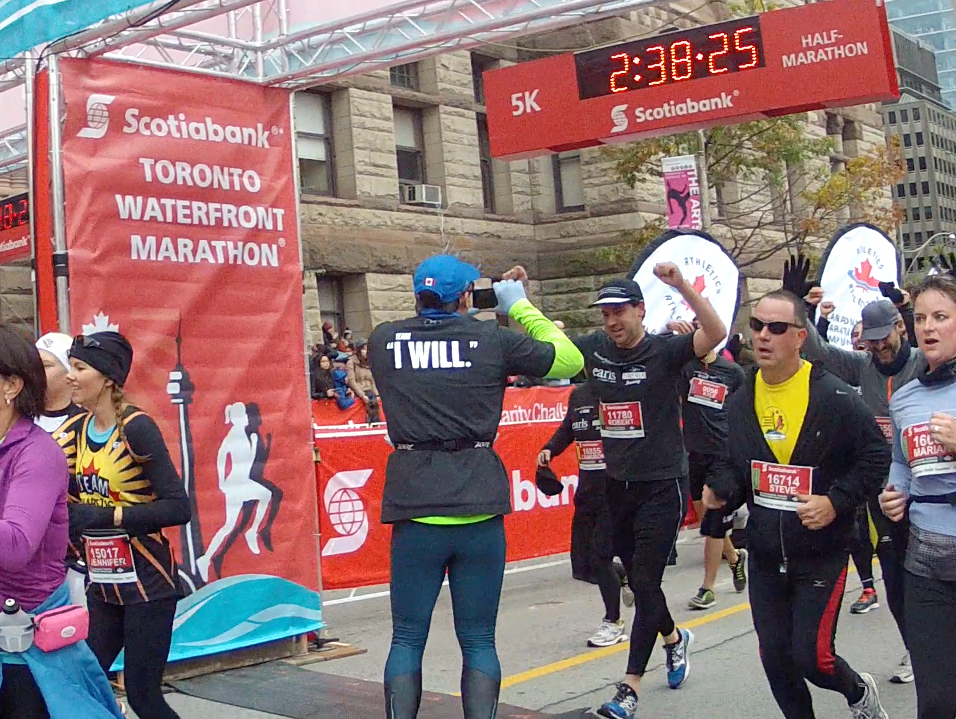 Robert MacDonald crosses the finish line in the Scotiabank half-marathon in Toronto.

Three years ago, Robert MacDonald didn’t know if he’d ever walk again. Three weeks ago, he ran a half marathon. Pushing your body to run 21.1 kilometres is no small feat for any runner. But, for MacDonald it was closer to a miracle.

The 29-year-old Brock University political science graduate (BA’10) was paralyzed after falling 30-feet from a balcony in Mexico. MacDonald broke nine vertebrae, 11 ribs and his scapula. He also suffered a punctured lung.

He was given a five percent chance of ever walking again.

“It was a really dark time in my life,” he says.

However, he says he never gave up hope or his “I will” attitude.

“What could have been a tragedy is now a triumph,” he says.

MacDonald credits perseverance, luck, amazing health care and Toronto Rehab with getting him back on his feet.

About a month after his accident, his friend and fellow Brock grad Eric Humes told him that one day they’d run a marathon together.

“At the time what he said, it was so unrealistic . . . it was so far out of reach,” MacDonald recalls. “I couldn’t move anything in my legs but it stayed in the back of my mind.”

A year ago, MacDonald told his physiotherapist that he wanted to train for a marathon and “turn jogging and limping into a better run.”

“The reason I ran was to motivate myself, inspire others and give back to Toronto Rehab,” he says.

He accomplished all of those things when he completed the Scotiabank half-marathon.

He reached out to his friends and family, bringing together a team of 72 runners who together raised more than $73,000. MacDonald raised nearly $20,000. Their motto: “I will.”

Toronto Rehab helped me so much on my journey. Without them I wouldn’t be able to run.

It’s a mantra MacDonald wrote on a board in his hospital room. It meant something different depending on the day, but always remained a message of encouragement. “I will do something more each and every day,” he told himself.

MacDonald says what started out as a fundraiser turned into so much more. He values all of the feedback he’s received from his teammates and people who have been inspired by his story.

Being an inspiration has inspired him.

“Toronto Rehab helped me so much on my journey. Without them I wouldn’t be able to run,” he says. “The money we raised will help the next me.”

His accident happened on his third day in Cabo San Lucas in December 2012. The friend he was sharing a room with fell asleep and MacDonald couldn’t wake him. Rather than walk the 15 minutes back to the lobby, he made a split second decision to climb to the third-storey balcony.

His shoulder dislocated – from an old Rugby injury – as he attempted to pull himself over the balcony.

“I was literally on the last step to climb over the balcony when it happened,” he says.

He immediately knew something was terribly wrong.

Within 36 hours he was back in Toronto being operated on by a neurosurgeon.

MacDonald is continuing physiotherapy and says his recovery is a life-long process.

“The day I’m dreaming of is when I can go out for a run and I don’t have to think about running,” he says.