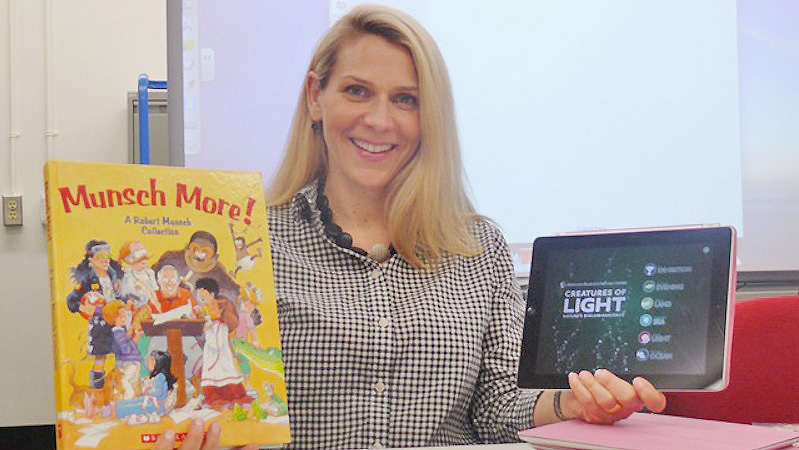 An article in a popular magazine reported recently that excessive video game-playing accounts for boys’ “underachievement” in reading and writing.

But Jennifer Rowsell says her research on the use of new media in the classroom tells a different story.

“Boys and girls are creative. They’re interested and voracious readers and, what is more, they do so many other sophisticated things that weren’t done a decade ago,” says Rowsell, director of Brock University’s Centre for Multiliteracies, The Reading Clinic and professor in the Faculty of Education.

During her five years as Canada Research Chair in Multiliteracies, Rowsell has pursued a number of projects that explore how rapidly developing technologies and new communicational practices can teach children skills and impart information in new and exciting ways.

For instance, with the Minecraft project, a collaborative research project with Rob Simon at the Ontario Institute for Studies in Education, Rowsell came to discover that creating new worlds within this incredibly popular video game has enabled students to gain knowledge and skills.

“I interviewed a young man who created a whole art deco world,” Rowsell says. “It required him to do research on the Internet about art deco, about aesthetics in the 1920s, about the historical time period during when art deco flourished.

“It may seemingly be that students are playing this video game, but actually they’re going out and doing a lot of extensive reading on the kinds of things that inform design processes that they are engaged in.”

She gives another example of a group of girls who used characters from the movie Frozen to write about themselves and conduct research on sibling relationships.

“The arguments across all of the research projects is that, when you actually find out what students love and what they do outside of school, and then you use those technologies, then you start to make school more permeable, more of a contemporary space driven by interest,” Rowsell explains. “Students exhibit motivation and interest when they are motivated by what they love.”

In turn, Rowsell says educators can capitalize on this interest by “harnessing their interest to schooling topics, such as making short films or bringing Minecraft into the classroom.

“So, using the example of the young male student, teachers can say, ‘OK, we will talk about Minecraft, but then we will move over and talk about art deco, and then we’ll move into studying a novel that was written during the age of art deco.'”

The federal government’s Canada Research Chairs program announced recently that Rowsell was among those across the country getting their chair positions renewed.

“Holding a Canada Research Chair is an incredible gift,” she says. “I feel privileged and grateful at the same time. It’s absorbing – I love it.”

In addition to the Minecraft Project, which studied the classroom use of ebooks, iBooks, apps and the Minecraft video game, Rowsell’s other projects include:

• Crayons and iPads, documenting the impact of iPad technology on children’s creativity and output (principal investigator is Deb Harwood)
• Community Arts Zone, which brings into schools drama, movement, photography, music and play-building, expanding the repertoire of children’s literacy; and
• Remaking Families, which studies how families use photographs, Facebook and other technologies to tell their family stories (principal investigator is CRC Andrea Doucet and co-investigator is Diane Collier).

During her next five-year term, Rowsell says she aims to take her projects a step further. “I would like to work more actively with the community, with more schools, to bring into the classroom these multi-modal approaches that will range from using iPads to creative expression of the arts.”

Rowsell plans to arrange for media professionals to teach students the “nuts and bolts” of various aspects of media. She is also involved in a Western University-led research project to investigate the introduction of iCloud technology into schools.

The Canada Research Chairs program invests approximately $265 million per year to attract and retain some of the world’s most accomplished and promising minds. Chair holders aim to achieve research excellence in engineering and the natural sciences, health sciences, humanities, and social sciences.