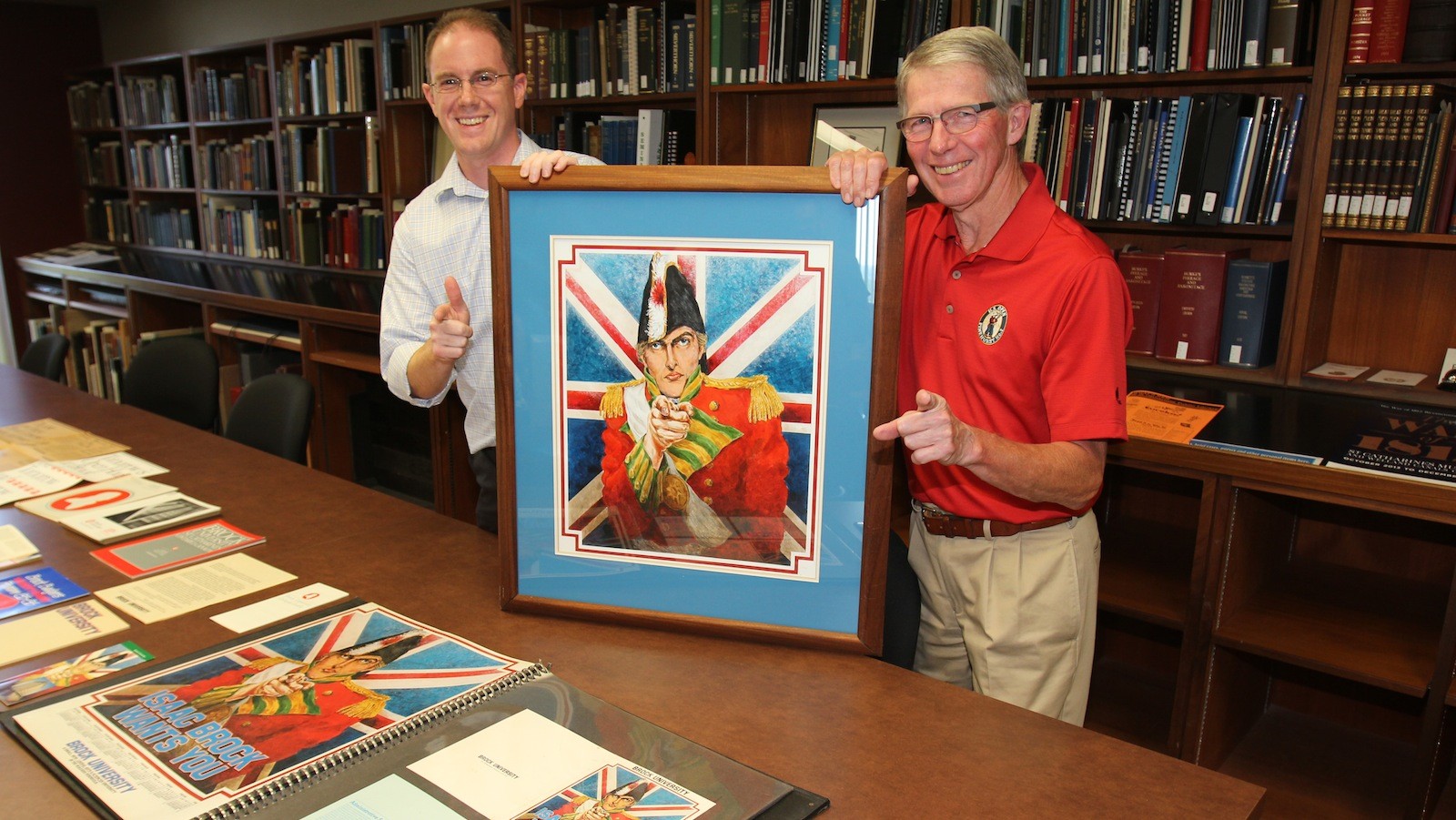 The story behind the evolution of Brock’s visual identity is being preserved thanks to the man who was the creative mind behind University marketing campaigns of the 1970s and ‘80s.

Doug Geddie, Brock’s director of marketing, communications, recruitment and liaison from 1970-86, has donated his personal trove of mint-condition marketing materials to the University, in honour of its 50th anniversary.

Geddie, who later became a nationally-successful marketing consultant, was the creative fuel behind such memorable designs as the Isaac Brock Wants You poster, which was a visual play on First World War recruitment posters. “We stole it, really, from the ‘Uncle Sam Wants You’ and, of course, the Lord Kitchener campaigns,” says Geddie. “I figured if it worked for the Brits and it worked for the Americans, it might work for the Canadians.”

Launched in 1978, the Isaac Brock Wants You poster was designed by St. Catharines ad agency Etcetera and built around an original painting by illustrator, Barb Bedell that is now, thanks to Geddie, on display in Brock’s Special Collections and Archives.

The posters were a hit. Geddie regularly got asked for replacements, as they kept disappearing from the walls of high school guidance departments.

In 1978 the poster won the Time-Life Award for promotional program of the year, and beat out 800 North American colleges and universities to win the Council for Advancement and Support of Education competition, an award it shared with Earlham College of Indiana.

“We still have people ask for them,” says Barb Davis, Brock’s registrar who worked alongside Geddie as a student recruiter in the 80s. “Doug was way ahead of the game in terms of adopting innovative ways to market and to increase awareness of the institution.”

Geddie served under Brock Presidents James Gibson and Alan Earp. He says Gibson had a strong sense of the history – “the Isle of Guernsey, the background of Brock, the Coat of Arms, and all the rest of it” – but never really took it into a marketing or media realm.

Geddie kept working to popularize the University’s graphic identity with its historic namesake, Maj.-Gen. Sir Isaac Brock, and when Earp became President, “I showed him this artwork (for the poster) and he loved it. So we just did it and it took off.” “The best part about it was it helped us in terms of application numbers, which was the real purpose behind the campaign. But it also seemed to have a good morale effect on campus. Faculty wanted it for their office doors and things like that, and it ended up in a lot of weird places.”

Geddie’s other initiatives included the 1977 recruitment poster The first and finest Brock University frisbee factfinder, using a frisbee to explain University departments to prospective students. For instance, the Department of Classics noted the frisbee’s similarity to an ancient discus, while the Department of Physics described how it moved through the air.

He helped create other recruitment tools such as the University’s viewbook, and produced Brock’s first-ever recruitment video, complete with a Battle of Queenston Heights re-enactment that he helped to stage and capture on 16mm film.

“We went to Fort George and got all of the recruits out. They were given permission to have black powder and muskets and all that and run through the woods. They thought it was the greatest thing in the world.”

The film moved on to today’s environmental battles and showed how Brock and its biology department were studying the Great Lakes and the migratory patterns of birds. Geddie also oversaw the creation of the iconic Isaac Brock cameo in the early 80s.

“This campaign, which had started out as a recruitment campaign, became so identified with the University that it just took off beyond belief. So doing the cameo as part of the identity of the University was such a natural progression.”

All the while, the University’s bond with its namesake kept growing. It was around this time that the students’ union renamed the campus pub Alphie’s Trough, after Isaac Brock’s horse, and the general store became The General.

Looking back, Geddie says the Isaac Brock Wants You poster was the spark that led to the creation of the Brock graphic identity, which to this day informs the University’s brand.

“This was so radical at the time that it got us a lot of attention, and helped to create an identity for this new and emerging university.”