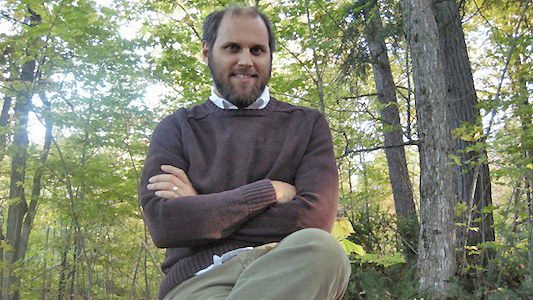 Betts’ decade-long research is in the field of Canadian avant-garde writing. Betts will use his Chancellor’s Chair to focus on the writings and impact of Canadian poet bpNichol, “offering the first holistic study of his poetry, prose, visual art, sound and music compositions, comic books, children’s television, computer art, and more.”

Nichol, who died in 1988, is noted for his “concrete” poetry, groupings of words hand-etched into concrete. Noteworthy works include the “visual book” Still water, the booklets The true eventual story of Billy the Kid and Beach Head as well as the anthology of concrete poetry, The cosmic chef, which won the Governor General’s Award for poetry. Betts calls bpNichol a “radical figure” who taught people how to produce books.

“Canadian literature proliferated in the 1960s in large part because of the groundswell of small press activity, and he was one of our greatest champions of the small press,” Betts says. “What was particularly striking about his work was that he systematically pushed as many boundaries of literary publishing as he could – testing the limits and always expanding them.”

With his Chancellor’s Chair, Betts aims to produce a three-day symposium (November 2014), an edited collection of essays (2015), a public lecture (2016 or 2017) and a scholarly monograph focused on Nichol’s award-winning work and transnational impact on various literary communities (2017).

The Chancellor’s Chair “will also facilitate the creation of an international scholarly network of academics and library staff to be centred at Brock University and focused on Canadian experimental writing and publishing, especially in relation to Nichol’s work and influence,” he says.

The Chancellor’s Chair for Research Excellence consists of an annual research grant of $20,000 over three years. Up to $7,000 per annum may be taken as a release-time stipend.

Recipients of the award present a public lecture as a way of sharing their contributions to scholarship with the university and wider community. They often receive invitations to present at other universities and events.

Offered since 2001 by Brock University to recognize the excellence of the scholarship of faculty, the Chancellor’s Chair for Research Excellence award is intended to encourage and sustain high levels of scholarly performance of faculty and to retain high quality faculty who have made or will make exceptional contributions to scholarship in their field.