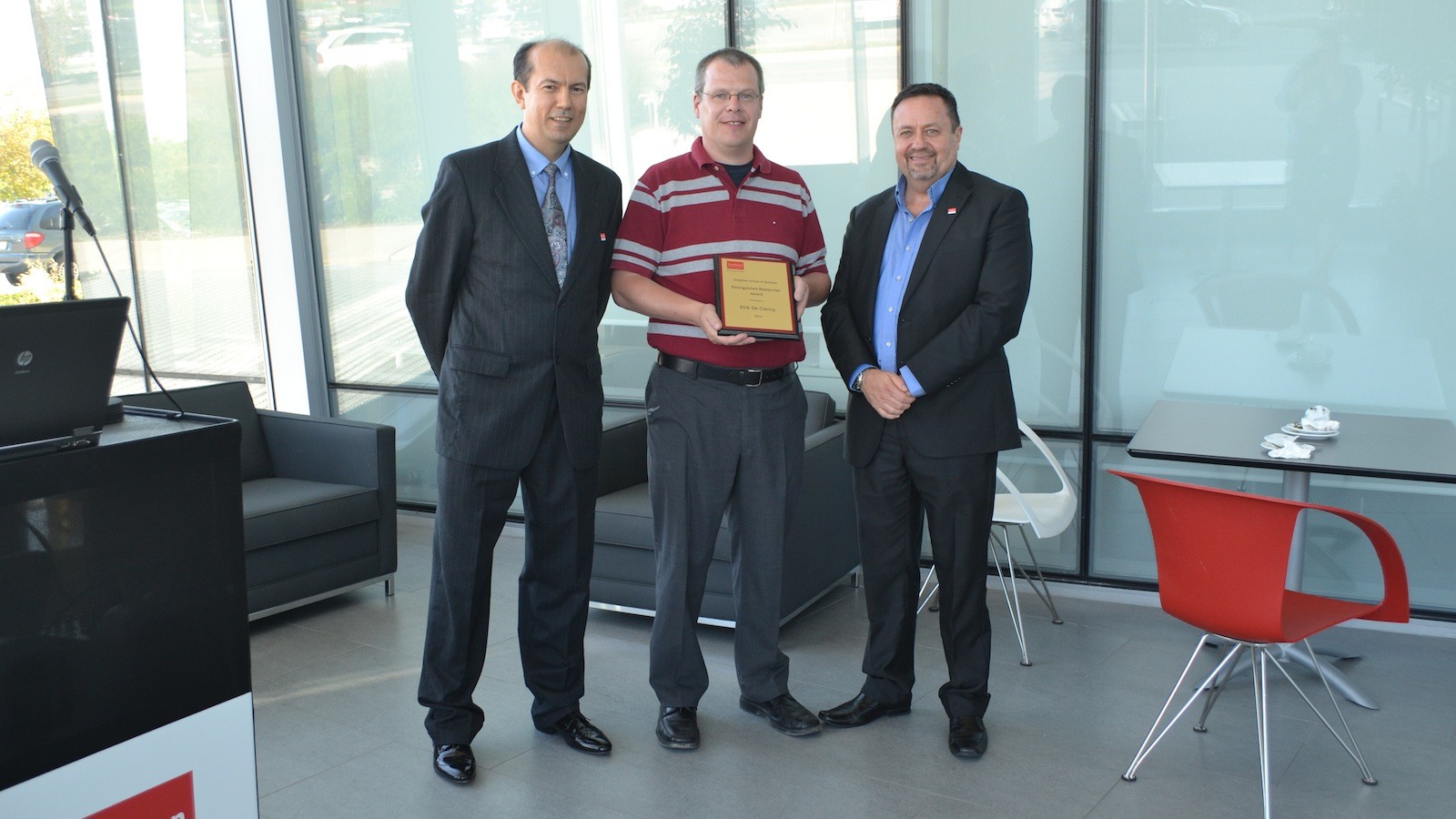 Two faculty members at the Goodman School of Business have been honoured for their academic research contributions in the fields of management and accounting.

The Distinguished Researcher and Untenured Researcher of the Year awards were created by the Goodman School of Business to recognize senior and junior faculty members for their research accomplishments. Recipients of the awards are selected based on the excellence of their research-related activities, including their publication, grant and award record. Tenured faculty, who are eligible to receive the Distinguished Researcher Award, are evaluated based on the last five years while untenured faculty members are evaluated only on the previous academic year.

Ernest Biktimirov, associate dean of research and graduate programs, had high praise for the inaugural award winners when he presented them with plaques at Goodman’s Sept. 8 faculty update meeting.

“Since joining Brock University, Dr. Dirk De Clerck has become a true leader in business research and has achieved a world-wide recognition. His research accomplishments over the last five years are remarkable,” Biktimirov said at the event. “And the accomplishments of Dr. Sohyung Kim over the past year show that it is possible to excel in both research and teaching at the same time.”

De Clercq, recipient of the Distinguished Researcher Award, was recognized for his prolific research record. He was honoured by the award and grateful for the research opportunities available at Goodman.

“Research plays a significant role in the Goodman School of Business, and critically informs what we as faculty teach in our graduate and undergraduate programs,” said De Clercq after receiving his award. “Research is teamwork, so I am also grateful for the many colleagues, inside and outside Brock, that I have had the opportunity to collaborate with on different research projects.”

Kim, recipient of the Untenured Researcher of the Year Award, was recognized for his contributions as an early career researcher. Last year, Kim published a single-authored paper in a journal from the Financial Times 45 list. Another of his papers received “Outstanding paper award” from the journal’s editorial team. He also received a grant from the CGA Ontario Research Excellence Fund and was the recipient of the student-voted 2013-2014 Graduate Professor the Year Award.

Like De Clercq, Kim recognizes the impact and influence of his colleagues.

“I’d like to thank my department members for their encouragement and for allowing me to be here at Brock,” said Kim. “It is such an honour to be recognized as an excellent researcher among untenured faculty members.”

And Kim, who began teaching at the Goodman School of Business in 2010, has no plans to slow down with his research output.

“I feel so undeserving of this award given how little I accomplished so far. I will take this award as a sign from Goodman to aim high and I will try to follow that sign for the rest of my career as a researcher.”

Both De Clercq and Kim will be presenting their research at a yet to be determined session of Goodman’s Luncheon Speaker Series.