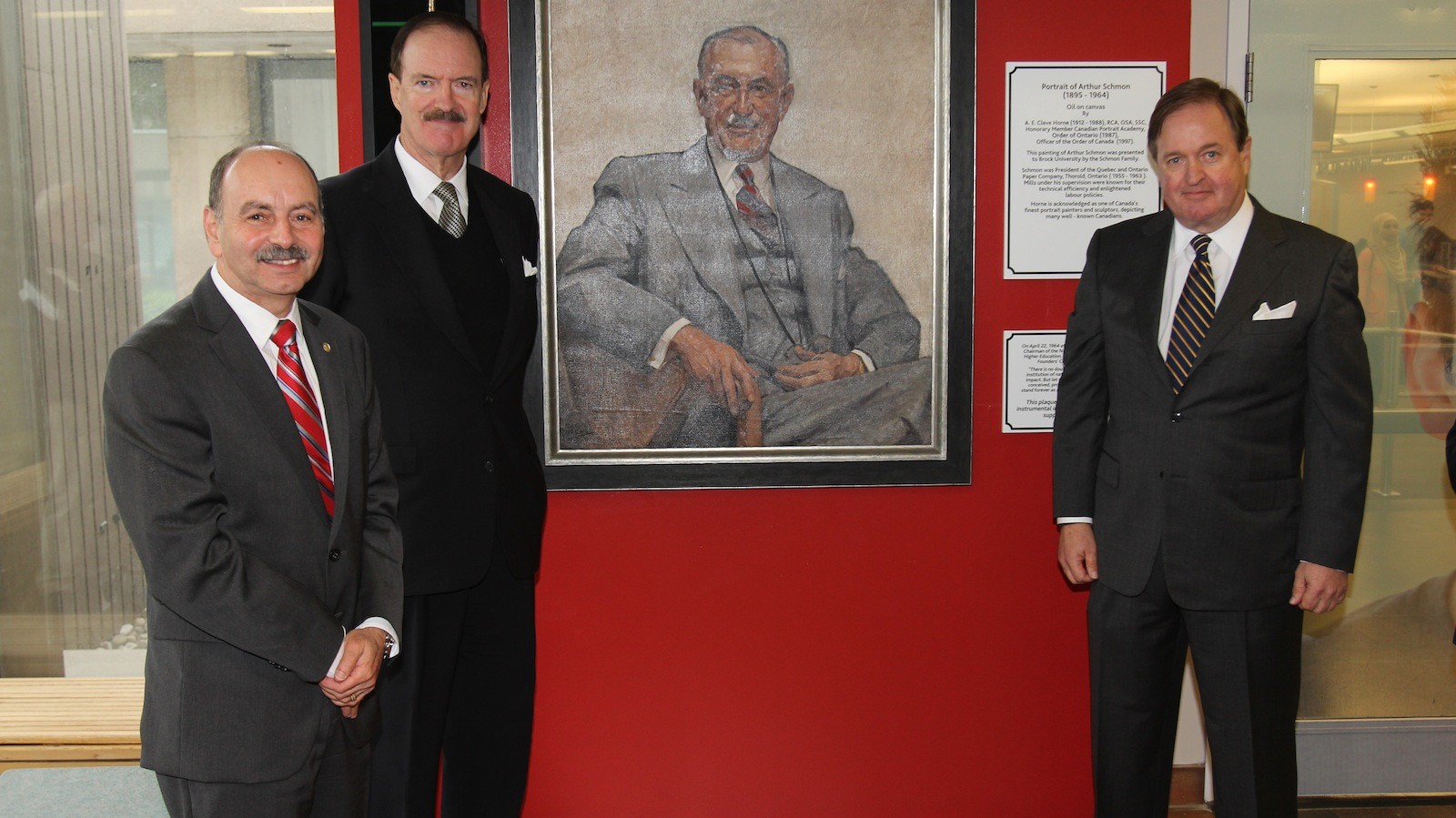 Brock University President Jack Lightstone (left), Robert Schmon (centre) and Art Schmon stand in front of the portrait of Arthur Schmon, which was unveiled Thursday after the rededication of the tower which bears Arthur's name.

The rededication of Arthur Schmon Tower paid tribute to one of the visionaries who was instrumental in bringing a university to Niagara.

“The Tower is not an Ivory Tower, it is a beacon,” Brock President Jack Lightstone said. “And as a beacon it shines its light in and on the students who come here and the communities that surround it. May it always be such a beacon and may Arthur Schmon’s name always be associated with that beacon of light.”

Rooted on the Niagara Escarpment and visible for miles in all directions, the 14-storey landmark structure was originally called Brock Tower. In June 1983, the tower was renamed for Schmon in recognition of his pivotal efforts. Chairman of the University Founder’s Committee, Schmon worked for years to help establish the University but did not live to see the dream become reality. He died from cancer six months before Brock opened its doors in the fall of 1964.

“Arthur achieved a great deal during his lifetime, but I can’t help but think that nothing would have thrilled him more than to see Brock University today,” Art Schmon said. “To see that his last great passion has become one of Canada’s finest universities and a world-class institution of learning.”

“For us, today rings with the power of remembrance,” Robert Schmon said, “and I can only imagine how Gompy would feel if he could see us all here right now, and see what his dream of a university in the Niagara Peninsula had become.”

Thursday’s celebration also featured the unveiling of a portrait of Schmon along with a gold-handled cane that belonged to him in the tower lobby at Brock. Schmon’s family also donated three boxes of records to the University’s Special Collections and Archives relating to his time as an officer in the First World War. These primary documents include correspondences between Schmon and his wife, maps, photos and books.

The gathering brought together some of the most celebrated and influential figures in Brock University’s history. Special guests included past University presidents and chancellors, long-time supporters and early founders of Brock, original faculty members, past and present members of the Board of Trustees, alumni, and staff and student representatives.

Alan Earp, David Atkinson, Terry White and Jack Lightstone created a small piece of history when the living Brock presidents posed for a photo in the Schmon Tower lobby.

“It was very unique,” said White, who served as Brock president from 1989-1996 and now lives in Alberta. “When we had the 25th anniversary we had just three presidents. James Gibson (Brock’s first president) was there, Alan Earp was there, and myself. Today, to have everybody here except for James, it’s been great. Each of our own times we had similar problem, trying to find the resources so that our people could do their work and the students could study.”